As the capital of China and one of the biggest cities in the country, Beijing is home to all kinds of snacks around the country, even from all over the world. Unique local snacks in Beijing usually have a long history. There are a lot of variety of famous snacks, which has been know for hundreds of years. They are usually made with dainty materials and fine procedures. Here TCT would like to introduce top 10 famous snacks in Beijing for your reference.

Mung bean milk, also known as Fermented Soya-bean Milk, is a by-product of cellophane noodle production. It is made from mung beans and the procedure of producing is quite similar to that of soy milk. It is in gray-green color and tastes a little bit sour and sweet, with an swill-like smell. Although mung bean milk doesn’t smell appetizing or look good, the majority of local Beijingers fall over themselves for it, especially in spring and winter. Mung bean milk belongs to be a kind of healthy food, containing lots of Vitamin C, sugar, fiber and protein. For most Beijingers, drinking Mung bean milk is a kind of enjoyment, but for the people who taste it for the first time, the swill-like smell would make it hard to swallow.

Mung bean milk is actually a by-product while making Mung bean starch or noodles. Mung beans are soaked before it could be peeled. Then grind the beans into paste and pour it into a large tank for fermentation. Under the fermentation, the sediment to the bottom of tank starch, the upper liquid is regarded as Mung bean milk. After fermentative Mung bean milk should be boiled with water before it can be drunk.

Where to eat: to taste the authentic Mung bean milk, you can go to the old stores in Laociqikou or Huguoshi Temple, where sells tasty Mung bean milk. 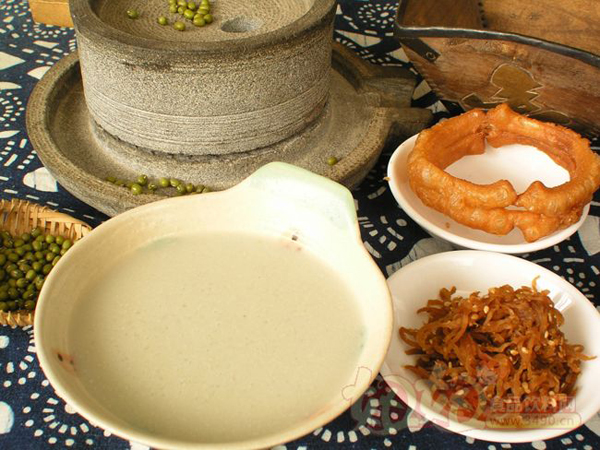 Wheaten cake boiled in meat broth, called “Lu Zhu Huo Shao” in Chinese, is a kind of traditional snack in Beijing, dating back 100 years to the Qing Dynasty (1644-1911). Baked wheaten bread, pork chop, tofu, pork lung and chitterlings are cut into pieces and then boiled in the preserved meat broth. It is served with chili oil, fermented tofu, mashed garlic, vinegar, coriander and chives. This snack was quite popular among the ordinary people in the old days, for meat was too expensive for them while the offal became a cheaper choice to eat meat. Native Beijingers love “Lu Zhu Huo Shao” very much.

Where to eat: there are innumerable restaurants serving Wheaten Cake Boiled in Meat Mroth in Beijing. One of the most famous one is the century-old "Xiao Chang Chen". If you have local friends in Beijing or you have private tour guide while touring in Beijing, you can ask them to take you to taste the most authentic one in the city. 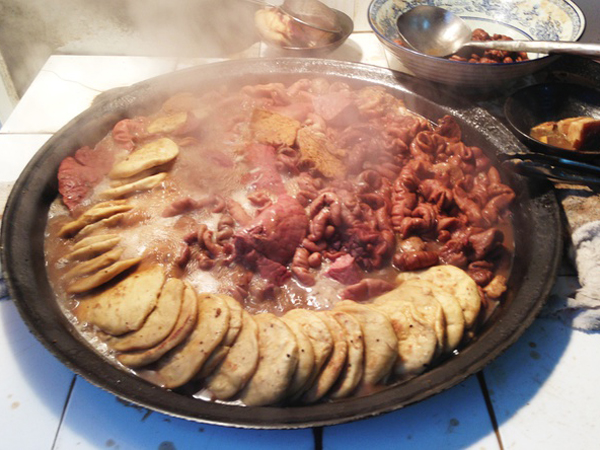 Stewed Pork Liver, called Chao Gan in Chinese, is a kind of unique snack in Beijing. The history of it can date back to the Song Dynasty (960-1279). Stewed Pork Liver was developed from two popular food "Stewed Liver" and "Fried Lung" in Song Dynasty. This snack takes cleaned pork liver and chitterlings as the main material, and soy sauce, pepper, aniseed, cinnamon, fennel, bay leaves, green onion, ginger, garlic, starch and some other ingredients as accessories. The cleaned chitterlings are cut into pieces before being boiled in water. They are then stewed in mushroom soup with garlic sauce, chopped spring onion, chopped ginger and pork liver. Mashed garlic and Chicken soup should be added before it is ready to serve. This dish looks glossy dark red and the chitterlings and pork liver are tender. Stewed Pork Liver used to be served with small dumplings, and this becomes the most popular way to enjoy the dish. 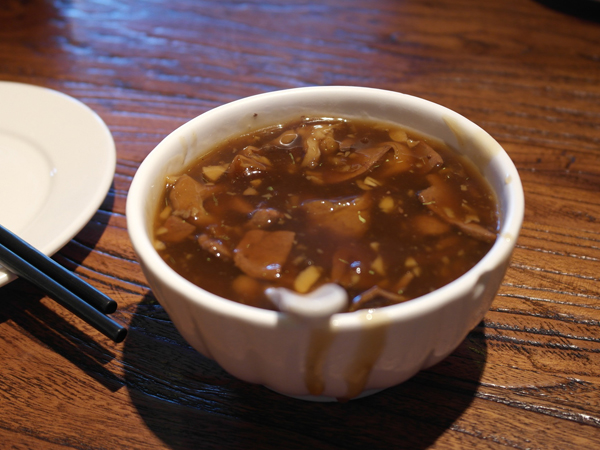 Fried Beef Tripe, or called Bao Du in Chinese, has been a traditional snack in Beijing since the era of Emperor Qianlong (1735-1795) in Qing Dynasty. It is a general name of the snack and it can be called as Lamb Bao Du or Beef Bao Du, for it is mainly made and served by the Hui people. The most important ingredient of the snack is fresh lamb tripe or beef tripe. First of all, lamb tripe or beef tripe should be completely cleaned and then cut into slices before it is cooked in boiling water. It is often served with oil, spring onion, vinegar, chili oil, scallions, coriander, sesame sauce, soy sauce, fermented tofu juice and other seasonings. The snack tastes crispy and tender, and the local often eat it with beer, Er Guo Tou or other alcohol.

Where to eat: the most famous restaurants serving Fried Beef Tripe include Bao Du Shi near Beijing Overpass, Bao Du Wang near Dong An Market, Bao Du Zhang in Dong Xing Shun, Bao Du Feng in Qianmen Street, Bao Do Yang in Men Kuang Hutong, etc. The names of them are made of the names of the snack and the family name of the owner. 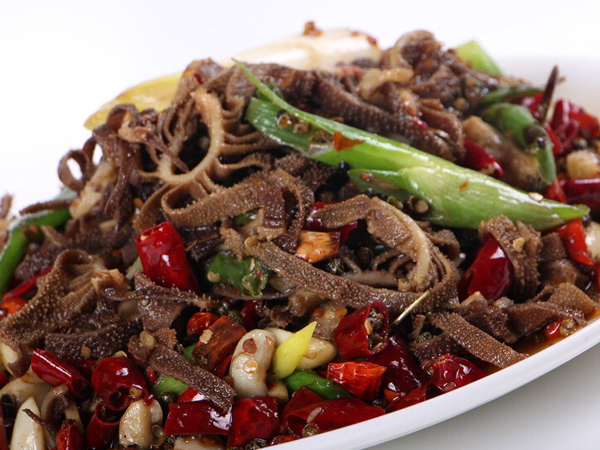 Rolling Donkey, or called Lv Da Gun in Chinese, is a traditional snack with in Beijing and Tianjin area. The history of it is over one hundred years and can be traced to the Qing Dynasty. It belongs to a kind of cake and usually has three colors, yellow, white and red. It tastes sweet and a little sticky, with a very nice bean flavor. The main ingredient includes millet flour, soy bean flour, sweetened bean paste, sugar, sesame oil, osmanthus, and melon seed. Rolling Donkey are steamed glutinous rice rolls filled with red bean paste or brown sugar that is then rolled and covered in a soybean flour crumble.

Where to eat: the famous places to taste authentic Rolling Donkey is in Jiu Men Snack Store, Laoshe Tea House in Qianmen Street and Minfu Restaurant. 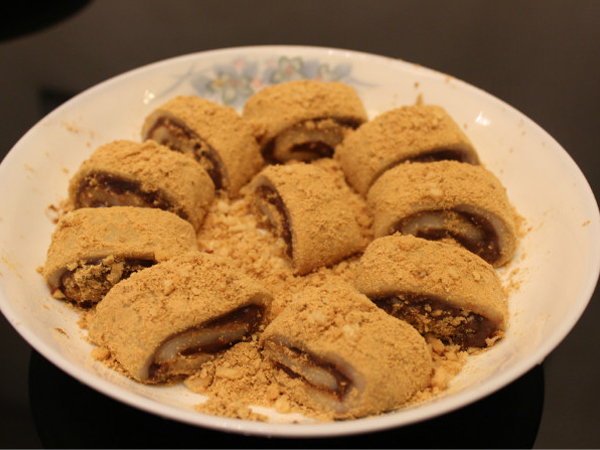 Steamed Rice Cakes with Sweet Stuffing, also called as Ai Wo Wo in Chinese, is a kind of traditional Halal snack in Beijing. It is made of millet flour or glutinous rice with sweet filling. It first appeared in the Yuan Dynasty (1279-1368) and became a favorite snack of the imperial families in the Ming Dynasty. It looks white as snow and tastes sticky and sweet and comes with a variety of stuffing, including rock sugar, sesame, hawthorn, mashed Chinese jujube or green plum fruit. It is quite popular snack in Beijing, especially from the Lunar New Year to the end of summer. Not only Beijingers love this kind of snacks, outsiders would love to taste the famous Muslim snacks too. 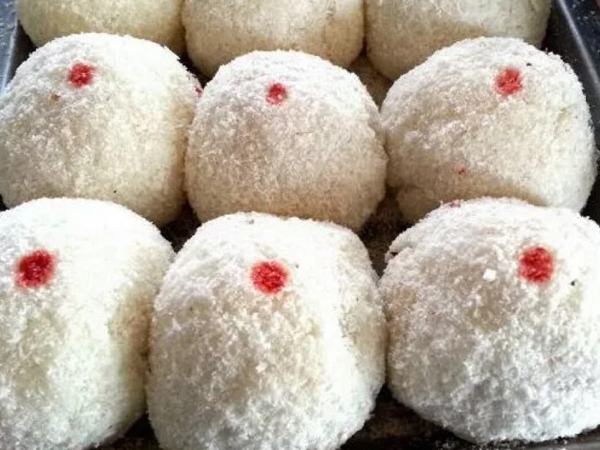 No.7 Noodles with Soybean Paste (炸酱面)

Noodles with Soybean Paste, also called as Zhajiang Noodle in Chinese, The main ingredients of it are noodles, soy sauce, croton, cucumber, etc.

You can find a lot of small stores offering quite delicious Noodles with Soybean Paste. 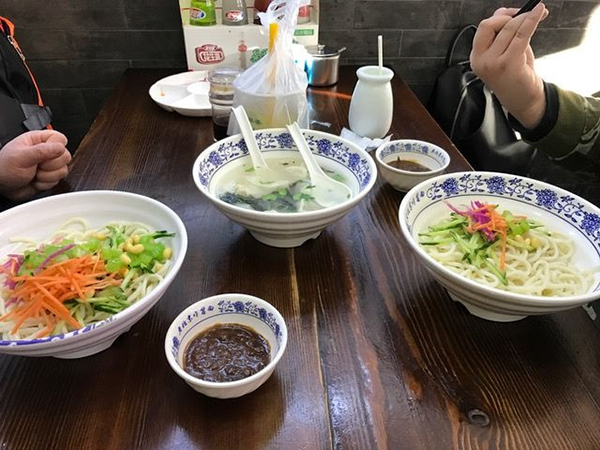 Fried Wheaten Pancake with Fillings, also called as Da Lian Huo Shao in Chinese, is a pan-fried roll filled with different stuffings, including pork with cabbage, pork with fennel, lamb with green onion and multiple vegetarian choices. Like dumplings, they usually go with vinegar. This snack can be traced to the era of Emperor Guangxu (1662-1722) in the Qing Dynasty. The pancakes are fried golden brown, but still quite delicious and soft. Beijingers love to have these pancakes while having a bowl of sour and sweet soup made of tofu and chicken blood.

Where to eat: there are many famous stores in Beijing for tourists to taste authentic Fried Wheaten Pancake with Fillings, such as, Zuo Lin You She, Jie Li Jie Fand, Lao Bejing, etc. Each of them has subbranch stores in different area of Beijing. 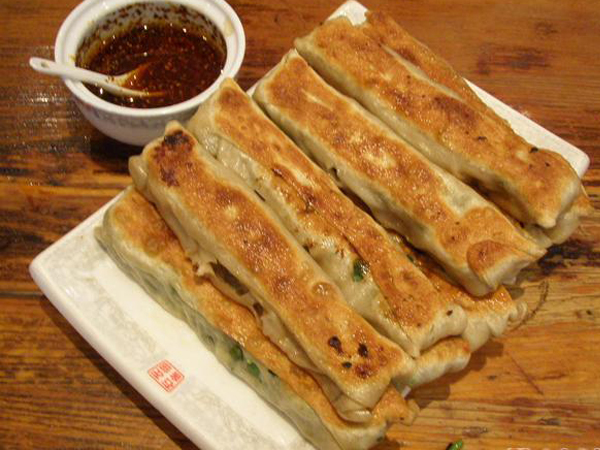 No.9 Sugar-coated Haws on A Stick (冰糖葫芦)

Sugar-coated Haws on A Stick, also known as Bing Tang Hu Lu in Chinese, is a very traditionally famous snack in Beijing area. It uses bamboo stick to string together the wild fruits, then dipped in malt syrup, which is quickly harden when it is in the air. It is a common snack in winter in the north of China. The material usually includes hawthorn, grapes, walnut meat, bean paste, etc., it tastes sweet and sour.

Where to eat: you can find it at Wangfujing Street 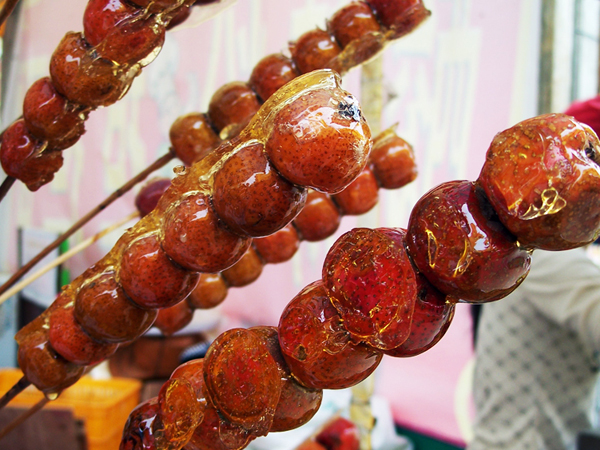 Where to eat: Feng Nian Guan Chang (located in 16 Fulong Temple Street) is the most famous store that serve authentic Filled Sausage. You can also find the snack at many local restaurants. 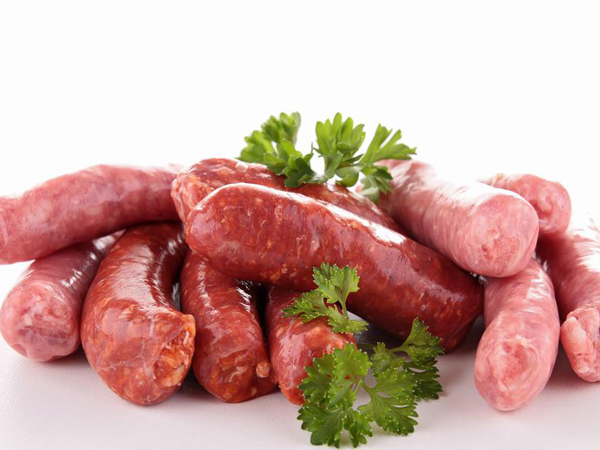 These are top 10 famous snacks in Beijing. They are must try ones when you visit this city. Also, there are many other delicious food that haven’t been introduce in the article, you may explore by yourself.