Guilin is situated in a important place of south of the Five Ridges, since the ancient times it was a place gathered official business, and its eating habits and style was blend with the north and south, like Guangdong, Sichuan, Hunan, Zhejiang, Hiangxi, Fujian. Since the last century, affected greatly by the Cantonese and Sichuan food, and integrated with the local eating customs, the food in Guilin is almost with spicy and sour in each meal. And because of the development of tourism, Guilin gradually formed local characteristics snacks. Guilin rice noodles, nun noodle, glutinous rice cake, bean stuffing glutinous rice, and Shatian pomelo and so on are the characteristics of Guilin cuisine.
Water Chestnut Cake
Water Chestnut Cake is delicacies of Guangdong. Water chestnut cake’s main ingredient is sweet potato flour and stir with water and sugar, then put them into the mold and sprinkles some of water chestnut, set fire to steam, later you can take out and eat it. Its making method is simple, and taste sweet with tangy fragrance, soft, smooth, refreshing. Commonly you can buy in the vendor’s stand in the street. The Water Chestnut Cake stall is spread around the street corner. Passers-by can buy and eat immediately which is so convenient.
Guilin Rice Noodle
Guilin Rice Noodle is as famous as Guilin landscape. With well-made rice noodle, it is smooth and delicate on the palate and has a silky mouth-feel. The most important ingredient of Guilin rice noodle is the production of marinade, basically boiled out with pigs, cattle bone, fructus momordicae, and all kinds of seasoning, therefore the flavor is aromatic. According to legend, when Emperor Qin Shi Huang digged Lingqu Canal, the marinade was to use the local Chinese herbal medicine to make medicine soup, and it can solve the problem of endemic unacclimatized after the officers and men drank, and it was also good for health. After generation’s improvement and processing, it becomes a unique flavor of Guilin rice noodles. 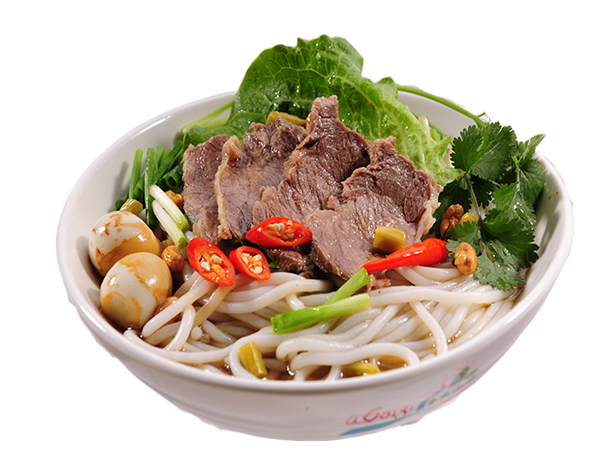 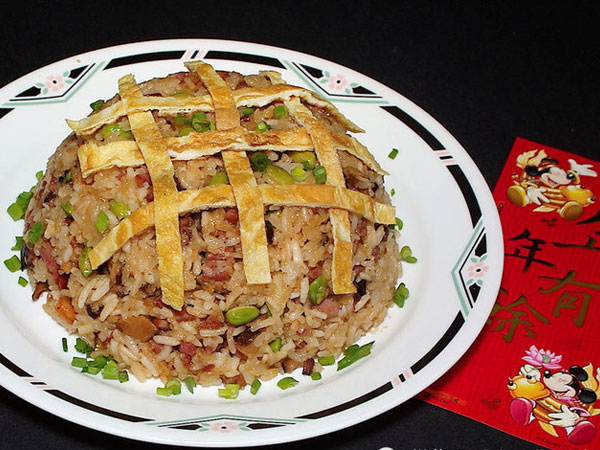 Bean Mash Sticky Rice is made with superior glutinous rice and then steam to make it as rice cake, the main stuffing is sweet bean, then mix with roasted sesame seeds, add some chopped green onion, oil, rice, which is fresh fragrance filling. Combined with sausages, cooked beef fillings of salty sticky rice, it is also delicious. With some pepper, it will taste better. 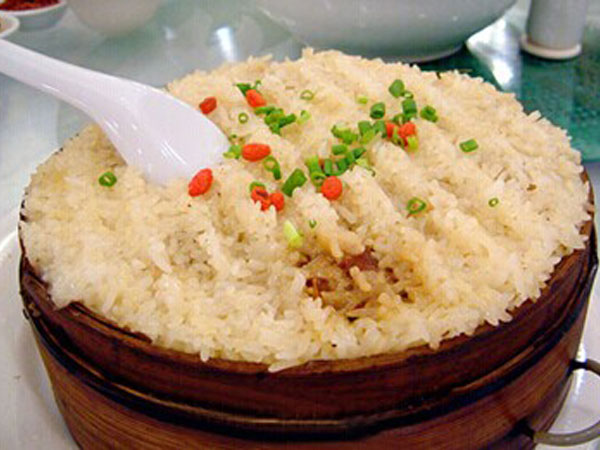 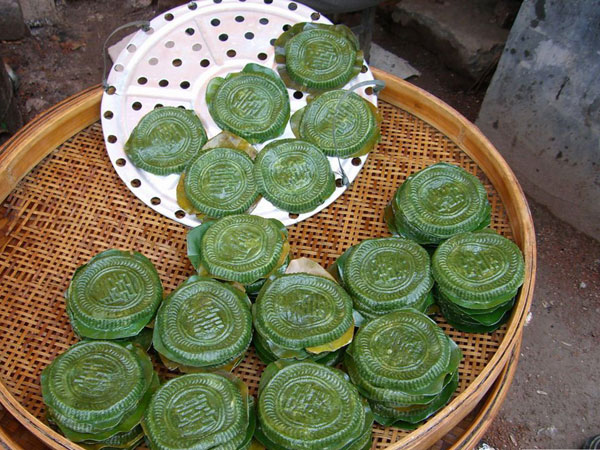 Guilin Field Snail
Guilin Field Snail is a very local characteristics snack in Guilin. You can find this snack at street vending, or any lower or higher level restaurants. Guilin Field Snail is short and round with sharp and hard tail. The meat of the snail is firm and big. As living in the paddy fields or ponds, the snail meat is cold and sweet, rich in protein and vitamin C, calcium and other minerals, can clear heat, improve eyesight and engender liquid. 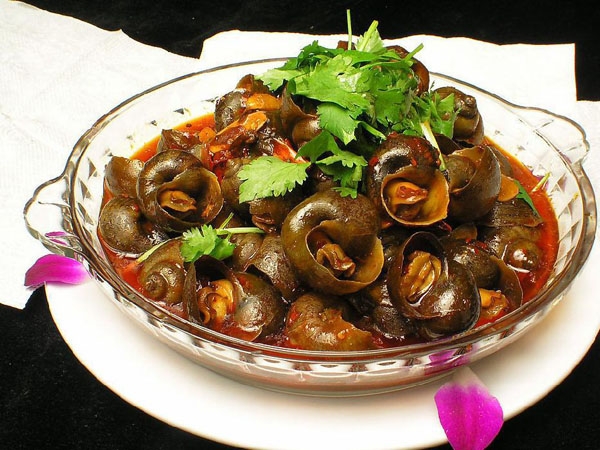 Cooking Field Snail is very particular. The snails brought from the market should be raised in clear water for several days, and change the water everyday, until the snail spit all the mud and excrement. And then, brush the dirt attached to the shells and cut the tail, easy to suck out the meat.
When cooking the snail, add oil, salt, ginger, ginger, Sanhua alcohol, sour bamboo shoot, sour peppers, basil leaves, star anise, strawberry, hot fry the use of force, and then put into the pig bone soup simmer for about 2 hours before fried again, very tasty. Before eating, then add garlic, onion and other spices. The soup is Guilin Field Snail’s essence; use it to make snail rice noodles, the spicy would make you sweating on the forehead, very enjoyable.
Main Materials: Field Snails, basil leaves, chili, pig bones
Cooking Method: Raising the snail for three to five days, until the sand spit out. Cut down its sharp tail. Fried with oil, salt, ginger and wine in hot pot, then add basil leaves, chili, pig bone soup simmer together.
Features: spicy and fresh, mellow and refreshing. When eating, open the snail cover, drink and suck the soup and meat. 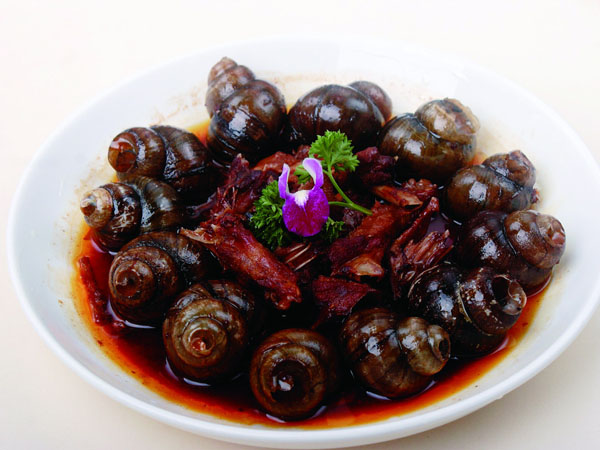 Gongcheng Oil Tea
Gongcheng people drink oil tea every morning. Some families even drink oil tea as three meals a day. The oil tea is not just boiled but also made by hammer in the pot. Guilin has many counties drink oil tea, but Gongcheng oil tea is the most famous one.
The oil tea in Guilin uses old leaves of black tea as main material. People often fry the tea until it a little burnt and appetizing, then add salt and water to boil it. Most of people add ginger. The oil tea tastes strong and astringent, with piquancy. Some areas in Gongcheng add peanut powder, making the oil tea less astringent, which making Gongcheng oil tea the best, famous in Guangxi Province. 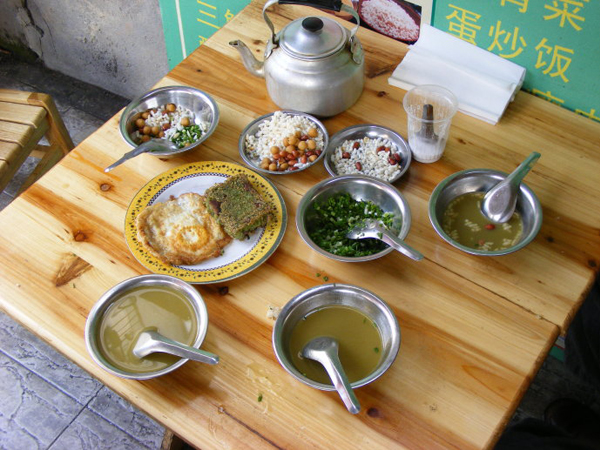 Making Process: Gongcheng oil tea’s production method is particular. The tea leaves should be picked up on Qingming and Grain Rain. Firstly, soak 5 to 10 minutes with a little boiling water, in order to reduce the odor and bitter taste, and then put a little lard in the tea pot, put into the ginger, garlic and soaked tea, slightly fry, then hammer it,, add water, boil and add salt, respectively, with a bamboo tea filter into the funnel bowl, throw into the green onion, parsley end, with parched rice, crisp fruit (like fried dough), crisp peanut. Gongcheng oil tea, on the tables, you will smell a scent of green onion and parsley. 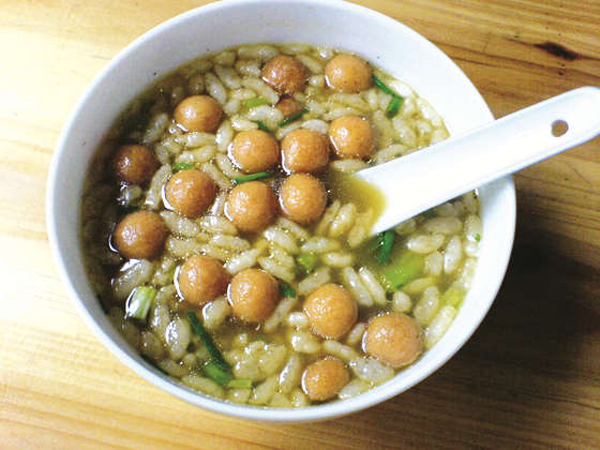 After drinking over a pot of oil tea, you can add clean water to the pot and boil, repeating boiled for five to six pots. One by one pot, you will feel the taste has no longer previous strong. In recent years, as more people travel to Gongcheng, good reputation spread far and wide. On the basis of the traditional tea, Gongcheng people developed a concentrated tea, brown powder, similar to jelly packaging.

The above mentioned food is the most famous snacks in Guilin. You must try them while you are travelling in Guilin. You will not regret trying them. And there are a lot more food for you to explore in this small town.