With the best taro that picked up in Lipu County (104 km south of Guilin), Lipu Taro Looped Meat is a famous traditional dish of Guilin. It is always served in a traditional Guilin banquet during the festivals and normal occasions such as weddings.
Lipu Taro Looped Meat is the Han nationality traditional dish in Guangxi Lipu and areas of north Guangxi. The meat is delicate, soft and fragrant, after cooking it is filled with special flavor and nutrition, which containing protein, starch and some inorganic salt, vitamin and has the effect of tonifying. It is the great raw material for making snacks and delicacies. Made by Lipu taro and streaky pork, Lipu Taro Looped Meat has become an every year holiday family feast dish or weddings dish, etc 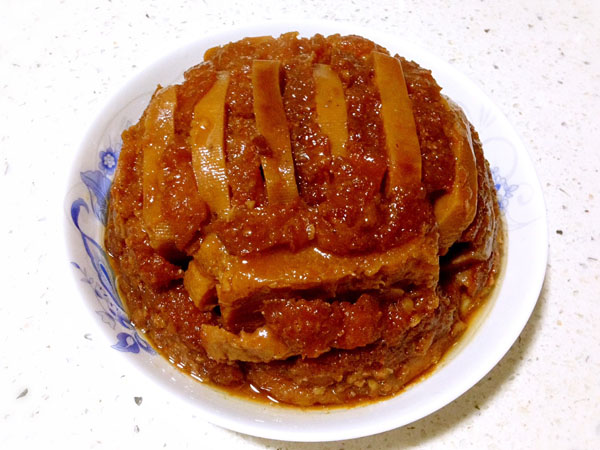 Lipu Taro Looped Meat is a delicious and famous Han nationality dish. This food is golden in color, taro slice and meat slice is soft and refreshing, oil and not greasy. Guilin characteristics dish is using authentic Guilin Lipu taro, pork belly and fermented bean curd as main materials, cooking with steamed vegetables, which has two taste of salty and sweet taste. And it deep fries streaky pork belly and Lipu taro to yellow color, then put the pork belly skin side down, with taro looped and steam in the bowl, after it cooked, turn over the dish into another plate.

Taro is also called the yam, there was a record in Shiji (the Historical Records). Legend has that Lipu taro was introduced from Fujian, every taro was big and in good quality, which was named the king of Taro. It has become a famous specialty in Guangxi in the Qing dynasty. In Qing dynasty Jiaqing period, North of Guangxi chefs took Lipu taro to make the Lipu Taro Looped Meat and became essential features dishes in the marriage and festival tables of residents of north Guangxi.

A brief introduction
Why Lipu Taro Looped Meat is so popular among this area? The successful point lies in the materials and seasoning of this dish.
Besides the selected taro and streaky pork, various materials are put together for cooking out an alluring cuisine. The ingredients include red pepper, garlic, Guilin fermented bean curd, wine, honey etc..

Cooking way
Here is a brief introduction to tell you how to cook this Guilin special food.
Firstly, the taro should be deep-fried in vegetable oil. Be sure that the taro turns into golden one.
And then, put all the ingredients which have been mentioned above into a pot with the taro and pork. We recommend using pressure cooker because it can ensure that the taste of every material and seasoning can mix together harmoniously.
Wait until the pork become soft enough, at that time, a Lipu Taro Looped Meat is served.
Value of this dish
In addition, this dish has certain health benefits, such as eliminating heat and purging fire, as well as softening the complexion.