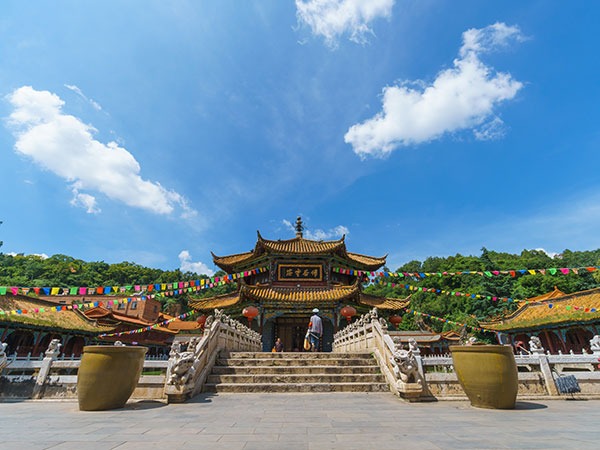 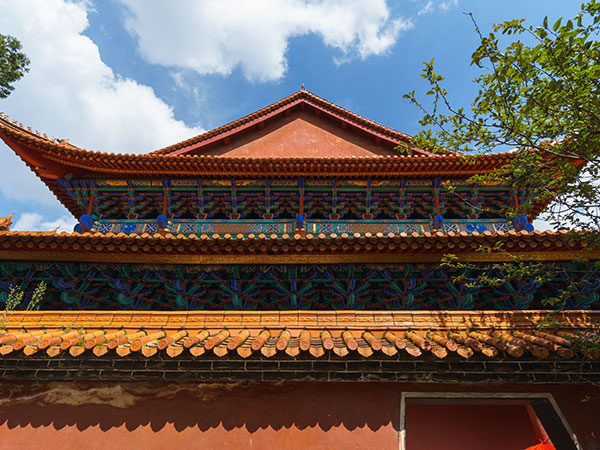 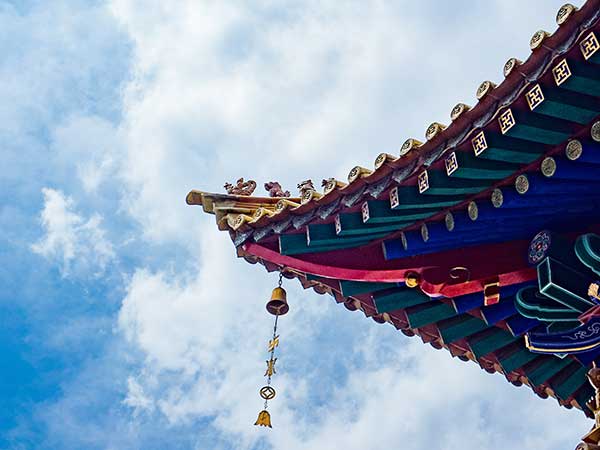 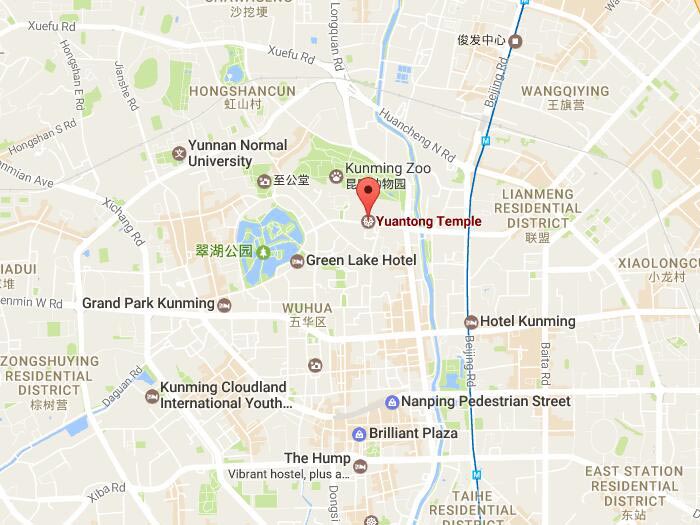 
Yuantong Temple (Chinese Name: 圆通寺) is the largest and most active temple in Kunming with a history of more than 1,200 years. Located on the south side of Yuantong Hill, it is a destination of pilgrimage for pilgrims worldwide. In 1956, the temple held a tooth of the Buddha here for a short time.

The ceremonies that held at the tooth relic where received and sent off were important events in the history of Yuantong Temple. The architecture of the temple buildings is rather typical, but the halls of the temple are visited in order on a declining slope, not on an ascending slope as is typical in Chinese Buddhist temples. In the temple are numerous scenic spots, and a pool reserved for setting captive fish free! (Fangshengchi). Yuantong Temple is one of the most important sites in the region for Buddhist ceremonies.

On the 1st and 15th of each lunar month, people gather here to take part in all kinds of Buddhist services. There is also a good vegetarian restaurant on the premises serving lunch and dinner.

Yuantong temple sites have tall spectacular Yuantong Shengjingfang, Yuantong Palace, Octagonal Pavilion and at present the only one Theravada Buddhism of the China mainland—copper buddist hall. The copper Buddha sitting statue inside the hall (3.5 meters high, weighing 4 tons) and Yuantong Palace Sakyamuni statue are in different shapes and show the differences between the two sect of Buddhism. Yuantong Temple looks magnificent, towering and the Buddha is solemn, pavilions are unique, trees are green, attracts generations of poets and painters left many praise verse here, and it has been one of the eight sights of Kunming. Now, after reparation, it shows more its elegant appearance, like a beautiful garden in regions south of the Yangtze River.

Unlike other buddhist temple, after going into the gate is not uphill, but downhill along the central axis, and the Great Buddha’s Hall is located in the lowest place of Yuantong Temple. The temple is facing south, gorgeous. The whole temple is centered on Yuantong palace, there is a pool in front of it, on both sides of winding corridors are around the pool and connect the hall, forming the unique style of waterside pavilion temple and pond yard. Temple consecrate a Qing dynasty Guangxu period of delicate Triratna Buddha sitting statue, and in the center of the hall there are two columns as high as more than 10 meters, each has a dragon on it. Yuantong Temple is a masterpiece of Chinese buddhist temple.
Existing buddhist temple of Dianchi Lake area, the earliest and the oldest buddhist temple is Yuantong Temple at the foot of Yuantong hill. It is also the biggest buddhist temple in Kunming city, and it is the location of the Buddhist association in Kunming, Yunnan province.

Tang dynasty Yongtai period first year (765), Nanzhao (a local regime in ancient China) built Tuodong city in the north shore of Dianchi Lake, at the same time, also built a batch of buddhist temples with characteristic of Nanzhao. The Potalaka Temple built in Tadong east northern suburb of Luofeng Mountain and cliff is one of that batch of temples, and Potalaka Temple is the Yuantong Temple predecessor.
Potalaka is Sanskrit, also have translation as "potala", or "putuo", which means "the light mountain with a small white flower", is the Avalokitesvara sanctum. "Yuantong" is one name of the 32 names and alias of Avalokitesvara, Avalokitesvara also known as "Yuantong". So, whether it is "Potalaka", or "Yuantong", it is temple to consecrate Avalokitesvara.
Buddhism called the goddess of mercy (Avalokitesvara) as mercy of the bodhisattva, there are many incarnations, all living creatures who suffer just recite his name, the goddess of mercy "hear the sounds", immediately leave for rescue. So it is supported with believers. Goddess of mercy with the Tibetan tantric Buddhism was introduced into Yunnan, located at the edge of the Erhai Lake at first, and became one of the main idols of tantric Buddhism in Yunnan. Nanzhao nobilities regarded Tuodong city as "east capital" and at the beginning of founding, they built Guanyin Temple Potalaka Temple. This Potalaka Temple is one of the earliest Buddhist temples in China, 100 years earlier than the Zhejiang Mount Putuo of four famous Buddhist mountains.

Potalaka Temple existed for 400 years, was destroyed at the beginning of Yuan dynasty due to the war and the temple ruined. From Yuan dynasty Dade period fifth year (1301) to Yanyou period sixth year (1319), people of Yuan dynasty spent 18 years to rebuild a larger temple in the ruin of Potalaka Temple, and was renamed Yuantong Temple. In Ming dynasty, Yuantong Temple is surrounded in the city, and got special care from the supreme ruler of Yunnan Mu family. Yuantong Temple is the main place for Buddhist ceremony of Mu family, Mu was also became a big benefactor Yuantong Temple. Mu family donated and raised to repair and expand for many times, Yuantong Temple entered the heyday, became the largest Buddhist temple in Kunming city. In Qing dynasty Kangxi period eighth year (in 1669), when Wu Sangui ruled the Yunnan he made a major repair, the gate moved south to the opposite of Yuantong street, and he set the "Yuantong Scenic Spot" memorial archway and octagonal pavilion, laid the basic pattern of Yuantong Temple today.
During Tongzhi period tenth year (in 1871), the temple had been submerged, Buddha was damaged. Guangxu period the Buddha was rebuilt, and the temple consecrated Sakyamuni Trikāyāh, however, the temple was not routinely changed into "the great buddha’s hall", still retained the name of "Yuantong treasure house". As a result, the Guanyin hall here consecrated to tathagata. Yuantong temple was the Avalokiteshvara sanctum, and it can not do without the Avalokiteshvara in Guanyin temple, so the Avalokiteshvara put into the Octagonal Pavilion in the front of the hall.

How to Get to Yuantong Temple

Taking public bus No.4 and 59 in the city to Yuantong Temple directly