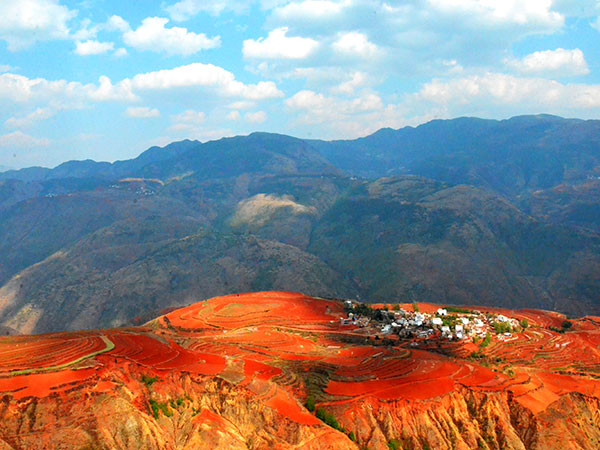 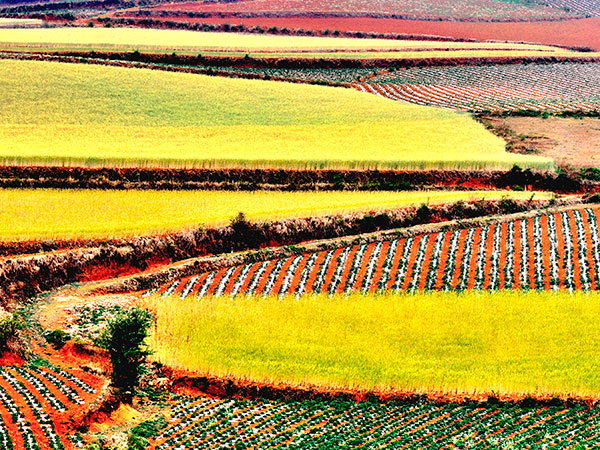 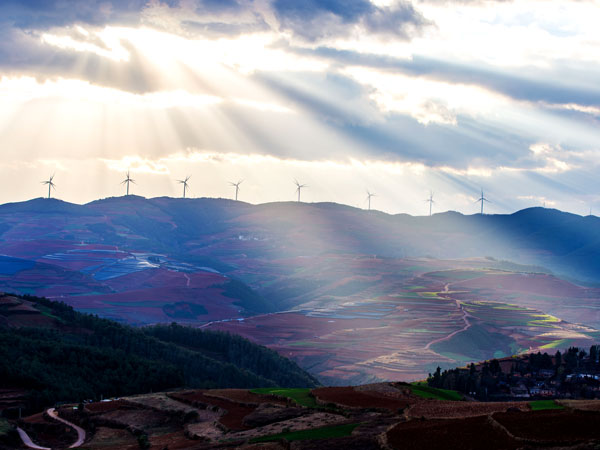 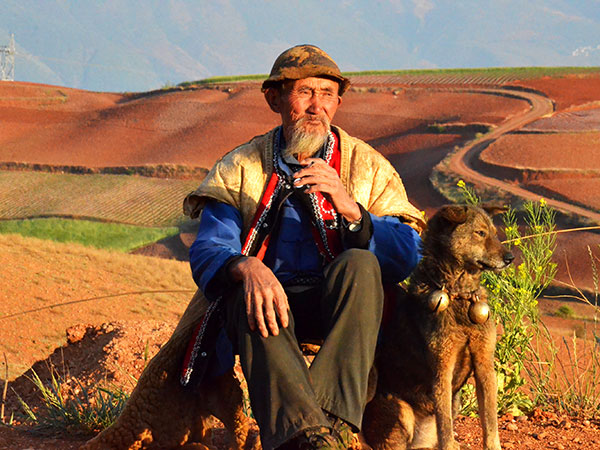 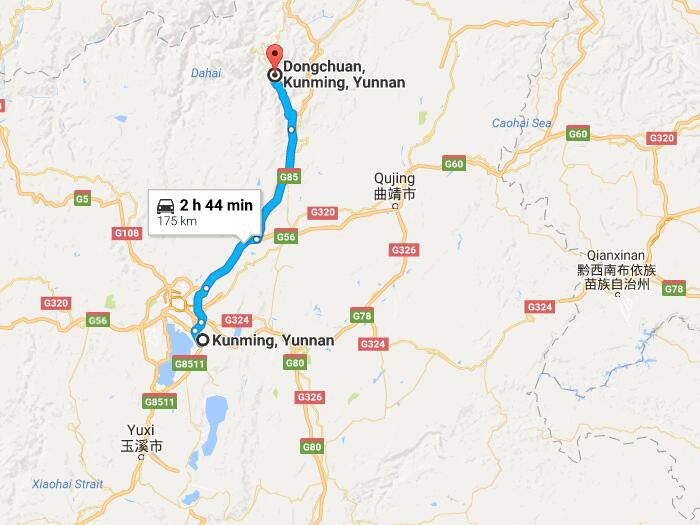 Noted as a left palette by God; The paradise for photography


Dongchuan Red Soil (Chinese Name: 东川红土地) is located in the northeast side with more than 200 km away from Kunming City. The red soil developed under the high temperature and rainy conditions in Dongchuan, Yunnan , is rich in iron and aluminum, with little organic matter, strong acidity and heavy clay. This area boasts the most typical and featured red soil in Yunnan highland. Experts regard it as the second marvelous red land in the world following the one in Rio Brazil.

Although discovered in the mid-1990s, the exact location is kept secret among few Chinese photographers who scooped award-winning photos here. People who have been the first time to visit this land will be deeply impressive by the gorgeous scenes. Lands in deep red, purple, bright red, etc… cover thousands of mountains. When wind blows, the plants in fields wave tenderly. It is a colorful picture drew by the nature. Viewing it from away, it looks like an oil painting more than a Chinese painting.
Photo genetic, breathtaking, wonderful are not big words to describe this land. Those strong colors of red, white, yellow, green, gold, and blue, remind people of Van Gough’s oil paintings. The real Van Goughs are the local peasants, who are the painters and artists of this natural picture. They plough, they grow, they harvest, but meanwhile, not on purpose, that they created the most beautiful land oil painting in the world. Dongchuan Red Soil is becoming one of the most beloved paradise by the photographers and fans of the world.

Red soil is a kind of low yield barren soil, mainly because of human and natural weather factors accelerated "red soil desertification". Due to much people and less land, excessive development, deforestation, combined with the characteristics of the soil itself, the soil productivity of red soil area reduced and soil erosion is serious. Severe degradation happens in many regions, forming the "red desertification". Steep slope land reclamation or excessive reclamation, or destroying forest for reclamation, destruction of surface vegetation leads to soil erosion and land degradation. In addition, in the southern mountain area hills, soil erosion is serious and the harm is greater than the loess plateau that the rocky exposed can not be recovered and forms a "red desert".

Dongchuan Red Soil is located in the Hongtudi (Red Land) town, more than 40 kilometers southwest of Dongchuan District, Kunming City, in a place called "flower stone" (in 109 km milestone) where is considered by experts as the most majestic momentum of red soil in the world in addition to Rio de Janeiro, Brazil, and the picture even more magnificent than Brazil red soil.

When you take a broad view and look around, mountain and champaign presents different red of dark red, purplish red and brick red in the hundreds of large and small hills, rape flowers and potato flowers are blooming warmly, golden rolling wheat field moves like sea wave rolls under the cool wind, a layer of green, a layer of white, a layer of red and a layer of gold.

The most suitable time for Dongchuan Red Soil photography is during May to June and September to December, different season can see different scenery. Potato flowers are blooming in the summer, meanwhile wheat mature, part of the red soil lay fallow in autumn, another part of the red soil has planted green barley or wheat, and at that time Yunnan own white rape flower has been in full bloom, more colorful. According to the locals, on the third day after the rain is the most beautiful time, the land is sodden and become more colorful under the sun. Clouds clear after the rain, the sun is shining, the sky is bluer, and the clouds change in different position, the sunlight and shadow in the field changes from time to time, every second is a new picture. If you are in luck, you can see a rainbow is connected to the red soil as an organic whole.
Walking on the soft wet red earth, standing out and overlooking, the field of red soil under the rain is as thick as oil color, bright shining brilliantly. Red is stronger, green is more gorgeous, yellow is exceptionally bright, and white is a piece of pure white...Farmers in the field work, what they do is like art, no, it is in creating art. To see the colorful color lump in their hands formed gradually and slowly changed, how wonderful it is! At that time the only thing to do is to use your camera.
If you want to feel the true red, you must follow the farmer's footprint. They are the creator of the red land, is the real master of this land, here is also the most vivid and natural scenery between the heaven and earth. Under the blue sky, red soil, the family works with the cattle, what they left behind is a row and a line of loose soil. Children are also in the field, and they follow adults to do what they can. That unadorned faces with curious eyes and every simple and honest smile is the most beautiful. But, before you press the shutter, you have better to ask them first, later, also have better prepare some change, since you ask for their things, also should give some rewards back. 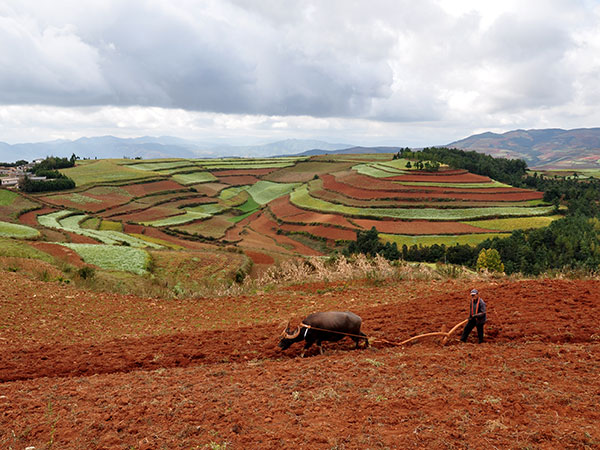 • Photography Tips
If you are not self-driving, then in the scenic spot you need to rent car to take pictures. You can ask for help in the hotel you stay in.
From Dongchuan, the attractions passing by in order are: Shuipingzi Rice Terrance (the most famous is called Moon Rice Terrace)—Luoxiagou (sunset ditch) in Songmaopeng—Huagou Thousand years of Nagarjuna—Red Soil Grand Sight—“T”crossing road
From “T” crossing road to right is Qicai Slope (colorful slope)—Jinxiuyuan—Damakan
From “T” crossing road to left is Yuepuao—Luoshi Bay and Tile-roofed House
Notice: Each scenery has its own characters, especially in different time the scenery is different. Suggest shooting enthusiasts try to stay two nights because the weather is changing that you will make a lot of classic images. During the sunrise people can go to Damakan to appreciate the beautiful sunrise scenery and other time to visit Qicai Slope, Jinxiuyuan, Yuepuao, and Nagarjuna , in the evening people can go to Luoxiagou to take pictures of setting sun.

Features: Photography, natural scenery
• How to get there:
► Route 1: Kunming-Huagou
Kunming North Bus Station: Fazhe-bound buses departing at 8:50 & 8:30 daily pass by Huashitou Village. Just try to let the driver know that you want to get off at Huagou. Bear in mind that the bus moves on extremely slowly and it takes 5~6 hours to arrive, as there are a few chaotic local markets along the road.
► Route 2: Kunming-Dongchuan-Huagou
Kunming Eastern Bus Station(Dongjv Bus Station): frequent buses run to Dongchuan County from 6:30am to 10pm / 3.5hrs; There are only 2 buses from Dongchuan County to Red Soil at 8:30 & 12:50, 1.5hrs. Charter a van if you missed the scheduled buses.
► Route 3:Kunming-Huagou
Chartering a vehicle from Kunming to Huagou costs.
• Accommodation
There are lots of guesthouses in Dongchuan. Most of them are ran by locals and located around the bus stations.

• Shower
Most of the hotels in there used solar energy, if there are too many tourists then it might be lack of hot water, so people who want to take shower should pay attention to the hot water.
• Weather
The weather changes a little in Kunming all year around. Because the scenic spot is in the mountain, so the temperature is 4 to 8 degree lower than Dongchuan under the mountain. And many places have strong wind and the temperature difference is large between day and night, except July to October to bring long sleeves wind coat, in other seasons tourists have better to bring thick clothing to prevent cold. Red Soil belongs to the Yunnan-Guizhou Plateau, the ultraviolet ray is strong so tourists should pay attention to sun block during day time.

The best time to have a photography tour is between the middle May and the early June, the middle October and November. Otherwise, Dongchuan in snow weather will show a different style, but roads may be blocked due to the frozen days.
Best Tours Recommended to you