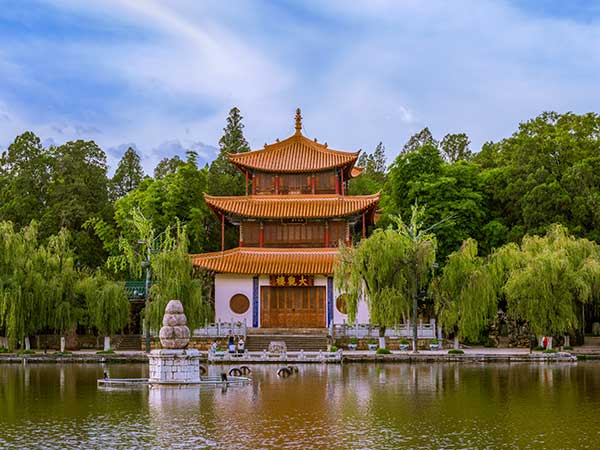 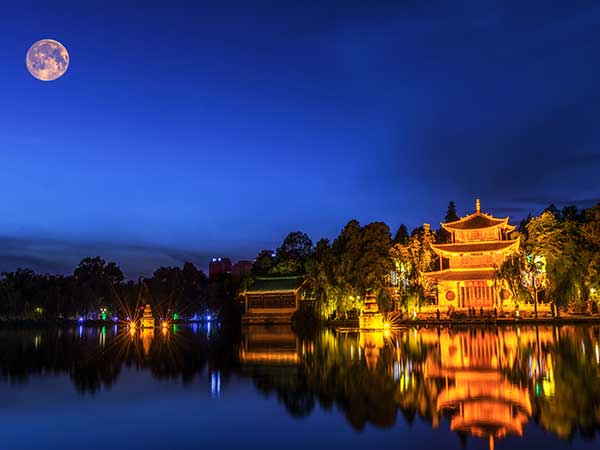 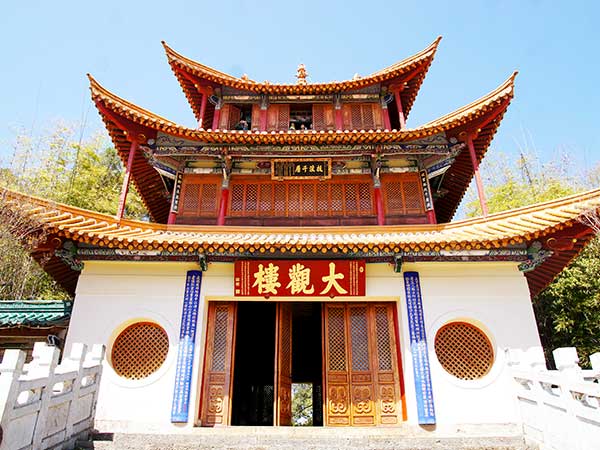 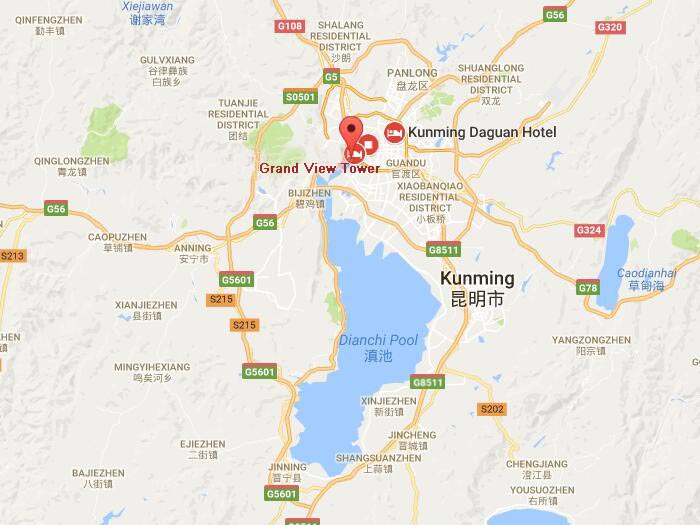 A famous ancient building in Kunming; ideal site to have a overlooking of the Dianchi Lake


Grand View Tower (Daguan Lou) (Chinese Name: 大观楼) is the most fitting name for the park and the tower situated at the terminus of Daguan Road in southwest Kunming City. Grand View Tower sits on the shore of Dianchi Lake and faces the Western Hill across the Dianchi Lake.

In 1682 a monk named Qianyin built a small temple here to teach Buddhist dharma; eight years later, that's in 1690, the official of Yunnan Province, Wang Jiwen, was so attracted by the beautiful natural views here, began to construct a whole park including halls, pavilions, bonsais, rockeries, trees and terraces. Grand View Tower has been an attraction ever since with the most visited spot being Daguan Park.

Like many other ancient Chinese buildings, the Daguan Park has also been, destroyed and restored several times because of dynastic changes and civil wars. The present-day's square and three-storied tower was built in 1883. The antithetical couplet displayed at the entrance is the longest one in China, which was written by a famous Qing Dynasty scholar named Sun Ranweng (also called Sun Ran). The couplet of 180 characters is one of the most valued cultural treasures in Yunnan Province.

The first part of the couplet describes the beautiful and magnificent natural views before you, and urge people to enjoy and treasure this special part of China. The second part of the couplet reviews the 2,000 years history of Yunnan and remind that no matter how successful or frustrated you are, all will be in nothingness in the end.

【East Garden】
East garden is located in the east side of Jinhuapu, consist of "Qiushang and cypress garden" two private garden, east and south facing Grand View River going into Dianchi lake Caohai channel. Inside the garden pond there is interweaved lotus, surrounded by willow embankment, bridge across the creek, pavilion and corridor is near the lake, deep and serene scenery.

【South Garden】
In the southeast of Building Beyond Building, it is separated by Dianchi Lake channel. Garden pond streams are around willow embankment, zigzag bridge arch bridge, the small pavilion arbor, the south garden main building is a two-storey building match well of Chinese and western style "Jinhou Building". There is equipped with guest room, dining, conference reception and other service facilities.

【Miniascape Garden】
Grand View Park miniascape garden covers an area of 4500 square meters, is one of the largest miniascape garden in Kunming area. In the garden the trees are luxuriantly green, flowers are bright-colored, landscape set each other off, pavilion corridor is splendor, all kinds of bonsai scattered all over like stars in the sky. Besides the winding white wall, in front of the pavilion corridor are filled with trees, match with rock bonsai. Beautiful old trees are in sight: towering stands, each tree has its own form and each is graceful in its own way. The garden has a lot of the old pile with more than one hundred year of history. A crape myrtle planted during Qing dynasty Qianlong period, so far, more than two hundred years old, it is said that the early 60s, a Chinese-American paid $30000 to buy but failed, now it has become a miniascape garden treasure.

【Jinhuapu】
Jinhuapu is bounded by water on three sides and it is the main scenic area of Grand View Pavilion Park. Park entrance is facing Jinhuapu double-hipped roof arch gate. The north and east is a large lotus pond. "Grand View Pavilion" is the main building of Jinhuapu, pavilion, hall and other ancient architectural complexes constructed in Qing dynasty Kangxi period, and connected by the corridor, the past two years there are new cultural attractions like "Huaxia Long Couplet Corridor", "the Grand View Pavilion inscription rubbings exhibition", "long couplet history cultural center" and other cultural attractions. Here gather together the history humanities landscape of the Grand View Pavilion and it is also the main exhibition area of flowers exhibitions during the spring and autumn.

【West Garden】
West Park is located in the west side of Jinpuhua, which is new long couplet culture park of 200 mu of land requisition in 1998. There are 30 acres water area, willow embankment arch bridge, green grass, waterside pavilion and stone path, waterside pavilion.

How to Get to Grand View Tower