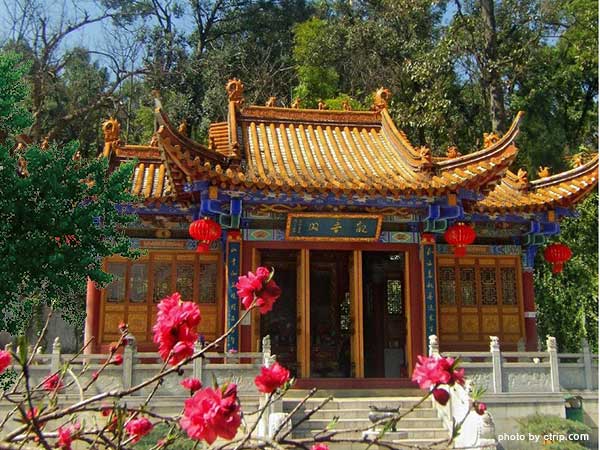 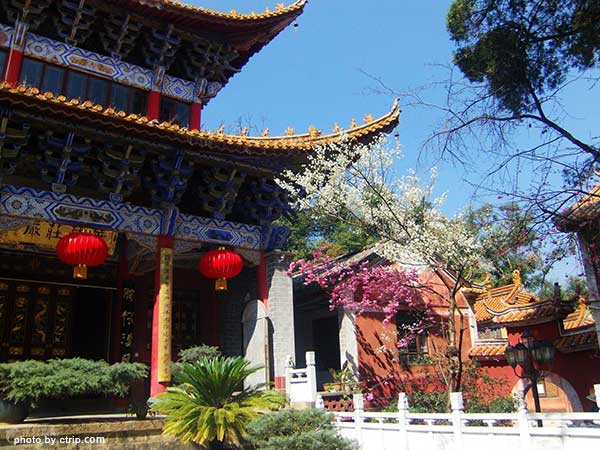 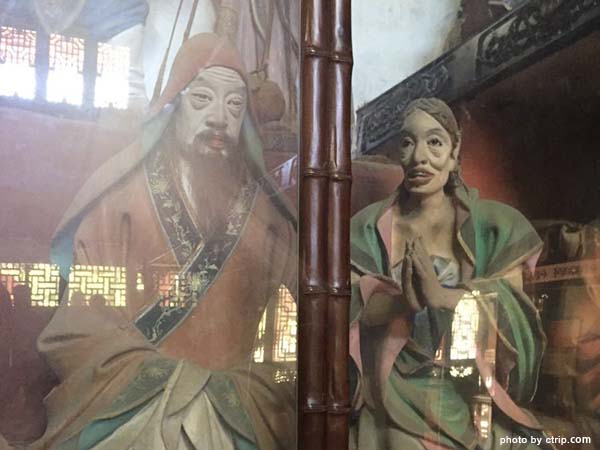 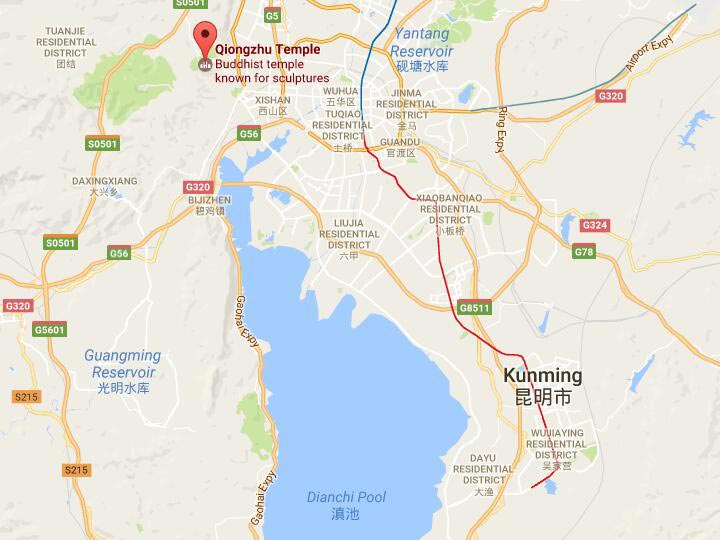 A famous Buddhist temple in Kunming


As a famous Buddhist temple in Yunnan, Qiongzhu Temple (Bamboo Temple) (Chinese Name: 邛竹寺) is situated on Mt. Yu'an to the northwest of Kunming. The name of the temple (Qiongzhu) refers to a type of bamboo (genus Qiongzhuea).

The Bamboo Temple was established during in the Yuan Dynasty as the first temple dedicated to Zen Buddism in Yunnan. It has since been burned down and reconstructed several times. The present structure mostly dates from the late Qing Dynasty.

These life-sized clay figures are stunning - either very realistic or very surrealistic. Down one huge wall come the incredible surfing Buddhas, some 70 odd, riding the waves on a variety of mounts - blue dogs, giant crabs shrimp, turtles, unicorns. One gentleman has meter long eyebrows; another has an arm that shoots clear across the hall to the ceiling.

Qiongzhu Temple was built in the Tang and Song dynasty. At the beginning of establishment of the Qiongzhu Temple, it was not famous. To the early Yuan dynasty there was eminent monk delivered the sermon here so the temple was known gradually.
Ming dynasty Yongle period seventeenth year (1419), Qiongzhu Temple was destroyed by fire. The twentieth year of Yongle period (1422), Musheng and Mu’ang organized to rebuild Qiongzhu Temple, and completed in Ming dynasty Xuande period third year (1428), which took six years in all, and it was temple complex bigger than in Yuan dynasty.
Ming dynasty Wanli period eighteenth year (1620), "Record of Yu’an Mountain Qiongzhu Temple Consecrate the Tripitaka" recorded that Gaoben in Kunming gave Jinling block-printed edition tripitaka of 667 sets 6714 rolls to the temple and collected in the temple.

First year of the reign of emperor Kangxi of Qing dynasty (1662), Qiongzhu Temple was rebuilt, and provincial education commissioner Li Guangzuo compiled “Rebuild the Yu’an Mountain Qiongzhu Temple”. The twenty-third year of the reign of emperor Kangxi (1684), governor-general of Yunnan and Guizhou province Cai Yurong rebuilt the Qiongzhu Temple again.
Ninth year of Guangxu period (1883) to Guangxu sixteenth year (1890) of Qing dynasty, Qiongzhu Temple abbot Mengfuo monk invited Sichuan “Changlong group” “Shudong group” ancient architecture maintenance craftsmen to rebuild the temple gate, Tianwang Hall, Daxiong Hall, Yanhua Pavilion, two wing-rooms at the sides of or facing the principal rooms, kithchen, bathroom, storeroom, and open granary. North and south walls of Daxiong Hall, Tiantailai Pavilion and Sanskrit Pavilion was rebuilt by clay sculpture artists Li Guangsheng invited from Hechuan County Sichuan, and he remodeled five hundred arhats with his apprentices.
In 1983, Qiongzhu Temple was identified as Chinese regional national key temples of Buddhism in Han nationality region by the State Council.
In April of 1984, Yanhua Pavilion was destroyed by fire accident. To restore the historical cultural relics, in October 1989, with the support of the government and the followers, Yanhua Pavilion collected money for reconstruction.
In 1985, Qiongzhu Temple was turn to the Buddhist circle for management.
December 25 to 26, 1990, Qiongzhu Temple grandly held abbot ceremony, Elder Mingdao became the abbot of Qiongzhu Temple and this was the first abbot ceremony in Kunming since the founding of new China.
Since 1992, Qiongzhu Temple started project of repairing the hall, after two years of time, restored the architectural style of double-hipped roof arches of the Ming and Qing dynasties.
On October 12, 1994, Yunnan Kunming Qiongzhu Temple held a grand celebration of the finish of reconstruction and the Buddha consecration.
On June 25, 2001, Qiongzhu Temple as ancient buildings in the Qing dynasty was identified as one of national key cultural relic’s protection units by the state council.

Qiongzhu Temple built around the mountain due to terrain. And its layout sits west to east, forming the type of four into the three courtyards. Now Qiongzhu Temple has three courtyards, the buildings along the axial direction in the order are: Gate, the Great Buddha’s Hall and Yanhua Pavilion. The left and right wing at the Tianwang Hall is Tianlai Pavilion and Sanskrit Pavilion. The left and right wing of the Great Buddha’s Hall is Zushi Palace and Qielan Palace. The rest of temple is the guest room, abstinence room, the monk chamber, the abbot room, incense room, corridor etc.
【The Great Buddha’s Hall】
The Great Buddha’s Hall sits behind the gate, about 20 meters long, and 12 meters wide. When sculptor designed the series of carvings, they used combination of circle shape and collective march queue, each carving characters were showing their special prowess, speeding across the sky, riding a cheetah to go ahead, which creates a strong sense of dynamic. The whole arhat hall has a single carving and also the series of carvings; there is linear layout also a circular layout, various forms and interactive use made it colorful and the overall effect is perfect. And the carving character’s joys and sorrows, actions are as well as the world.
【Huayan Pavilion】
Pass through the Great Buddha’s Hall is Huayan Pavilion. Huayan Pavilion is about 20 meters long, 10 meters wide, and it is the only well-preserved Qing dynasty Dougong building (a system of brackets inserted between the top of a column and a cross beam) in Kunming. There are couplets written by scholars Qian Nantu in Qing dynasty and murals drawn by Li Guangxiu, unfortunately destroyed by fire accident in April 1984.In October 1989, under the support of local government and believers, Qiongzhu Temple was reconstructed by fund-raising and held a grand ceremony of Huayan Pavilion consecration. New Huayan Pavilion maintains the original style and features, the and uses reinforced concrete instead of wood double-hipped roof arches, glazed tile, carved wooden doors and windows and so on are in the style of ancient building. The pavilion is in two parts, with a total area of more than 400 square meters. In the middle of lower floor there is consecrating white marble of the "Three Saints of Hua-yen", the upper floor consecrated the Burmese jade carving Shakyamuni Buddha, about 2 meters high. And in the middle of Huayan Pavilion was hanging a large horizontal inscribed board written “Huayan Pavilion” from Mr. Zhao Puchu.

How to Get to Qiongzhu Temple