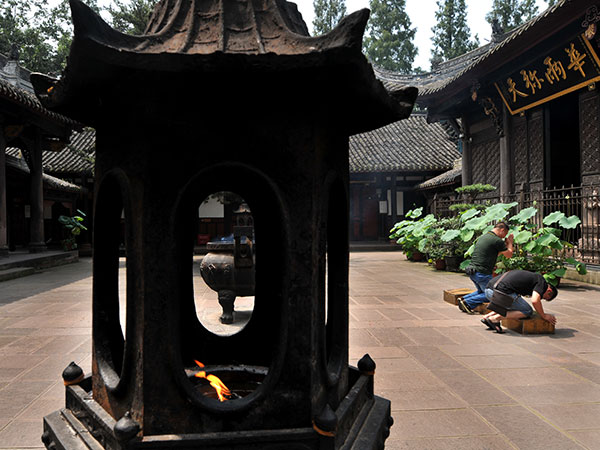 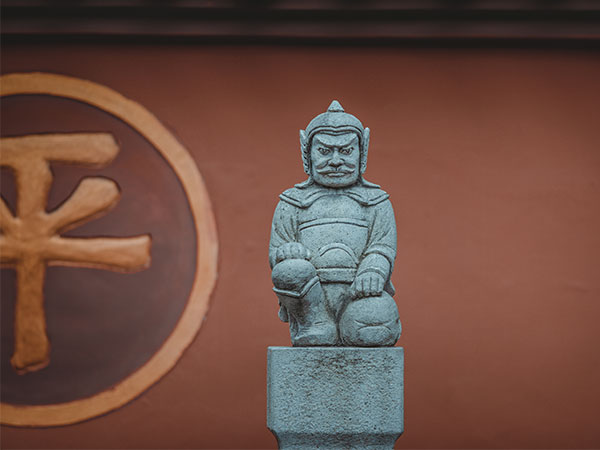 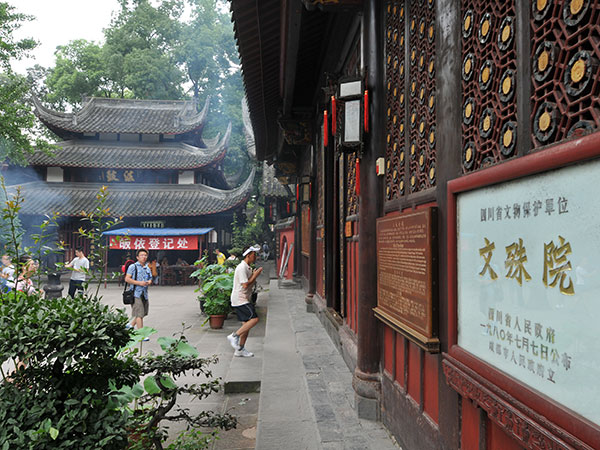 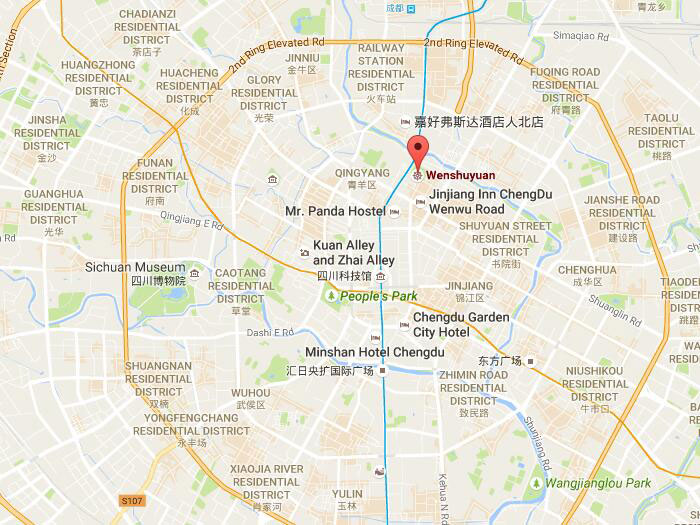 
Wenshu Temple is located in Chengdu downtown, covering an area of 90 mus. It is a famous Buddhist temple and the provincial cultural relics protection unit in Sichuan. It is also one of the four Chinese zen Buddhism Sadhana Spots in China.
It used to be Miaoyuanta Courtyard. In Song Dynasty it was renamed "Xinxiang Temple". Later it was destroyed in the war. It was said that, during Qing Dynasty, someone saw red light appearing in the night. The local government sent people to  Legend of the Qing Dynasty was Yomi red light appears, the government sent people to have a look and they saw the statue of Manjusri Bodhisattva was in the red light. Because of it, the temple was renovated in 1697 and finnaly named Wenshu Temple ( Manjusri Bodhisattva’s Chinese name).

Layout of the Wenshu Temple

Wenshu Temple is facing south, with the construction area of 11,600 square meters. It has over 190 rooms. Hall of Heavenly Kings, Three Deities Hall, Buddha Dharma Hall and Mahavira Hall and Sutra Mansion are solemn and respectful lining on the central axis of the temple, which are typical Qing Dynasty architecture. At both side of the temple, there are Zen Room, Guan Room, Guest Room, Vegetarian Room, Jie Room, the Buddha Recitation Hall and the Ministry Room, forming an enclosed courtyard.
In the two mutually opposing three eaves style bell towers, there is a bronze bell weighting 4500 kg. The bronze statue of Avalokitesvara is a masterpiece sculpture. And the statue of Guardian Deity Skanda, was built in the Qing dynasty. There is a Burma Hade Buddha which was invited from Burma in 1922.
In addition, there are over 300 buddhas’ statues, including stone buddha inscriptions, bronze or iron buddhas statues, or wooden statues, which all have artistic value.

What to See in Wenshu Temple

【Ancient Architectures】
Five Halls: there are five halls line upon the central axis which are: Hall of Heavenly Kings, Three Deities Hall, Mahavira Hall, Buddha Dharma Hall, Sutra Mansion. The five halls built on the 200 m long central axites, each hall is simple and unsophisticated with upturned eaves and is typical Qing Dynasty Style.
Around the Temple, Zen Room, Guan Room, Guest Room, Vegetarian Room, Jie Room, the Buddha Recitation Hall and the Ministry Room forms a enclosed courtyard.
【Buddhas’ Statues】
Dhammapala Weituo’s Statue, built by Benyuan Master in 1829, was standing at the side rooms of the Hall of Avalokitesvara Buddhisatva. The statue stands mighty with dignified appearance. The workmanship of the statue is so exquisite that it is a rare art treasure.
The Avalokitesvara Buddhisatva Statue was also built in 1892. It is a bronze statue. The Avalokitesvara Buddhisatva sit on a water beast peacefully. The statue is very lively and the design of the beast is unique and lovely. It reflects the high carving and casting level in Qing Dynasty.
The Burma Jade Buddha Statue was invited by Xinlin Master in 1992. He walked to Burma from Chengdu to invite the statue. It is also very precious.
【Buddhist Sutras】
There are thousands of sutras in Scriptorium of the temple including the the Pharmacist and Vajra Sutra which are given by Kangxi Emperor in Qing Dynasty.
【Painting and Calligraphy Treasures】
There are many paintings and calligraphy of Ming and Qing Dynasties. The most famous ones are the "Konglin” (Empty Forest )give by Kangxi Emperor in 1720 and “Haiyue” (Moon above the Sea) which was imitated by Kangxi Emperor.