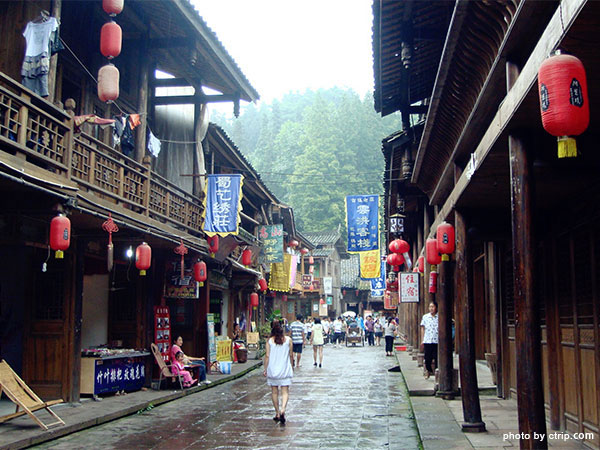 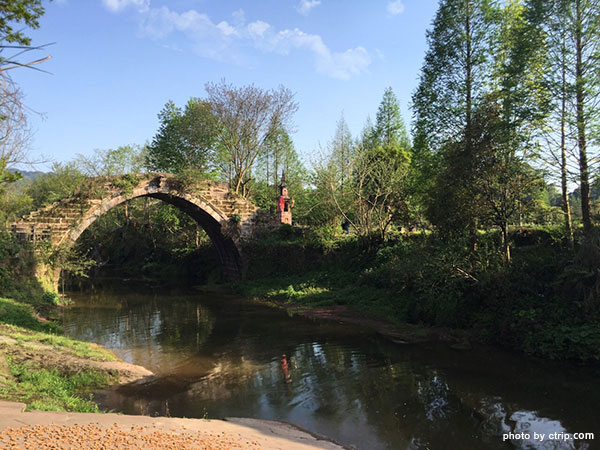 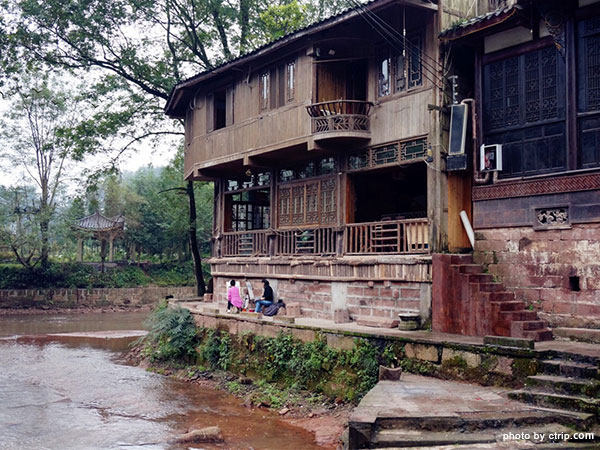 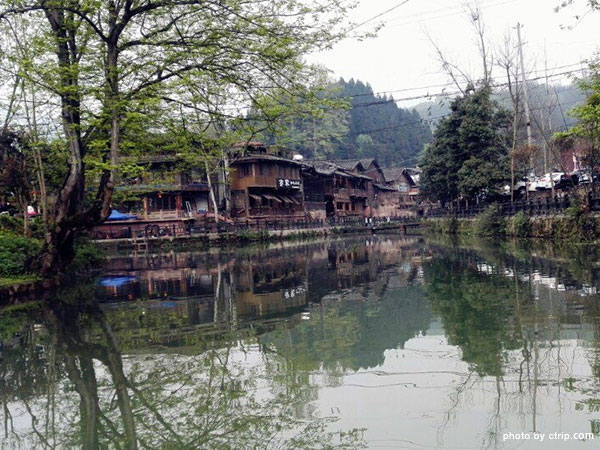 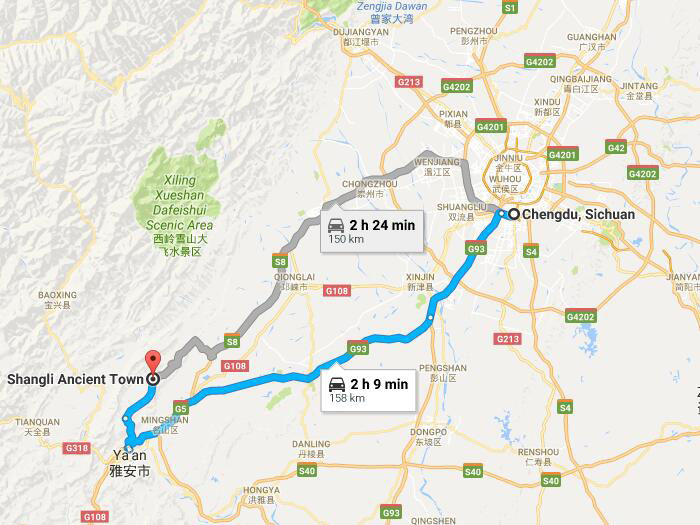 
Shangli Ancient Town is located in the north side of Yucheng District of Ya'an City in Sichuan. It locates on the boundary of four counties. It is the famous cultural ancient town as one of the top ten old towns in Sichuan Province.
Originally called "Luoshen", this town is the key station to connect Ya'an and Ancient Road of Southern Silk Road. The road is covered by stones, and the buildings are made of wood. Green roofs and white walls, wooden windows and sculptured doors, all of these form a picturesque town with the elaborate architectural art. Although the time makes the colors fade, the profound and unique ethnic culture is still expressed from the old buildings.

What to see – ancient town culture

【Ancient town】
Ancient town exists with two rivers around. Facing to the fields and hills, decorated with the bamboo grove, streams and bridges, the ancient architectures seam fantastic and quiet. When have a bird’s view of the town, you will find a picture past from the ancient time. When you are in ti, you will find a feeling in the past time.
【Ancient bridge】
There are more than 10 ancient bridges along the river of ancient town. Each of them is in a style without any repetition. These bridges are not only the tie to connect the bank, but also the works to show the ancient artists’ skills.
【Ancient Pagoda】
The pagodas in Shangli can be divided into Wenfen Pagoda, Jianqiao Pagod, Yaowang Pagoda and Sheli Pagoda. They are the representative architectures of the economic, historic and cultural arts in Shangli.
【Ancient streams】

Baima stream and Peizhu stream are two unique scenic areas in Shangli. Baima stream, originally called Long Yuan, is a spring in a constant temperature all year around. Penquan stream is a live spring without dry forever.

Shangli connects Mingshan and Qionglai in the east, and connects Lushan, Ya’an in the west, is located in the transition of four counties, and is the important post of the Silk Road. The so-called southern Silk Road is one of the oldest international passageways in China that had appeared as early as two thousand years ago in the western Han dynasty. Its starting point is Sichuan, pass through Zhaotong, Qujing, Dali, Baoshan, Tengchong in Yunnan Province, leave from Dehong and enter into Myanmar, Thailand, finally reach India and the Middle East. Also known as "Shu-Hindu Road", it has total length of 200 kilometer. And as same as the northwest "Silk Road", "Southern Silk Road" had made a great contribution to the world civilization. Shangli Ancient Town was Soutern Silk Road in the ancient time, and also the important station from Ligong Ancient Road to Silk Road.

Shangli town has a long history, according to remained cultural relics record in the town, the ancient name "Luosheng" at the beginning is taken the name of the old path on the post that is one of the custom passes of Bashu plains to the ethnic area. In late Ming dynasty, because of the town's population continued to increase, booming economy, and people changed its name to “Wujiakou (five families)” based on the five famous families, namely: the Yang’s Official Hat (officials aristocratic family), Han’s Money (Han’s family was doing business), Chen’s millet (Chen’s family owned numerous grainfield), Xu’s girls (Xu’s family girls were beautiful), and Zhang’s Dingzi (Zhang’s family was kung fu master and sold medicine).
After the liberation, according to Longxi River flow, and rural area on the upstream is divided into Shangli Ancient Town. According to historical records, before Han dynasty, here was the manor of black cloth Qiang people, from Han dynasty to Sui dynasty here was under jurisdiction of Yandao County. During the ancient time, west Sichuan was called southwestern minority groups, and in order to develop this piece of land, from the pre-Qin dynasty to the Ming and Qing dynasty, there were several times the mass migration.
Shangli was ethnic accumulation area at the early time, and the minorities were mainly native Ba-shu ethnic group- black cloth Qiang people. Due to continuously prosperous of the southern Silk Road, there often were some foreigner to settle here who brought advanced culture of the central plains and foreign culture which became unified Han culture fused with local culture. Shangli Ancient Town is in northern Sichuan Ya’an city northern Yucheng District, and it is an important station in the history of the southern Silk Road, is also the place of that the red army long march passed through.

At the feast, the town's residents invited opera troupe to perform in their theatrical stage, which contains thought of "ten thousands of people happy together". With traditional folk customs, Ya'an Shangli town became a sea of joy at that time, Year Pig Festival ( the slaughtering of pig for celebrating the Spring Festival) tourism theme activities opened, the traditional farmhouse celebrated new year, slaughtered pigs, and watched drama.

【The best time to visit】
Shangli Ancient Town can be visited throughout the year, during spring and autumn is the best. The location of Shangli Ancient Town belongs to the famous rain city—Ya’an city, the climate characteristic is wet. Winter without cold, summer without heat, that the annual average temperature of year is 15 degrees, average temperature in January is 5 degrees, and average temperature in July is 23 degrees or so. Rain days frost-free period are 308 days, rainy days are 200 days or so. Autumn is likely to rain, summer for the shower. When tourists visit at that time should take rain gear.
【Accommodation】
Shangli Ancient Town accommodation has been mature, in the town there is a lot of guesthouses and inns, very distinctive. The most of the buildings are wooden structure with distinguishing feature. Accommodation condition is comparatively perfect, the environment is clean and the price is relatively affordable.

【Food】
Ya’an famous snacks: in the Middle Street food market, there is Cheng’s bean jelly and Wu’s Chaoshou. Cheng’s bean jelly sweet noodle, cold noodles, and spring rolls are recommended. In the evening, there are many places to eat, usually the food stall that sell barbecue and teppanyaki is concentrated at the entrance to Sichuan Agricultural University in Renmin road, Jiefang road and Yqanjiang West Road beer house; and Chuanchuan was concentrated hidden inside the lanes of Kangzang road, the price is very affordable.

How to get to Shangli Ancient Town

From Chengdu Xinnanmen Bus Station to take the coach to Ya’an for about 45 RMB, and then from Ya'an Tourism Bus Station take bus to Shangli for about 11 RMB, that you can arrive Shangli Ancient Town.