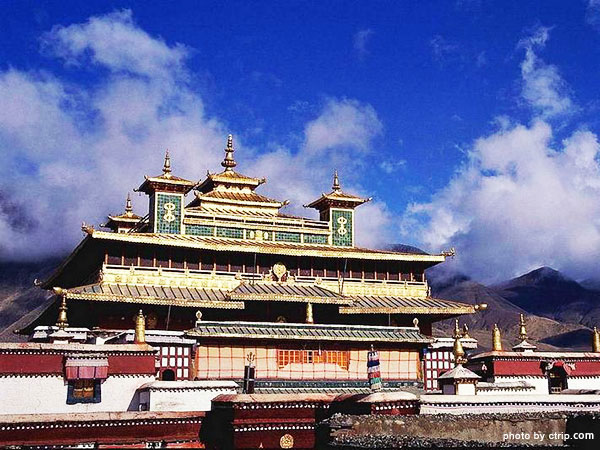 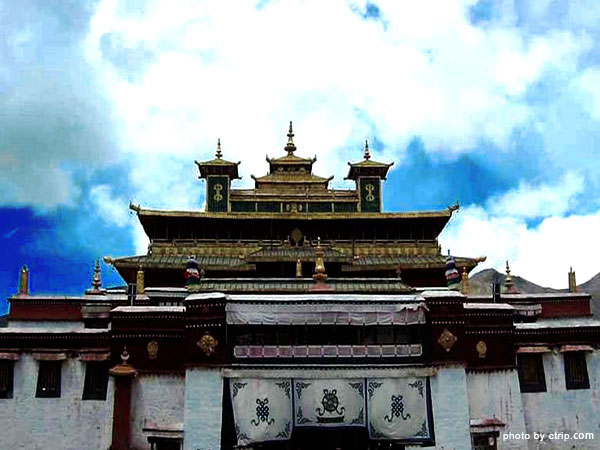 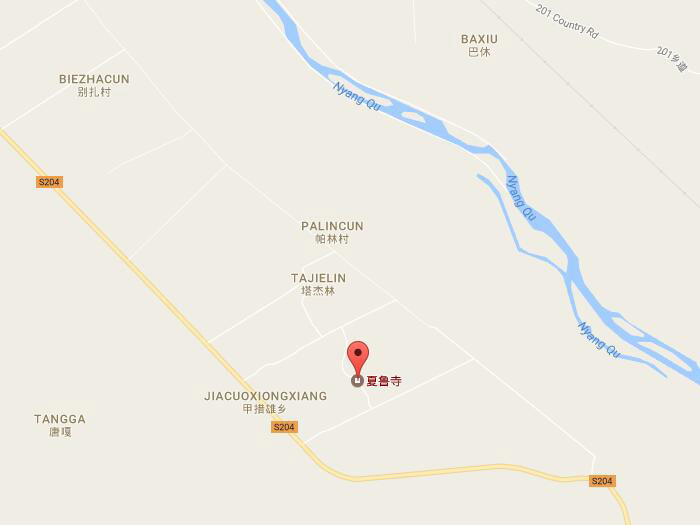 
Shalu Monastery or Schalu Kloster located 20 km southeast of Shigatse, is a perfect combination of Han and Tibet architectural styles. The portrait of Bodhisattva in the Shalu Monastery is quite different from those of other temples. The artistic style is a combination of Chinese inland and exotic Tibetan culture.

Shalu Monastery is one of large buddhist temple in Tibet, as well as the ancestral temple of Tibetan Buddhism Shalu sect.
In 998 (the first year of Xianping period in northern Song dynasty), Tibetan Buddhism entered the second propagation of Buddhism, 10 Tibet buddhists including Klu-mes tsul-khrimsshes-rab, after Buddhist prohibition by Langdrama, they formally acknowledge him as their master when they heard that big lama Gompa Tsenrou (about 891 ~ 975) fled from Tibet to Qinghai was a eminent monk.
In 1087 (the second year of Yuanyou period in Northern Song dynasty), one person that ten Tibet buddists, called Dorje Wangchuk studied successfully and returned to Tibet, and he built a temple named Jiankong in the southeast of Shigatse, received a disciple named Chetsun Sherab Jungnay. Chetsun went to India to study and became knowledgeable Buddhist master. In order to develop Buddhism, Jetsun wanted to build a temple and asked his teacher Dorje Wangchuk to select a place by shooting arrow. The arrow landed on crops field where green shoots of grains new bud just come out, "green crops" in Tibetan language means “Shalu”, so named Shalu Monastery. Buton Rinchen Drub (1290 ~ 1364) is the founder of Shalu sect (also called “Buton sect”), who was a knowledgeable scholar of Tibetan Buddhism Sakya sect.
In 1320 after Shalu Monastery rebuilt (the seventh year of Yanyou period of Yuan Dynasty), Buton catalogued all of the Buddhist texts at Shalu, some 4569 religious and philosophical works, and formatted them in a logical, coherent order. He also wrote the famous History of Buddhism in India and Tibet there, which many Tibetan scholars use in their study today.
In 1329 a devastating earthquake destroyed the Shalu Monastery. At that time Jetsun was in Beijing and the Mongol Emperor knew that the Shalu Monastery was demolished, he assigned Jetsun to return back and rebuilt the monastery. Therefore monastery was later rebuilt in 1333 by local lords under the command of Toghon Temür, last Khagan of the Mongol Empire. The new architectural framework of the monastery was dominated by Mongolian styles, with massive inward-sloping walls around a main courtyard and strong woodwork and glazed roof tiles from Qinghai.

Shalu Monastery is famous for its Tibetan style and combined with the architectural style of Han, it is Tibetan temple building with colored glaze tiles of the Han palace type on the roof, plus the wooden dougong (a system of brackets inserted between the top of a column and a crossbeam support), two different architectural styles are in good fusion, which fully shows the craftsmen of Tibetan ethnic and Han nationality close collaboration.
Shalu Monastery main building is a three-story buildings high Tsochen hall, including the main assembly hall, Circumanbulation corridors and more than ten temples. The hall is facing east towards a huge square, and the east, south and north of square, three sides surrounded by two-story buildings of monks living quarter and warehouse.
【The Assembly Hall】
Shalu Monastery Assembly Hall is divided into front and back hall and left and right side halls. The hall is a synthetic one on the bottom, above the second floor is four separated palaces. All is wooden frame glazed tile roof. This is a traditional Tibetan structure model with the combination of the mainland China form, which is the special style of the ancient building group.
The overall area of Assembly Hall is not large, but the elegant statues, rich murals content, delicate plastic arts are extremely rare. In the back of hall and turn left in the corridor, the upper part of  the wall was painted murals, corridor inner wall metope was painting thousand Buddha; The outer wall metope was Buddha stories and so on. There are a lot of life activities in the murals and the contents of the murals are extremely rich and lively with fine brushwork. On the frescoes style there are many places absorbed the art of Nepal or India's style of work, but there are also many pictures similar to Song and Yuan dynasty murals of Dunhuang Grottoes, and many pictures of clothing, accessories, furniture and building, etc., are also in China mainland style. This kind of style murals, generally is very rare in Tibetan temples.
【Shalu Lhakhang】
Shalu Monastery of the subject building is Shalu Hall, namely "Shalu Lhakhang". Its architecture is very special. This architecture is the crystallization of the Chinese architectural art combined with Tibetan ethnic architectural art. In addition, the monastery has four dratsangs, namely Cava dratsang, Rerbatse dratsang, and Anning dratsang. The conservation part is only the hall, the rest of dratsangs have been occupied by villages.
Shalu is facing west toward the east, two floors, the underlying is for the assembly hall, covering an area of 1500 square meter, enshrined for statue of Buddha and the eight disciples, and on both side is scripture hall, where enshrined Kangyur and Tengyur. The second floor of the hall is the Han type Siheyuan (quadrangle courtyard) layout with main hall, side hall and front hall, left and right sides is symmetrical. Four halls have colored glaze gable and hip roof and cornices, and a system of brackets inserted between the top of a column and a crossbeam under the eaves, which style of primitive simplicity and with diverse design. Main hall has the statue of Sakyamuni and Burton.
【Four Treasures of Shalu Monastery】
There are a large number of murals, Buddha, scriptures, thangka, ritual items, such as historical relics, among them, the four treasures are famous:
The first treasure is a sutra board, which is 700 years old. It was a square made up by 108 pieces of small boards during the foundation of monastery and cannot be reassembled once broken apart, a piece of sutra printed against the board is regarded as good luck. When believers pilgrimage to Shalu Monastery, they wish for the scrabble board printed scripture for bring good luck and ward off calamities.
The second treasure is “Holy Water Urn”: in the southeast corner, there is a brass urn with a diameter of 80 cm. It is usually covered with a piece of red cloth and sealed; the holy water may clean 108 filths and is changed every 12 years. When changing the water, the original pure water is neither adding nor subtracting, people who get the holy water will have good fortune a lifetime.
The third treasure is a stone basin, which was said the washbasin of the builder Chetsun Sherab Jungnay dating back to 1040. It displays in front of the hall. During rainy day, when the water gets all over the basin will not spill over, which is miraculous.
Fourth treasure is a stone tablet, which was unearthed when to lay the foundation, and when the stone was excavated, the stone was written a mantra which reads "om mani Padme Hum" and has four pagoda carved into it.

【Chinese Name】: 夏鲁寺
【Recommended Visiting Time】: 1 to 2 hours
【How to get to Shalu Monastery】: there are buses in Passenger Station in Shanghai Middle Road Shigatse to Shalu Monastery. If you charter a car, the round way can be at least 100 RMB, or you can take bus of Gyangtse direction and get off from the Shalu Monastery road sign, and then walk 3 to 4 km can reach there.