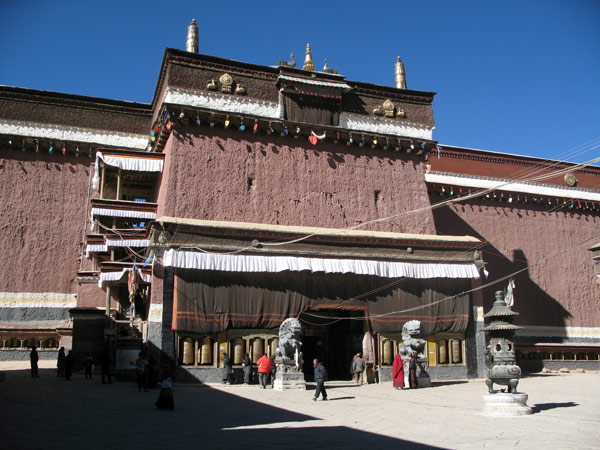 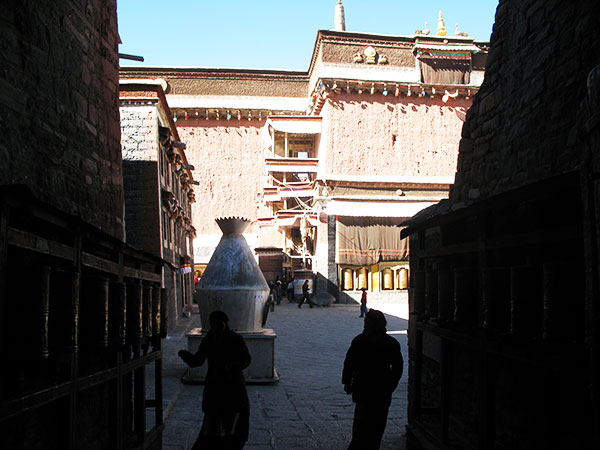 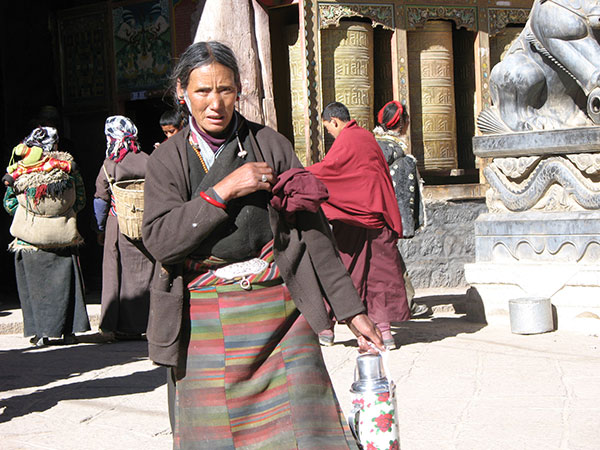 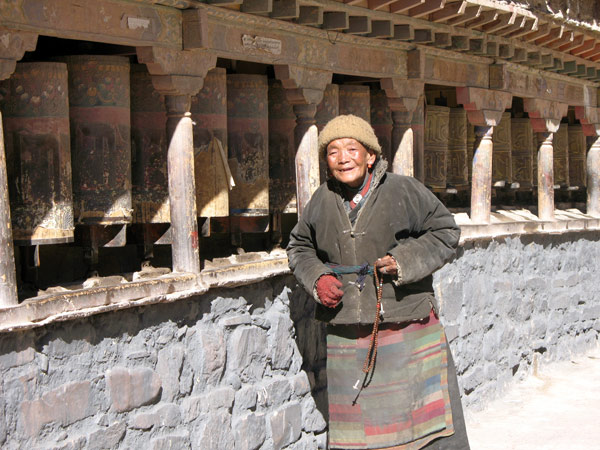 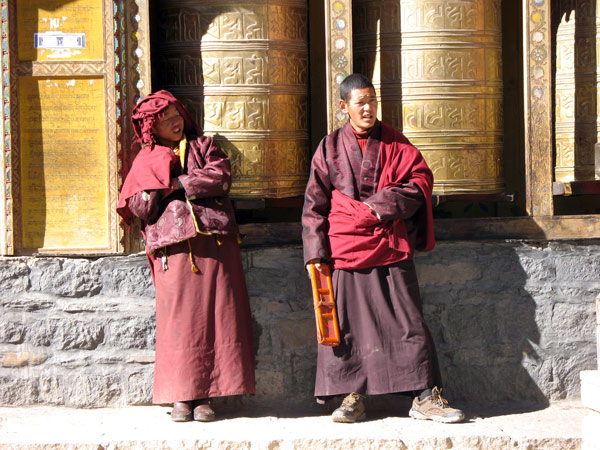 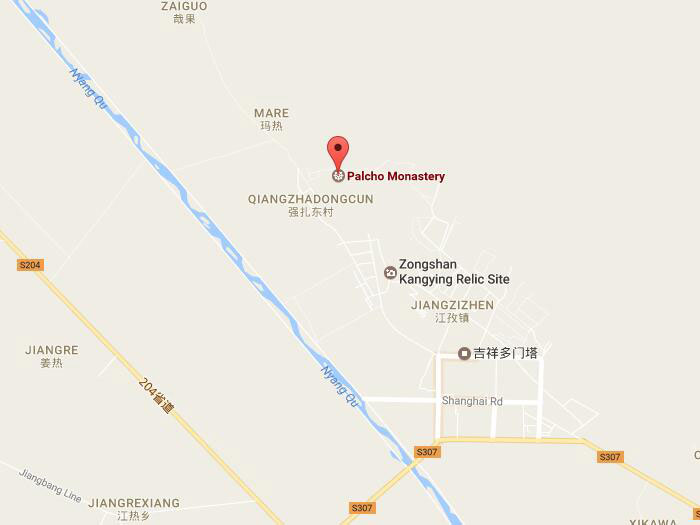 
Situated 160 km west of Shigatse, Sakya is the principal monastery of the Sakyapa Sect of Tibetan Buddhism. Its medieval Mongolian architecture is quite different from temples in Lhasa and Yarlung. Sakya Monastery is famed as the "Second Dunhuang" due to its colossal collection of numerous Tibetan Buddhist scriptures, murals and Thangkas.

The main architectures inside the castle are the Dajing Hall, the Buddhism Hall and the hall where the Sakya archbishop lived. They all preserve the style of Yuan architectures. The Dajing Hall is in the center of the temple and occupies an area of 5,700 square meters. The columns and walls inside it are all painted dark red. There are 40 columns, each 10 meters high. On the western, northern and southern sides are fresco corridors while on the eastern side is the hall where Sakyapa Masters are enshrined. To the north of Dajing Hall is the hall for Sakyapa archbishop, with monks dorms on its north and back.

On the shelves of the Dajing Hall and the Buddhism Hall are displayed various hand-written Buddhist scriptures and books of Ming and Qing dynasties. It has the largest number of books among all the temples in Tibet. These scriptures and books are precious materials for research into the Tibetan history.

Sakya Monastery “Sa” in the Tibetan language means "soil", "kya" in Tibetan language means "grey", so "Sakya" means "gray soil". Because of in the ridge there is a gray rock, through a long period of weathering the rock shaped like soil so it names Sakya. Sakya Monastery is divided into south and north monastery, Zhongqu River crosses between the two monasteries, north monastery is located in the north of the river under “gray earth”, south monastery is located in the south of river flat shore.

In 1073 (the Northern Song dynasty Xining period sixth year), Tubo aristocratic Khon family descendant Khon Khonchog Gyalpo (1034-1102) found that south mountain slopes the soil was white with sheen, presenting auspicious, so he funded monastery construction, but very humble, this is the predecessor of the north Sakya Monastery. His son, Sachen Kunga Nyingpo, and grandsons greatly developed the structure of the monastery, as well as its religious activities until it became a citadel of learning and meditation renowned throughout Asia.

During Yuan dynasty, people built a palace with eight pillars on the west side of the hall, commonly known as "uzsamar temple". Later generations of issachar prince of Dharma successively expanded the north temple on the hillside, many buildings have been built. After the 14th century, because of religious activity center gradually transferred to the south temple, there would be no large-scale construction in the north temple.

Many buildings collapsed in the 1950s, and in 1960s the buildings were sabotaged by human, most of the building only left in ruins, only Gonkhangnu, Lhazangtsa, Renqingang a few buildings repaired at the end of the 20th century to the early 21st century. Sakya South Monastery after several expansion and reparation, formed the scale of the magnificent buildings, which is flat square, and surrounded by walls, the total area of 14760 square meters.

From 2005 to 2007, the Shaanxi Provincial Institute of Archaeology cooperated with institute of the Protection of Cultural Relics in Tibet, carried out comprehensive archaeological investigation and partial excavation protection on the north temple ruins of Sakya Monastery.

【North Sakya Monastery】
Northern Monastery built along the Zhongqu River. There used to be many phodrang, lhakhang, ladrang, pagoda, stupas, etc, outbuildings. Sakya North Monastery was sabotaged during the Cultural Revolution, and the cultural relics were lost. To the early 21st century, Senkhang Nyingba has repaired according to the original appearance, three floors, including the underlying Jiayang practice hole, and the god of water in the hole.

3 ladrangs of 4 major ladrangs are located in the Sakya North Monastery:
Xituo Ladrang: Xituo Ladrang is 56.6 meters long, 40 meters wide, which is a rectangular courtyard, four floors, a total of 16.3 meters high. Originally this is the mansion that Drogön Chögyal Phagpa held the post of Sakya prince of Dharma who managed one hundred and thirty thousand households of Tibet; later it has been the seat of government of Sakya dynasty, eventually became one of the four ladrangs.

Renqingang Ladrang: it is the building of Phagpa period with a large scale, which is one of the four major ladrangs.

Duque Ladrang: it is also the building of Phagpa period, which is one of the four major ladrangs.

【South Sakya Monastery】
Sakya South Monastery is located in the flat land of Mayongzha in the south bank of Zhongqu River. It is said that when choosing south monastery site at first, the monks and devotees agreed that the monastery must have defense and fire prevention function, so they set up a cannon on the top of the mountain and the Baqin Phodrang and then shoot stones under the mountain, the results of a stone and fell in front of the hall to the left, and another stone fell in the middle of the square of the hall, immediately pour out spring, people considered it as auspicious sign, so he decided to build monastery here. Construction started in 1268 and was led by Benqen Sagya Sangbo under the commission of Choygal Phakpa, the fifth descendent of Sakyapa Sect. The walls of southern monastery were painted in red, white and grey which indicate Manjusri Bodhisattva, Avalokiteshvara and Vajradhara.

【Main Chanting Hall】
The Main Chanting Hall, also called Assembly Hall, or called Lakhang Chenmo in Tibetan, is a must-see for all visitors. With an area of about 1547.12 square meters, Lakhang Chenmo can hold about ten thousand monks chanting sutras together. It is 66.4 meters wide, 23.3 deep, inside there are 40 huge vermilion columns presenting 4*10 arrangements supporting the ceiling, four of which are about one meter in diameter. Each of the four columns of “Tiger” “Buff” “Kublai” and “Ink Blood” has its own story. Gyina Seqen Garna (Kublai Column) was bestowed by Kublai Khan. Chongbo Garwa (Buff Column), Dabo Garwa (Tiger Column) and Nabo Chaza Garwa (Ink Blood Column) were carried here by a wild yak, a tiger and the God of the Sea. In the hall are enshrined three Buddhas - Dipamkarara, Sakyamuni and Maitreya, and five Sakyapa ancestors. Besides, on the second floor of the hall are 63 murals of mandalas, the best preserved in the monastery. And west wall, south wall and north wall of the hall is sutra wall, the sutras shelves nearly touching the ceiling. At the sutras shelves, there are sutras written by gold, silver and jade powder of more than forty-four thousands.

【Pagodas Group】
On the west side of North Sakya Monastery distributed many number of pagodas, formed the scale huge pagodas, but most of them were in a state of disrepair. The archaeology compiled the pagodas forest of south and west of Deque Phodrang forⅠArea and Ⅱ Area. Ⅰ Area has 49 pagodas, Ⅱ Area has 66 pagodas.

【Chinese Name】: 萨迦寺
【Recommended Visiting Hours】: 2 hours
【Tourist tips】: Sakya Monastery is about 4310 meters above sea level, generally people will not have altitude sickness; Sakya Monastery is in Sakya town, tourists can accommodate there but the conditions is general, and the price is relatively cheaper than hotels in Shigatse. From Shigatse to Sakya, about 160 kilometers, in the city there are buses to Sakya Monastery.