Tibetan Buddhism is a form of Mahayana Buddhism that developed in Tibet and spread to neighboring countries of the Himalayas. Tibetan Buddhism is known for its rich mythology and iconography and for the practice of identifying the reincarnations of deceased spiritual masters.

Tibetan Buddhism has exerted extensive and profound influence on the Tibetan race. Buddhism spread into Tibet in the 7th century, and gradually infiltrates Tibet's history, politics, economics, culture, exchanges and habits and customs to become the most extensively worshipped religion of Tibetans.

• Early History
Early Legend: When the 28th btsan-po ruled the Tibet, there were sacred things given by heaven: a golden pogoda, Baibaichanghui Sutra, Baoqie Sutra and Six Words Heart Mantra.
Srongtsen Gampo Period: The large scale of introducing of the Buddhism started during the period of the establishment of Tibetan Empire. The Buddhism was introduced from Han and Indian. Srongtsen Gampo send 16 people to learn Sanskrit and Buddhist texts, and when they back, they created Tibetan characters and began to translate Buddhist texts. Srongtsen Gampo also made law to explicit order people believing in Buddhism.
Trisong Detsen Period: Trisong Detsen made great effort to develop and spread Buddhism. He welcomed Indian monks and padmasambhava to Tibet. Built Samya Monastery and invited 12 Indian monks to tonsure and teach 7 Tibetan nobles, which are the first batch of monks in Tibet. He also translated a great number of Buddhism texts, also some Chinese. So the 3 treasures of Buddhism- Buddha, Buddhist Text and monks are all ready.
Tritsu Detsen Period: The main measurements of Tritsu Detsen was built Wuxiangduo Monastery, making the regulation that one monk of each 7 families, Tibetan characters setting, uniting translation examples.
Glang Darma Period: In the middle of the Ninth Century, Tibetan Buddhism was destroyed. From 842 to 978, Buddhism was silent in Tibet.
• Later History
100 years after Glang Darma exterminate the Buddhism, the Buddhism was introduced to original Xikang and Weizang Districts, and Tibetan Buddhism revived.
At this period, Tibetan Buddhism’s features were more and more distinctive. It combined the Indian and Han Buddhism, and absorbed Bon’s deities and rituals. Mahayana was the main Buddhist doctrine, and Sutrayana and Esoteric Buddhism minored in together. For the organization, there were several sects. The main sects are Nyingma Sect, Kagyu Sect, Sakya Sect, Kadam Sect and Gelug Sect. 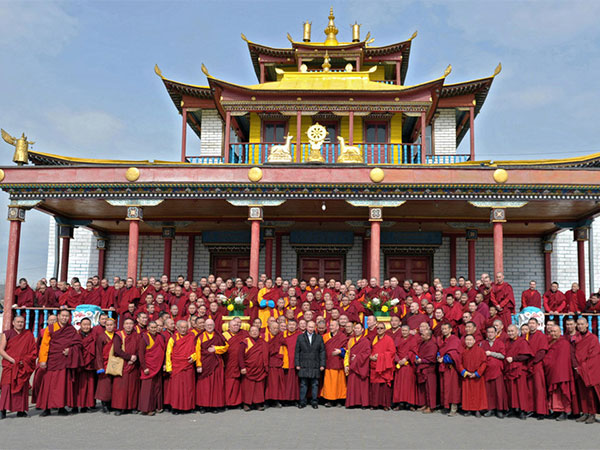 Nyingma Sect: the oldest sect in Tibet Buddhism. Nyingma means old and ancient in Tibetan language. The monks of the sect are wearing red hat, so it also named Red Sect. This faction is loosely organized and lacks a strict system. The Nyingma particularly believes in hidden terma treasures and place an emphasis on Dzogchen. 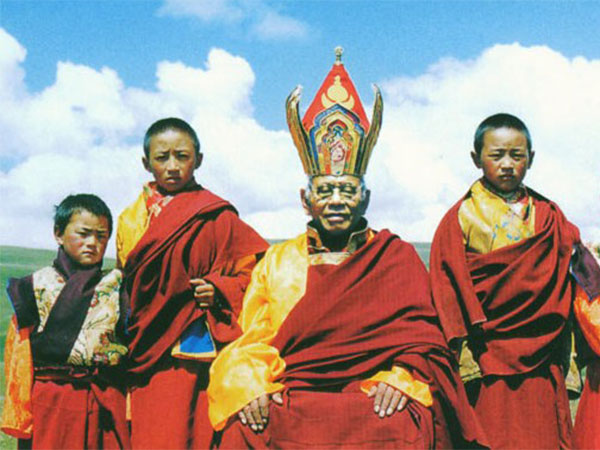 Sakya Sect: The Sakya tradition developed during the second period of translation of Buddhist scripture from Sanskrit into Tibetan in the late 11th century. It was founded by Drogmi, a famous scholar and translator who had studied at the Vikramashila directly under Naropa, Ratnākaraśānti, Vagishvakirti and other great panditas from India for twelve years.

In its heyday, there were monasteries in Mongolia, Xikang and Tibet. After that, the monasteries declined one after another, and only the famous Degegongqin Monastery in Sichuan remained.

Sakya means grey white land in Tibetan language, as its main monastery-Sakya Monastery was built on the grey white land. The monasteries of this sect are painted red, white, black, the three colors which relatively refers to Manjusri, Avalokitesvara and Vajrapani, on the wall, and it is also called Hua Sect. 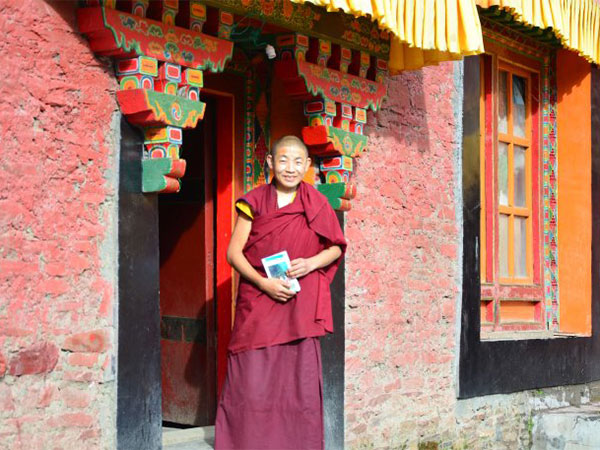 Kagyu Sect: the one with largest number of smaller sects. Kagyu means “pass on through oral instruction”. It had two founders, Khyung-po-rnal-vbyong-pa and Marpa Lotsawa. As the monks wear white clothes, so it is also named White Sect. The central teaching of Kagyu is the doctrine of Mahamudra, "the Great Seal". 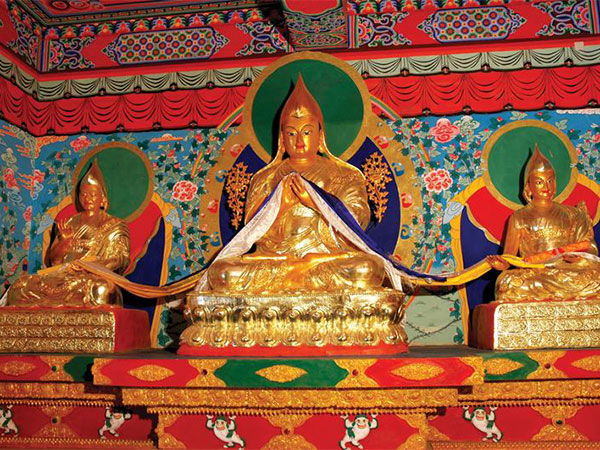 Gelug Sect: the newest of the schools of Tibetan Buddhism. It was founded by Je Tsongkhapa (1357–1419), a philosopher and Tibetan religious leader. Dge-lugs-pa in Tibetan language, which means good rule. It is also name Yellow Sect, as monks wear yellow hats. Gelug Sect has distinctive characteristics and strict management system, which making it become one of the important sects in Tibetan Buddhism.

Kadam Sect: One of the lamas. "Kadam", which means "teaching commandments in Buddhist language" in Tibetan, believes that all Buddhist language is a commandment to guide believers in spiritual practice. In the eleventh century, it was founded by the Tibetan monk Dromtonba. In the first year of Jiayou in Song dynasty (1056), a sect was formed and spread widely in the 12th and 3rd centuries. This sect was later incorporated into the Gelug sect.

The fundamental ashram is the Reting Monastery.

1. Lama
Dalai Lama in Tibet is the spiritual leader of Tibetan Buddhism and is considered as a reincarnation of Lord Buddha.

Lama, in Tibetan language, means “superior master” or “superior man”. Normal monks used to called “Drakpa” in Tibet, and later, they were also called “lama”.
2. Prayer Wheels
One of the most famous aspects of Tibetan Buddhism is the prayer wheels. These are turned by the faithful in the conviction that the prayer will go up in the air and help humanity gain enlightenment.
3. Inheritance Way
Inheritance from master to apprentice: Nyingma Sect, Kagyu Sect, Kadam Sect.

Living Buddha inheritance way is most unique one. Unification of the state and the church is a distinctive character of Tibetan Buddhism, which ended after the liberation of Tibet.
4. Religious Doctrine
Tibetan Buddhism Doctrine contains both Hinayana and Mahayana, exotoric and esoteric Buddhism, and absorbs some character of Bon. The inheritance way is various, sadhana drubtab is complicated, which are the outstanding features different from Han Buddhism.