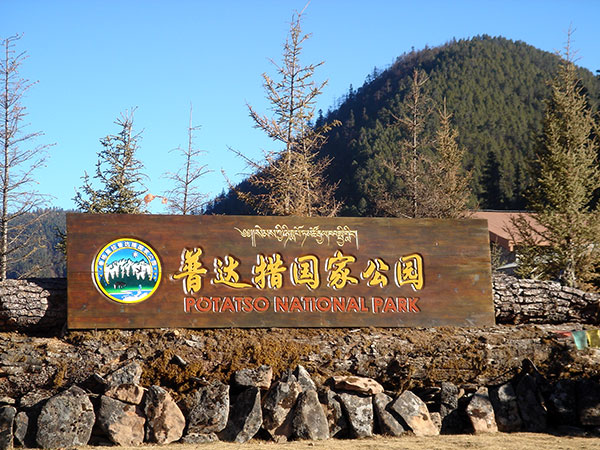 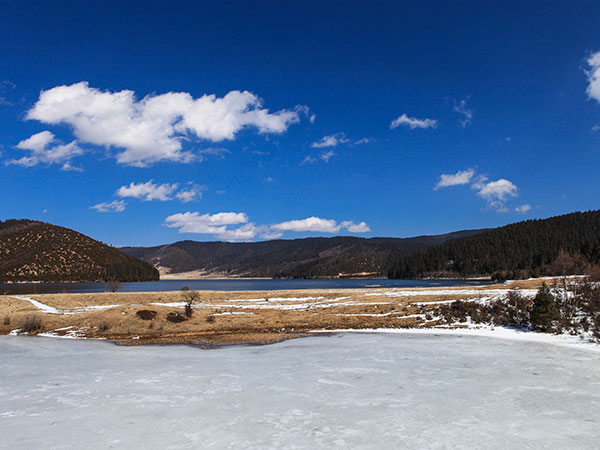 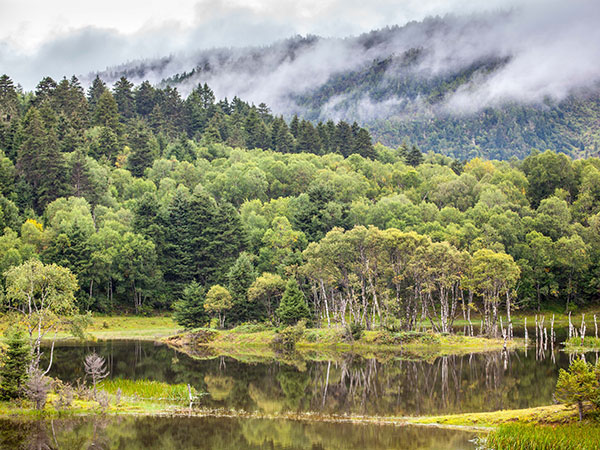 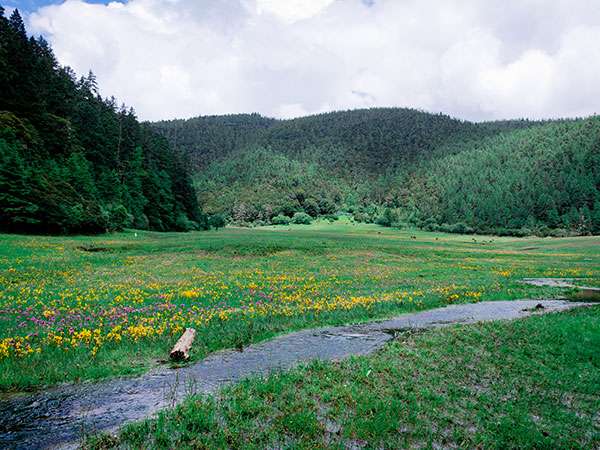 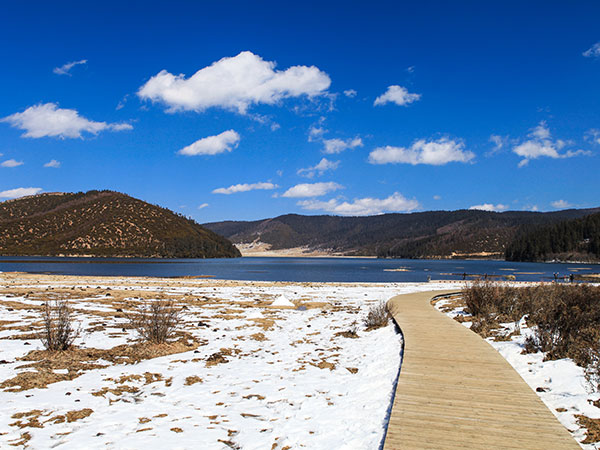 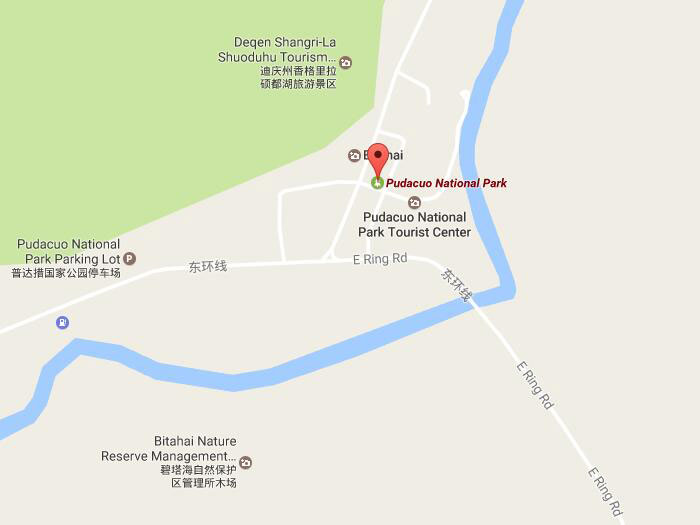 
Located 22km east of Shangri-La, Potatso is the first national park in mainland China. In Tibetan language, Patatso means reaching the opposite side of the lake by boat under the help of deity. Bitahai Lake and Shuduhu Lake are two major parts of the park. Besides these two lakes, forest, marsh, valley, alpine meadow and so on can be seen in the park. All major spots are connected by walkable plank which offers a closer distance for travelers to experience the natural environment.

Potatso National Park is the first national park on China mainland which was open to visitors in 2007. It is located in the east of Shangri-la about 19 kilometers away. Potatso is the transliteration of “Putuo”, or “Mandala”, refers to the sacred mountain of Avalokiteshvara. “Putuo” or “Pota” means a boat to ferry people away from sufferings. And “Tso” in Tibetan language means lake, so Potatso means “Boat Lake. Potatso used to be the original Tibetan name for Baitahai Lake where we can see an isle called Mandala or Mantuluo. Potatso is an unearthly world without pollution, far away from the bustle and hustle world.

Potatso National Park consists of Baitahai, Shudu Lake and Militang Pasture. The Potatso National Park is 3,500 meters to 4,000 meters above the sea level. Potatso National Park is an inseparable part of the world natural heritage Three Parallel Rivers by UNESCO, it also serves as a natural reserve. Potatso Park has a well-preserved eco-environment, which has marsh, brooks, lakes, and springs. virgin forests, flora and rare fauna. And during summer, the amazing sceneries of Potatso Park made people call it the home for rhododendron, meconopsis, spruce, primrose, fir, and other rare plants. Also there are many wild lives in the park, for example, wild boar, leopard, musk deer, pheasant and other different species of birds.

【Bitahai Lake】
As the highest lake in Yunnan, Bitahai Lake is 3,500m above the sea level. Covering an area of about 159 hectares with an average depth of 20m, Bitaihai Lake is famous for its limpid water and its beautiful scenery which is set against the mountains and with forests surrounding it. In ancient Tibetan language, Bita means the area heavily covered with trees. One can find century-old pines and cypresses grow around the lake, in which the water is crystal clear. In the lake there is an islet covered by cedars and azaleas. In spring, when the withered azalea flowers fall into the lake and are eaten by fish, the fish seem to be unconscious and almost drunk. They float on the surface with their abdomen facing the sky. Around the lake are virgin forests - ideal habitat for rare animals including red-footed pheasant, silver pheasant, wide bull, leopard and lynx.

【Shuduhu Lake】
Clear water, lovely fish, herds of cows and sheep, and surrounded by lots of primitive forests is the truly description of Shuduhu Lake. The lake water is so limpid that people could see Shudu cracked-stomach fish produced in the lake whose color is golden and there is a crack line along its stomach. 'Shu' means cheese in Tibetan and 'Du' has the meaning of stone. It has a legend that in ancient times, an eminent monk roamed from place to place, one day, he arrived here. The herdsmen supported and treated him with cheese. The eminent monk was glad to see that the cheese of the pastureland of Shudukang is as strong as stone, so he prayed 'wish the cheese here is as strong as stone forever'. From then on the name of Shudukang came into being.

【Militang】
Militang is the vastest pastureland in Potatso Nationa Park and it is between Baitahai and Shudu Lake. There are scattered with yaks and cabbage-like grass which is called Yak-butter Grass by locals because the local Tibetans uses the leaves to wrap yak butter. People can have a eye outline when overlooked the Militang, so it means “the Buddha’s eye” in Tibetan language.

【Cultural Village】
Visiting to the Xiagei Tibetan village, people will feel like entering the of primitive simplicity, walking into life, and into the colorful folk custom, although this is the human landscape outside Potatso National Park scenic area, but against the background of the natural landscape the village is very affectionate.

In a Tibetan customs house, there is displaying with woodwares, thangka, the production process and finished product of yak bone carving craft, which highlight the Tibetan wisdom and art. The piles of mani stone guarded beside the scenic spot of Potatso and the prayer wheel that never stop turning along the stream, bearing the weight of the beliefs and hopes of Tibetan people, at the moment, the strong religious atmosphere itself is a human landscape.

1. The total altitude of Potatso National Park is between 3,500 meters to 4,150 meters. In order to prevent altitude stress, it is suggest that do not do any strenuous exercises and take along suitable and related medicines.
2. With the high altitude and unpredictably changed highland climate of Potatso National Park, whenever you visit the park, remember to bring warm clothes and rain gear. If you need, there is down jacket rental service in the entry of park.
3. Generally it takes about 3 to 5 hours to visit Potatso National Park, recommending bringing your own foods, or you can enjoy a little bit expensive foods in the dinning room of the park.

【Chartering Car】
In the Shangri-la county, there are cars rental. The driver will wait for you in the entry of park.

【By Taxi】
In the Shangri-la ancient town, there are taxis for car pooling, which is cheaper than chartering a taxi. Pay attention to make appointment with driver about when to pick you up and leave the driver’s telephone number in case of you can’t find car to go back.

【Chinese Name】: 普达措国家公园
【Recommended Visiting Hours】: 3 to 4 hours
【Best Time to Travel Potatso National Park】: it is suitable to visit Potatso National Park all year around. Different season has different view. In the spring people can appreciate the alpine meadow with a hundreds flowers in bloom and full mountain of azaleas. In the summer, people can relieve summer heat with full mountain of green, at the same time, there are meadow spread blooming azaleas. In the autumn, people can enjoy the multicolored dense forest. And in the winter, people can view the dark blue lake in a snowy world.