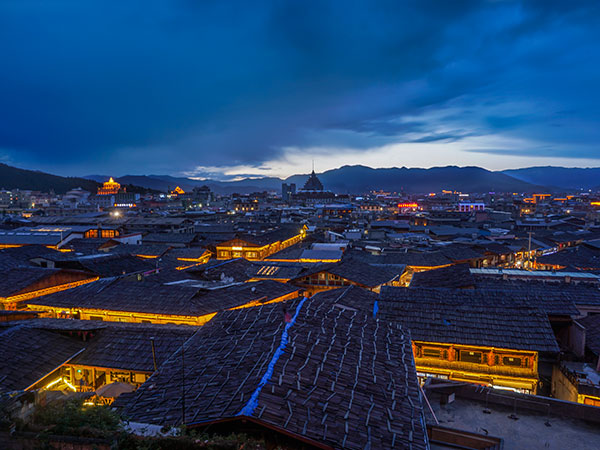 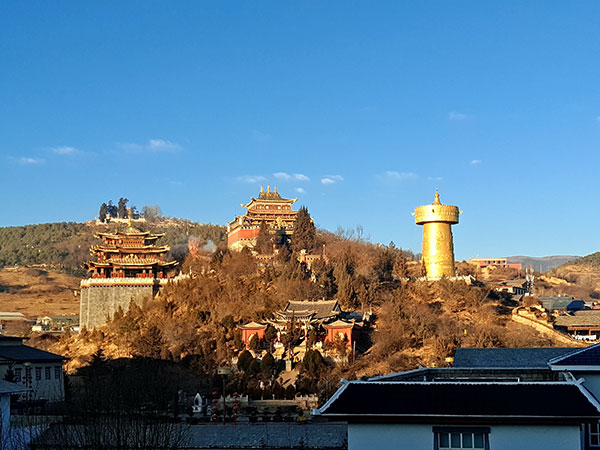 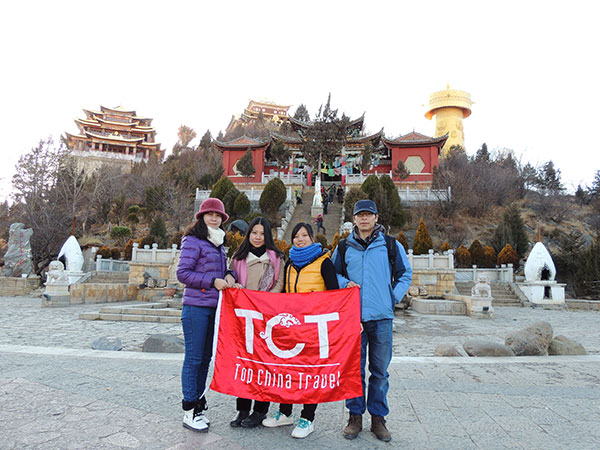 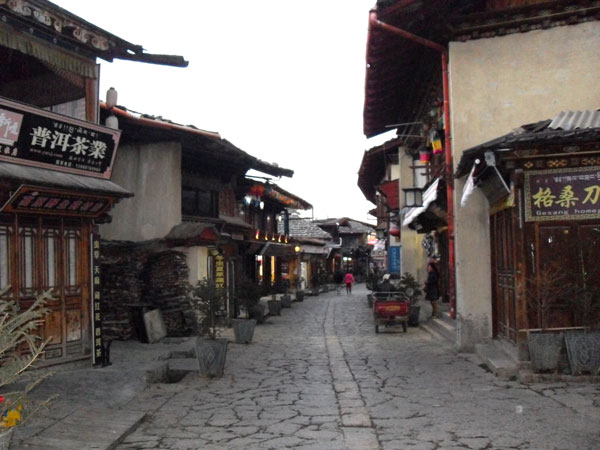 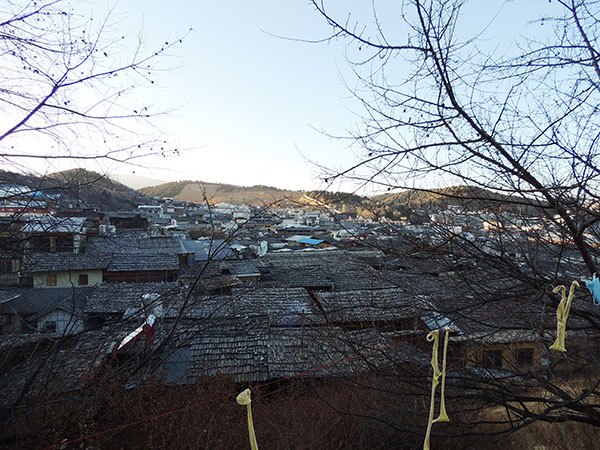 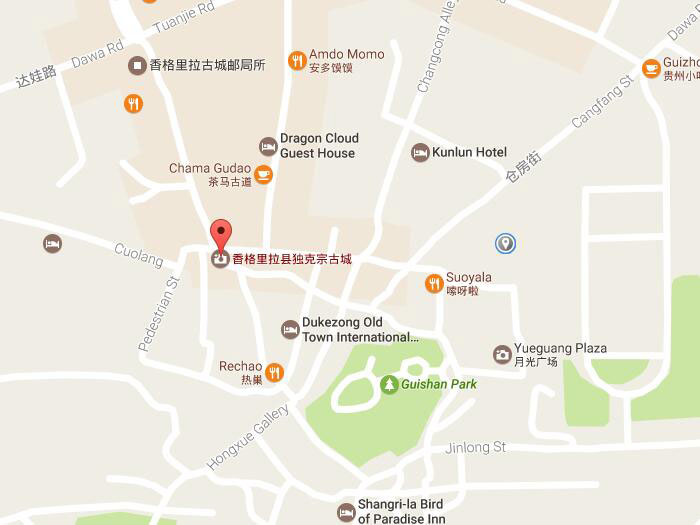 
Dukezong, a Tibetan town located in Shangri-La, offers sanctuary to all those seeking refuge from the busy city life.

The authentic Tibetan dwellings in Dukezong, gilded prayer halls and pagodas, and lanterns of various shapes lighting the way along narrow, winding lanes are permeated with the grace as well as the mystique of antiquity that enchants visitors the moment they set foot in it. Dukezong was a key stop on the Ancient Tea-horse Road and a focal point for Han-Tibetan exchanges. It is the largest and best-preserved Tibetan city among China 147 Tibetan counties. It is also site of the largest ancient Tibetan community. There was human life in Shangri-La at the Paleolithic Age, and a tribal society inhabited it during the Western Zhou Dynasty (1100-771 BC). It was in the 7th century that the Tubo Regime conquered Deqin, and then built Dukezong. As one of the oldest towns in the region, it is also known as the 'footstep of Shangri-La'. According to Tibetan Buddhist scriptures, there is a lost city called Shambhala in the Snow Mountains, shaped like an eight-petal lotus flower. The 1.6-square-kilometer Dukezong Town is also laid out in this design. All 1,084 of its houses radiate out from Turtle Hill at the center, arranged in conformity with Tibetan Buddhist geomantic theory.

Dukezong is situated at an altitude of 3,200m above sea level, and is 700km from Kunming. The town has a history of 1,300 years, during which it has experienced both the flames of war and prosperity of frontier trade. Tibetans regard the shade of white as a sign of respect for their forefathers, the ancient Qiang people, who worshipped white stones. Shortly after the town was established, craftsmen found white clay in the region that could be ground down and used as paint. All dwellings were accordingly painted white. This is why Dukezong was named white stone city. On a clear night, the ancient town reflects a silver sheen. This has engendered to another epithet: moonlight city. Its counterpart is Niwangzong Town by the Naizi River, known as the sunshine city. The Sun and Moon cities gave rise to the song 'Sun and Moon in the Heart', which Tibetans have sung for more than 1,000 years.

The old Tibetan way of life, as well as dwellings, are well-preserved in Dukezong, as each barley wine-redolent lane testifies. Tibetan chess is played in local households as it has been for the past 1,000 years, and horse bells still tinkle along the ancient caravan path. Bonfires that are lit in the town square every night illuminate local musicians as they sing to and play traditional stringed instruments.

The old style jewelry, painted scrolls, cottage industry-produced earthenware, incense and religious ornaments can be found at the town. As its fame has reached far beyond China borders, this ancient town is also surprisingly cosmopolitan. People of different cultures staying in the Yunnan Tibet Posthouse communicate with ease, despite having no common language. The Hazelnut Bar is popular as a comfortable venue in which to observe and learn about Tibetan song and dance, and the Delhamo Bookstore is a good place to take a break during an afternoon stroll. In the depths of one lane American Amy is working hard on renovations to an old hut she has rented. William from Britain is busy organizing an exhibition of his photographic works. Carter S. Malik, wife of Khalid Malik, UN resident coordinator in China, also once enjoyed a sojourn in a leased house in Dukezong. Dukezong, this land of love, peace and sunshine, has always drawn throngs of migrants and travelers. Artists find it a source of inspiration, and those jaded from city life come here to get away from its purely material pursuits. Dukezong boasts the dual accomplishments of a perfectly preserved aboriginal culture in a town open to modernity and progress.

In Tang dynasty, the northwest of Yunnan (including the Diqing area) belongs to the Tubo dynasty. In Tang dynasty 676 A.D. to 679 A.D., Tubo established Shenchuan Chief Military Commission in Weixi, set up Guanzhai in Dagui Mountain now, and heaped stone for the city, called “Dukezong”, that is the famous "iron bridge east city" in the history.

In the Ming dynasty, Shangri-la was occupied twice by Lijiang's Tusi Mu’s Family, Tusi Mu’s Family built "Xiangewa" village in Dagui Mountain, in Tibetan language means stone fortress, and the site was the original “Dukezong” in Dagui Mountain. Later, they built “Danian Yuwa” village in Naizi riverside, in Tibetan language was called "Niwangzong", that is, the City of Sunlight. Two villages brought out the best in each other and constituted famous "Xiang Ge Ni Wa" in history of Shangri-la, namely the Tibetan area famous city "Sun and Moon City ".

Dukezong Ancient City has always been tea-horse interchange trade thoroughfare of Yunnan, Sichuan and Tibet, in Kangxi twenty-seventh year (1688), Dalai Lama requested mutual trade in Jinsha River, and the Qing government granted set up market in Shangri-la, Dukezong had become an important fair trade of Yunnan-Tibet. During the period of Emperor Yongzheng and Emperor Qianlong, the domestic mining was thriving, and there were many merchants gathered in here.

During the Anti-Japanese War, the Japanese aggressors occupied Burma and cut off Burma transportation, a large number of material assistance can only arrived in Kunming across the Himalayas from Lhasa by northwest Yunnan, the county also became a transit point to Yunnan, Tibet and India trade.

In addition, in 1936, Helong led the Second and Sixth Front Army of the Chinese Workers' and Peasants' Red Army marching through the Shangri-la, he set up headquarter in two wing rooms of Sutra Scriptorium in Dukezong Ancient Town, and they held important meeting in here.