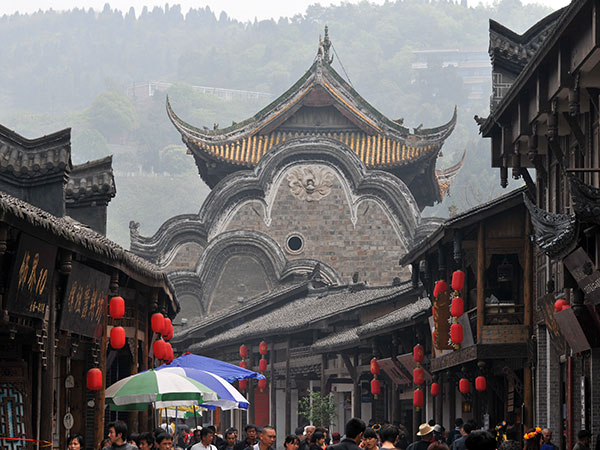 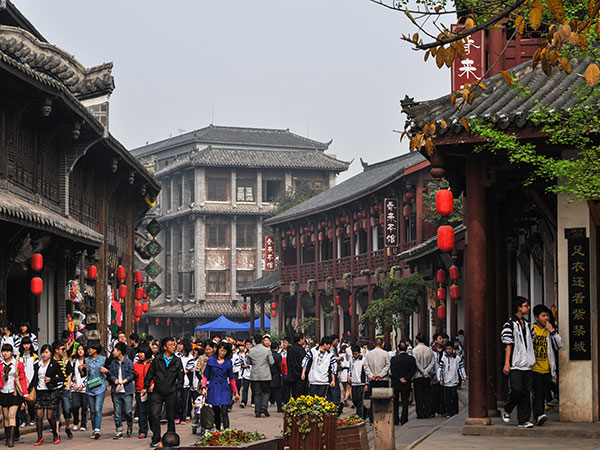 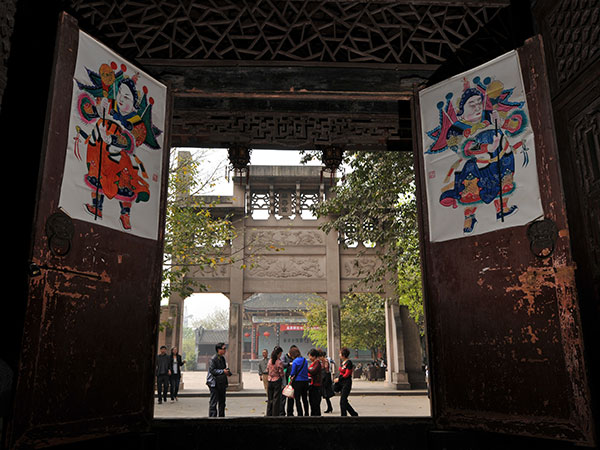 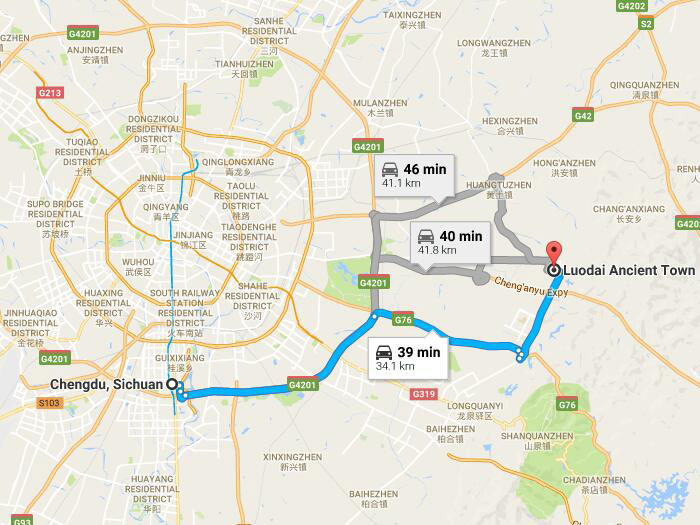 The most intact ancient town of Hakka in Chengdu suburb


Luodai ancient town is located in Luodai Town, Longquanyi district of Chengdu, only 18 km from downtown Chengdu, 10 kilometers north of Longquan Town, is the most intact hakka ancient town near Chengdu, known as the "The first town of Hakka in the world". It is located in the Longquan mountains midway Second Emei Mountain foothill, was built in The Three Kingdoms Shu-Han period, the legend is that Shu-Han Emperor Liu Chan’s jade belt fell into the octagon well near the town, so it gained the name Luo Dai (belt falling). 90% of the residents in the town are Hakka, so it also known as "The first town of Hakka in West China". With very thick, ancient culture, the one thousand year old street and hakka folk houses in town are well-preserved, old street is in the pattern of "a street with seven alleys"; On both sides of the streets lined with shops, is a typical of the Ming and Qing dynasty architectural style. As it were, Luodai Ancient Town is the concentrated history of hakka immigrants, which has historic, architecture, culture, and science value.
Now except these old buildings, Luodai Ancient Town has become a part of the Chengdu city. Chengdu citizens often come here at the weekend, wine and dine, playing mahjong, the locals always say that Luodai Ancient Town is the back garden of Chengdu people. In Luodai Ancient town, there are a lot of frontage teahouses, just sit down for a cup of tea, a few people gather together to play mahjong, it is very comfortable.

Luodai Ancient Town has a long history, from Han dynasty it had been a street, named "Wanjing street "; During Three Kingdoms period, the Shu prime minister (in ancient China) Zhuge Liang revived the market, changed its name to "Wanfu street"; Because of Shu-Han emperor Liu Chan’s jade belt fell into the town beside a well and therefore renamed it as "Luodai". Tang and Song dynasty it affiliated to Lingquan county Chengdu government (now Longquanyi district), in the Ming dynasty was renamed Jianzhou state (now Jianyang), and in Qing dynasty was renamed as "Zengzichang". In 1950, Jianyang eighth districts established, district people's government stationed in Luodai Jiangxi Guild Hall. In 1955, Luodai has become Jianyang 14th district, and it has jurisdiction over 10 townships. In 1976, ten communes under Luodai town were put under administration of Longquan.
The Chinese characters of Luodai were originally, which got its name from two sources: First, according to legend, Liu Adou, the crown prince of Shu in Three Kingdoms, inadvertently dropped his jade belt into an octagonal well because of catching a carp when he was playing in the town, so the town was called Luodai; second, as there was a river resembling a jade belt in shape, thus the town was called Luodai. Afterwards, it was gradually simplified and accepted through common practice as.

Hakka Tulou Museum, Linnan block, Hakka Food Court area of Boke Small Town first phase is more than 20000 square meters, there will be more than 30 shops, and Luodai folk art protection development center which consists of New Year pictures, clay sculpture, bamboo weaving, sachets and other non-material heritage will take root in the Tulou Museum. Visitors could enter the Tulou Museum to have close contact of non-material heritage, also can taste block from a wide variety of hakka cuisine and the characteristics snacks in Hakka Food Court, and go into the classical furniture life pavilion, galleries and other cultural art district to enjoy artistic and cultural charm.
Luodia Ancient Town is a Hakka town which possesses very abundant tourism resources and very profound cultural foundation. Luodai scenic zone mainly includes Luodai Ancient Town Core Protection Area, Jinlonghu Scenic Spot and Baosheng Original Ecological Hakka Village. The old street for thousands of years and Hakka dwellings are kept intact in the town. “One street” is composed of up street and down street, which is about 8 meters wide and 1,200 meters long, higher in the east and lower in the west and inlaid with flagstones, and it is the main street in the town; on both sides of the street crisscrosses “seven lanes”, North Lane, Fengyi Lane, Huaishu Lane, Jiangxi Guildhall Lane, Chaishi Lane, Macaoyan Lane and Kangshi Lane respectively. The town is especially well-known for four guild halls (Guangdong Guildhall, Jiangxi Guildhall, Huguang Guildhall and Chuanbei Guildhall) and Hakka Museum.
【Guangdong Guild Hall】
Guangdong Guild Hall is located in the up streets of Luodai ancient town, also known as "Nanhua Palace (south China palace)", built in the Qing dynasty. The hall consists of the gate to monastery, front, middle and rear three atriums and the left and right wing-room. Hall central is hanging a couplet of antique beauty, which described the current situation of the hakka culture integrated into the local life. Guangdong Guild Hall is well-preserved, and is considered to be one of the most complete domestic existing grand guild halls. Local hakka often held some hakka folk activities here, such as eating hakka dishes there, dress in hakka, sleeping flower bed, etc.
【Hakka Museum】
The Hakka Museum is Hakka Guild Hall, typical Ming and Qing dynasty architectural style. On the wall and canopy, there is carving dragon and painted phoenix with exquisite and realistic modeling, which has high art appreciation value. Multiple halls in the museum, respectively show the hakka legacy of articles for daily use, and other items, it can be seen that the process of hakka blended into the local, is a concentrated the history of hakka immigrants.
【Yudai Lake (Jade Belt Lake)】
Water storage capacity is 1.2 million cubic meters, surrounded by flowers and fruit throughout the year, and here is beautiful environment with fresh air. Visitors can take a boat here, it is a great place for people to relax.
【Gold Dragon Temple】
Gold Dragon Great Wall is known as "Luodai Great Wall, located in Chengdu Luodai Town. Gold Dragon Great Wall is the largest simulation of the Great Wall of China at the present time, which is lying down Jiuquan Mountain (Nine Springs Mountain), starts at the Gold Dragon Lake Scenic Area door, along the ridge and up to the Gold Dragon Temple, total length of 1680 meters, 4 meters high and 3 meters wide, with a total of beacon towers.
Look at the foot of the mountain: blue bricks, stone, beacon tower, the crenel, embrasure...The "Great Wall" seems to be not big difference with the real Great Wall. All the way, "Great Wall", both inside and outside the scenery is pleasant. Especially along the ridges and peaks, both sides is full of lush trees, tall wild plants still hang on full of red fruit.

【Fire Dragon Festival】
“Liu Family Dragon” of Luodai Hakka dragon dance is the most famous, which gained it name because all persons who take part in performing the dragon dance are from Liu family Hakkas whose native place is Jiangxi province. People from Liu family have been lived in Luodai Town for 14 generations and more than 300 years. It has been more than 300 years that they perform the dragon dance in the ancient town in festivals. The dragon dance of Liu family, directly developed from ancient Chinese dragon dance, which has a long history and is passed down within the family uninterruptedly. Hence, it conserves the most original procedures and of primitive simplicity rituals of ancient Chinese dragon dance.
【Water Dragon Festival】
Water Dragon Festival is the most important and unique festival in Luodai Ancient Town. Because of the central plains war, hakka people moved to the coast at the earliest. Coastal water is abundant, and there are rich natural resources that the hakka people live in abundance. It is said that it is due to hakkas have close contact with the dragon king of East China Sea. In order to thank for the East China Sea dragon king timely rain, hakkas all dance to celebrate harvest in summer, become a custom through long time usage. All dragon dancers are bare-shirted and only in a pair of shorts to move up and down; spectators splash water on dancers and dragon with squirt guns and basins and chase and block them from front and back. Hakkas regard water as wealth. The wetter they are splashed, the more probable they will get wealth.