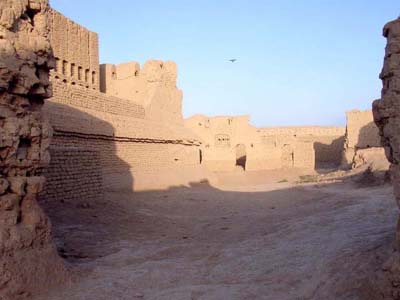 
The Subashi Ruins are located 23 km (14 miles) northwest of Kuqa County. The ruins which reflect Subashi's past brilliance are divided by Kuqa River into eastern and western areas. Reached its heyday during 6th century and 8th century, Subashi Temple witnessed the development of Buddhism in central Xinjiang. It was finally abandoned from 13th century when Islam was introduced to Xinjiang and began to prevail.

Subashi Temple was a Buddhism temple, which was built in the first century and reached its peak during the sixth to the eighth centuries in the Sui and Tang dynasties. In the Tang Dynasty (618 - 907), the hierarch Xuanzang was pulled by the splendor of the temple and the popularity of Buddhism in this area, and stayed here for more than 2 months on his way to India to get Buddhist sutra. Then over 10 thousand monks and many hierarchs came from the interior of China to promote and develop Buddhism here. In the ninth century, the temple was destroyed by wars and never recovered. Only pagodas, murals and other discoveries witness the prosperity and wane in this land.