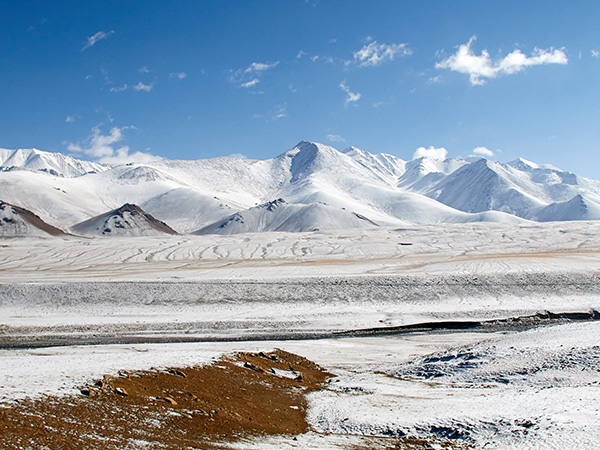 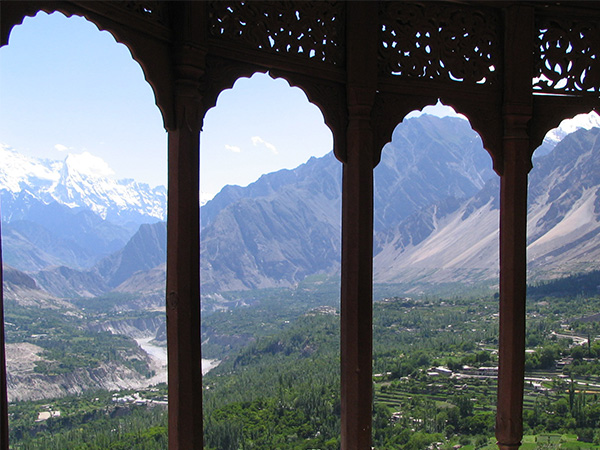 
The Karakoram Range, in Turkish means "black rock". Karakoram Range is one of the tall mountains of the world's most developed glaciers and one of the famous mountains in Asia.
About 480 kilometers from Afghanistan's most east extend to southeast. Width is about 240 kilometers, the length of 800 km. The altitude is with an average of more than 5500 meters above sea level. It is the world's longest mountain and high latitudes to the largest concentration of glaciers. The border of Tajikistan, China and India, Pakistan and Afghanistan are crossed in these mountains in the entire world, giving this remote area of the huge geopolitical significance. Karakorum derived from ancient Mongolian "Heihe" or the transliteration of the word "blackwater", the English writings appeared in the early 19th century. According to the Turkic, Karakoram means "black rock", the emergence of this name is first in the English work.
♦ Geography

Karakoram Range is between Tibet and Kashmir which is one of the trends and in parallel with Punjab-Himalayan (parts of the great Himalaya's big mountains). It is the second highest mountains in the world. And it is Northwest-southeast direction, go through the northern India and Pakistan.
Karakoram is with an average elevation of 6000 meters, a total of 19 mountains of which are more than 7260 meters, eight peaks over 7500 meters, 4 of which are more than 8000 meters. The mountains are steep with a sharp-pointed shape, and there are many Snow Mountains and huge glaciers. It is surrounding by several hundreds of pinnacles and peaks.
Terrain is characterized by lofty mountains and steep hills. South slope is long and steep; North Slope is steep but short. Precipice and fall stone (large accumulation of huge rockslides) occupied the vast area. Rocky slope is widespread in mountain valleys. Transverse valleys usually are narrow, deep, steep.
♦ Climate
The mountain's climate is largely driven by a half dry wind and continental climate. Southern slope due to the influence from the Indian Ocean monsoon and become humid, but it is extremely dry in the North Slope. At the bottom of the hill and central hill, there is less rain and snow; the average annual rainfall is less than 100 mm. At an altitude of more than 4877 meters, the rain is drop in a solid form, however, even if the height is lower on June, snow are common. In the warmest month, at an altitude of about 5700 meters, the average temperature is lower than 0 ℃; between 3900 ~ 5700 meters above sea level, the temperature is below 10 ℃.Thin air, strong solar radiation, strong winds and temperature differences, is a unique climate characteristic in the region. High altitude snow of extreme conditions will form the melting snow dome. The upward movement of the wind facilitate to a wide range of wind erosion.

♦ Residents
Karakoram area is in harsh natural conditions, the traffic here is undeveloped and the population is sparsely. The total area is about 20 square kilometers with a population of only tens of thousands. Below the 4400 meters mainly lives the Tibetan, more of them are making living by farming barley, oats, corn, almond, and raising livestock. A few engaged in animal husbandry, nomadic or semi-nomadic, and livestock is mainly yak, dzo, sheep and goats, or engaged in hunting.
♦ The best season for climbing:
Optimal climbing season is entering mountain in May to early June, and climbing mountain in July to September.