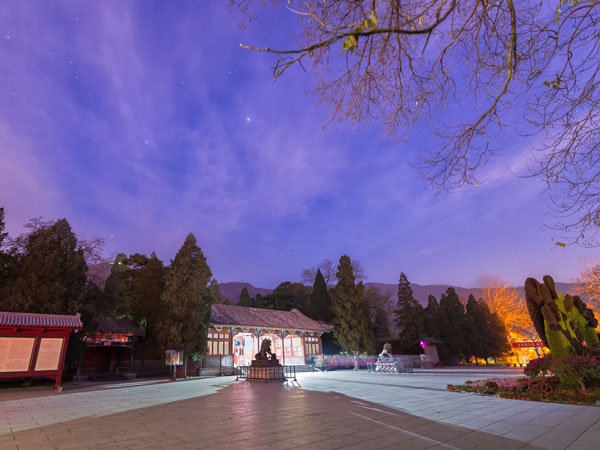 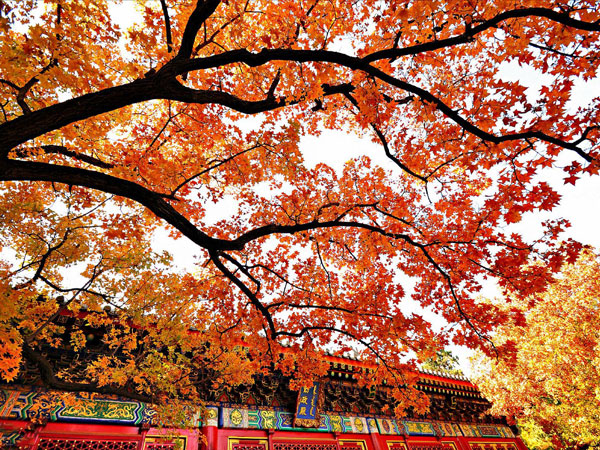 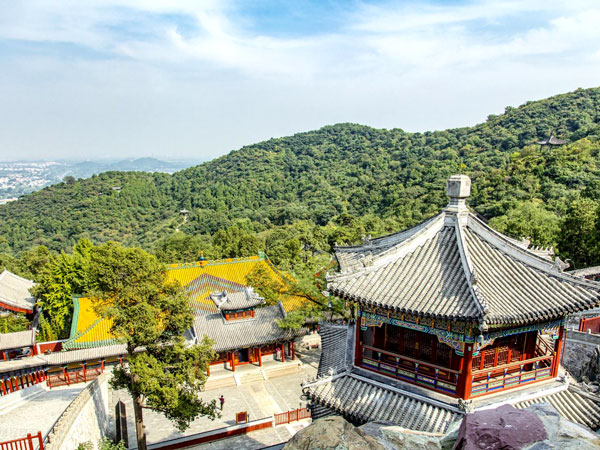 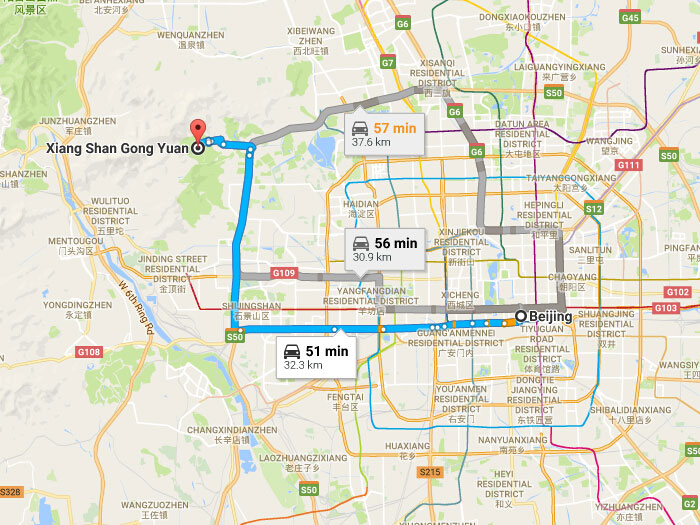 The Fragrant Hills is a public park at the foot of the Western Mountains in the Haidian District, and located in the northwestern part of Beijing, China. It consists of a natural pine-cypress forest, hills with maple trees, smoke trees and persimmon trees, as well as landscaped areas with traditional architecture and cultural relics. The name derives from the park's highest peak - Xianglu Feng, a hill with two large stones resembling incense burners at the top.
The park was established in 1186 in the Jin Dynasty and expanded during the Yuan Dynasty and Ming Dynasty. In 1745, Emperor Qianlong ordered the addition of many new halls, pavilions and gardens and gave it a new name, Jingyi Garden, the Garden of Tranquility and Pleasure. Many of the remains in the park were damaged by foreign troops during two major attacks. In 1860, British troops set the Old Summer Palace ablaze, burning it to the ground along with the Gardens of Perfect Brightness, causing extensive damage to many relics in the park. Another attack in 1900 by the Eight-Nation Alliance caused destruction to the park and to the Summer Palace built by Empress Dowager Cixi. Since 1949, the Chinese government has been engaged in continuous restoration and development in the area.
Fragrant Hills Park is recognized as one of the major tourist attractions in Beijing. When autumn arrives, the natural scenery in the park turns spectacular, with fiery red smoke tree leaves covering the mountain side. Every year, thousands of tourists ride the cable cars through the park in order see the hills in autumn colors. The grand opening of the annual Red Leaf Festival of Beijing takes place there.

There are two main routes through the park.
One route goes through the north area, with Spectacles Lake and the bridge, Study of Reading Heart and Bright Temple. Study of Reading Heart was built in the Ming Dynasty from 1368 to 1644 and is a landscaped park inside Fragrant Hills Park. Bright Temple is a large Tibetan style lamasery complex built in 1780 as the residence for the sixth Panchen Lama during his visits to Emperor Qianlong. Buildings in the complex have partially been burned down. Among the surviving treasures are a majestic glazed-tiled archway in front of the complex, a terrace and a glazed-tiled pagoda. Bells hung on the eaves of the pagoda chime in breeze.
The second route leads through the south area of the park. Main attractions along the route include Tranquility Green Lake, Shuangqing Villa, Fragrant Temple, and Incense Burner Peak. This route is more difficult because it leads across the highest peak, Incense Burner Peak.

Another point of interest in the park is the Shuangqing Villa, once the residence of Mao Zedong and also an early site for the headquarters of the Central Committee of the Communist Party of China. It is also known for I M Pei's work - the Fragrant Hills Hotel.