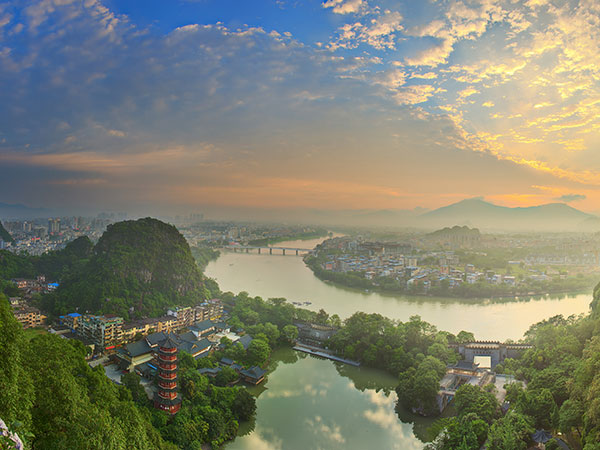 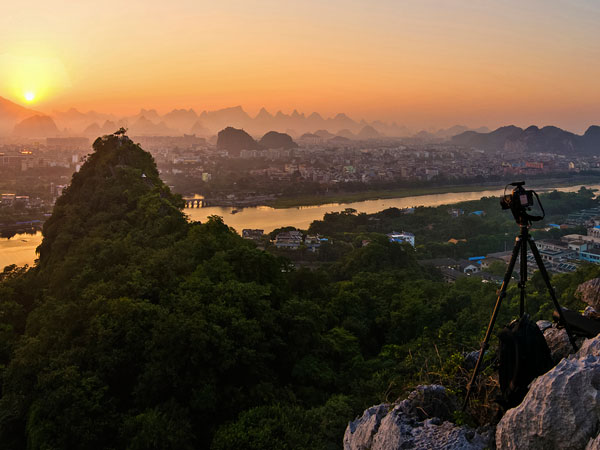 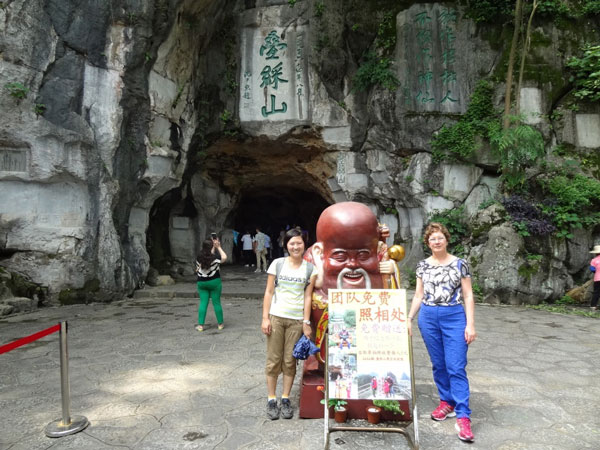 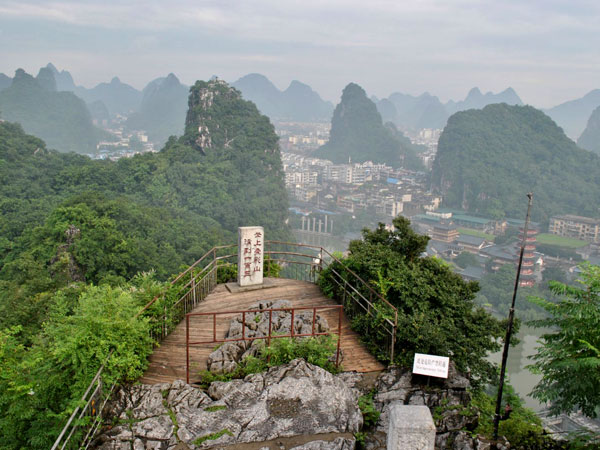 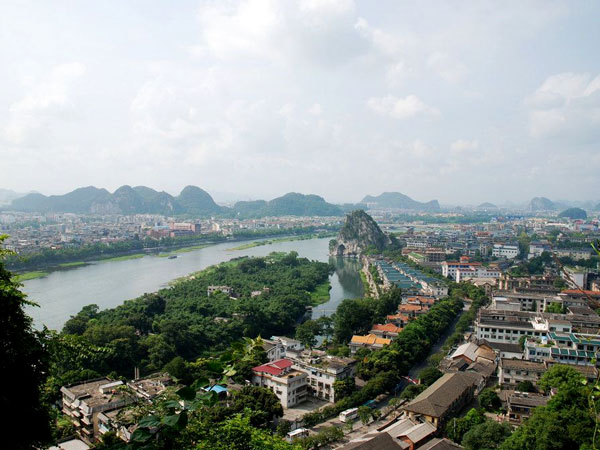 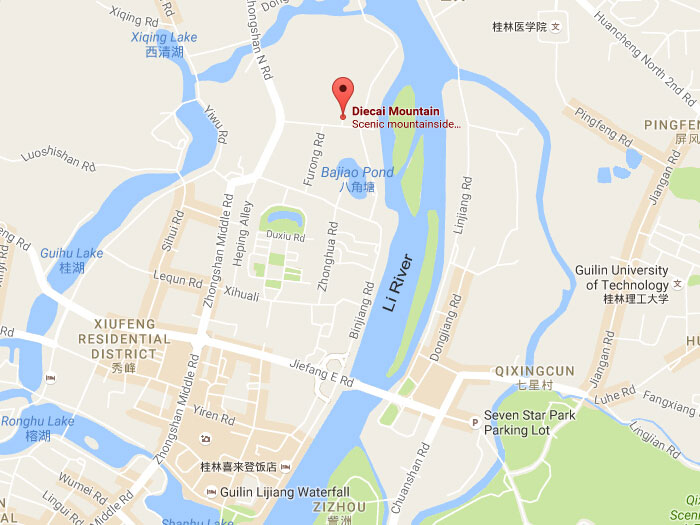 Towering over Li River's west bank, Folded Brocade Hill (Die Cai Shan) lies in the northeastern part of Guilin city. The name is derived from its queer-looking rocks, which are broken horizontally. A visual feast of magnificent scenes such as Diecai Pavilion, Wind Cave and Cloud-Catching Pavilion, along with countless stones with inscriptions created by famous Chinese scribes, awaits your eyes.

It is a hill of many names and stories. It is known as Folded Brocade Hill because of the many rock formations piled up layer upon layer. Legend says that there used to be many osmanthus trees on the hill, so it is sometimes called Osmanthus Hill. Folded Brocade Hill covers an area about 2 square kilometers in the urban area. People can climb up this hill easily. Many Chinese characters decorate the rocks along the trail leading to the hilltop.

The pavilion in Folded Brocade Hill called Diecai Pavilion Diecai Pavilion offers a charming bird's-eye view of the surrounding scenery and to the west of it there is a range of unique garden architecture in the style of the Dong, an ethnic group. From the top you can enjoy the panoramic view of Guilin’s colorful landscape and lush greenery, resembling an intricate brocade fabric. And the splendid scenery on the top of the hill will be impressive especially in the sunset.

【Folded Brocade Park Gate】
Folded Brocade Park Gate was built in 1990, and it is archaized round door that has cornice, hard ridge, slope crest, and green tiles. Our country modern famous calligrapher Wang Xiaju wrote "Folded Brocade Hill" on a horizontal tablet and hang on it, the ticket office is on the right and the left side of the walls decorated with glass window which is of primitive simplicity and elegance.

【Folded Brocade Hill Gate】
The Zhiyang Hall of Folded Brocade Hill is archaized building, stands above the location of throat of way to Shangfeng Cave; from here people can ascend the stairs. In the gate, there is banner “Folded Brocaded Hill” wrote in clerical script by Wei Jichang; on both sides there is couplet hung on the columns wrote by Zhang Xianghe and Guilin calligrapher Wu Chundao in Qing dynasty. After the entrance, that is, people will enter into the place mix with historical relics, religious resort, and natural scenery.

【Jingfeng Pavilion】
In the platform right of Wind Cave and South Cave of Folded Brocade Hill, there is a pavilion built in Tang dynasty Huichang period (841-846), past dynasties have once repaired it, but it became waste pavilion and dozens of precious poems block-printed editions were ruined in the war of Anti-Japanese. Jingfeng Pavilion was once a famous building, all previous dynasties celebrities have poems block-printed editions in here, and Constitutional Reform and Modernization famous people Kang Youwei, centenarian patriotic Ma Xianbo successively lived in here.

【Folded Brocade Palace】
Folded Brocade Palace is located between Bright Moon Peak and Yuyue Mountain, is a large landscape architecture construction group constructed on the basis of north Guangxi Dong minority building, building area of 1300 square meters, built in 1990. The central axis of Folded Brocade Palace is drum tower and the corridor; the whole building can be divided into two courtyards of east and west. Compound is center on water pool, shelf in the east, pavilion corridor in the west, building in the south, and waterside pavilion north.