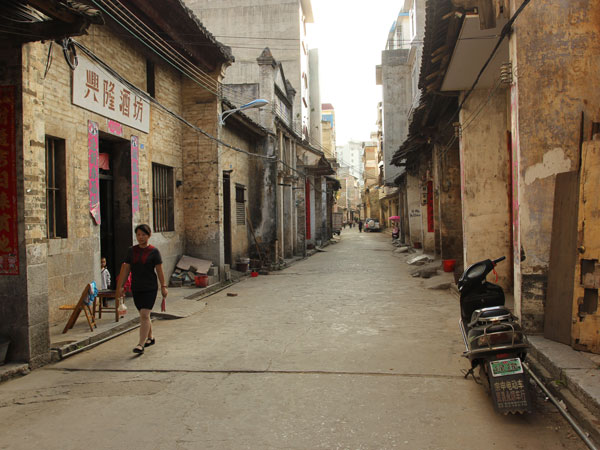 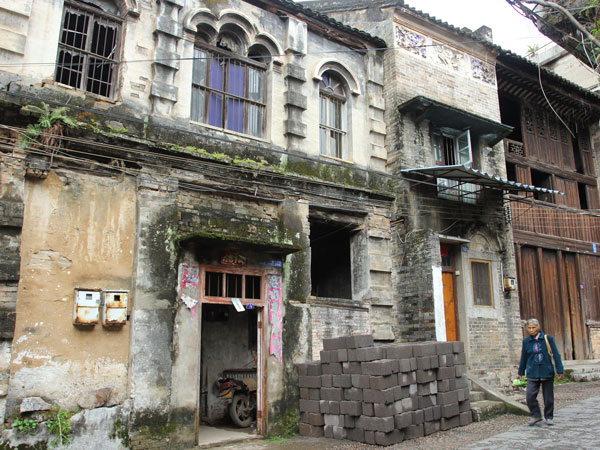 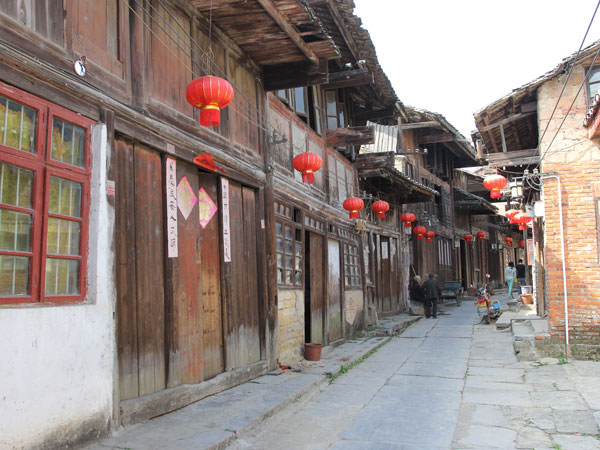 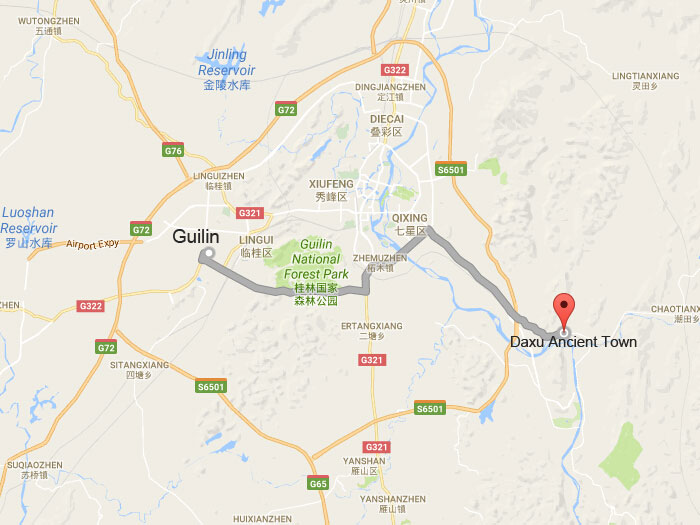 An ancient town with long history near Guilin downtown

Daxu Ancient Town is located 18km southeast of Guilin. It is at the east bank of the middle reaches of the Li River. It had been the commercial premier of the area in the Northern Song Dynasty and really flourished during the Ming and Qing Dynasties.

The cobbled streets, Wanshou Bridge (Longevity Bridge), ancient buildings and the century-old docks are worth seeing. The street measuring 2.5 km in length and 2 m in width stretches through the town. A stroll along will afford a leisurely glimpse into the traditional courtyard where granny are sometimes seen telling story to a huddle of small kids.

During Ming and Qing Dynasty, Daxu has already become a place gathered many merchants from north and south of China. Merchants from all over the place established guild hall here, like famous Cantonese Guild Hall, Hunan Guild Hall, Hiangxi Guild Hall and Mosque. By the early of the Republic of China (1912-1949), Daxu has formed eight streets, that are: Laoxu Street, Diling Street, Long’an Street, Xinglong Street, Tangfang Street, Gulou Street, Siying Street, Jianshe Street. Along the river, there are ten wharfs. At that time, Daxu was very prosperous.

What to See in Daxu Ancient Town

【Flagstone Road】
Flagstone Road of Daxu Ancient Town consist of 15000 flagstones, the houses aside the street are mostly black brick and grey tile two-floor Ming and Qing buildings. Every building has reasonable designed that it can use for business and residence. They are consisting of front door, courtyard, principal room, wing-room, and backyard. The side near street is used as shop for business, and there is stair that can reach to second floor. Going inside is courtyard, usually there is flowers and grasses which good for daylighting; behind the courtyard is principal room, tall and roomy, in it there enshrines Buddha statue and ancestor memorial tablet, and there is the place for master to receive visitors; both sides of principal room is wing-room.

Treading on the flagstone road and strolling in this ancient town, you might feel like going back to the ancient time. The houses of both sides told you one after another old stories.

【Wanshou Bridge】
Wanshou Bridge built in Ming dynasty, and rebuilt in the Qing dynasty Guangxu period (1899). It is arched stone bridge, located in the confluence of Mahe River and Li River. The body of bridge is steady and simple, and it is the key protected cultural relics of the county. The town of delicacies and traditional culture, entertainment, and folk customs also make the tourists have much enjoyment and forget to go back home. During the Dragon Boat Festival, dragon boat race is one of the traditional projects with big fair in Daxu Ancient Town, Guilin opera, dragon boat song, etc, is the traditional repertoire of people in Daxu Ancient Town. All style and customs still exist, some more endowed with new content and meaning, and they are taking the business culture and traditional culture of a microcosm.

【The Mosque】
Mosque is located in the Shengcanxia Street Daxu town. In Qianlong period fortieth year (1775), to facilitate the religious life, Muslim people raised and donated to build this mosque. After that it was repeatedly repaired, and in Guangxu period twentieth year (1904) it was reconstructed. There were three sections in the original mosque, covered an area of about 2.7 acres, due to the demolition of two parts of Nanning-Qinzhou-Yangpu railway. Now the audience hall is wooden style building, the prayer hall is in the upstairs, and bottom is hall. Behind the two sides of hall is kitchen and bathroom. The whole wooden building covers an area of 127 square meters, construction area of 190 square meters, a total construction area of more than 600 square meters of the mosque.

Wharfs materials are mostly built by laying bricks or stones. They are more than 10 meters long, about 3 meters wide, and they are all stretch into the river and emerge from the water, present rectangular platform.

How to Get to Daxu Ancient Town

1. There is 15 km from Guilin city to Daxu Ancient Town. In Guilin Bus Station, there is bus to Crown Cave, 40 minutes can get there. The earliest bus from Guilin is at 7:30 a.m., and the latest bus from Crown Cave is at 18:30 p.m. (20 minutes a bus)
2. There are buses in Sanlidian Square, where is much cheaper and closer than taking bus in bus station

It is suggested to spend 1-2 hours to visit aroud the village.