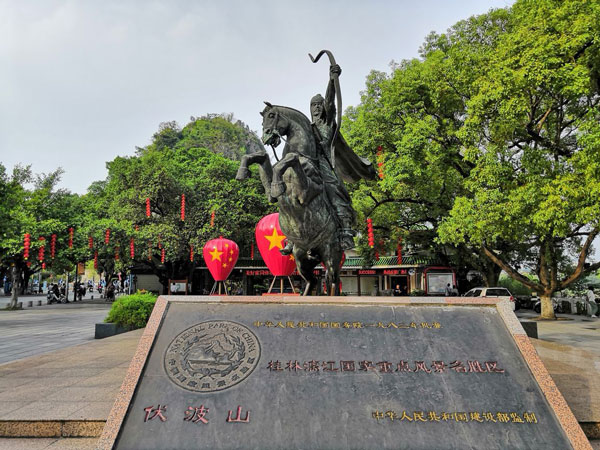 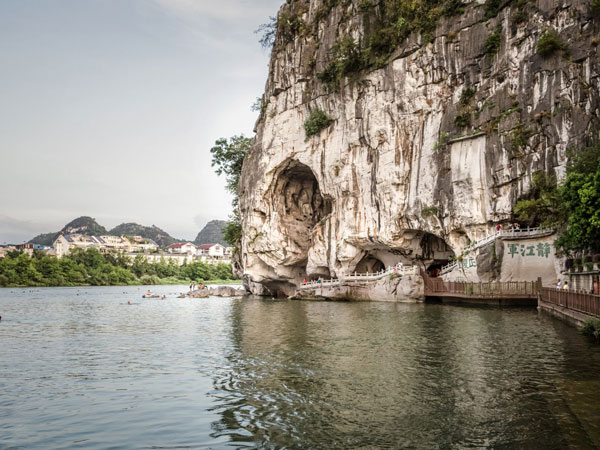 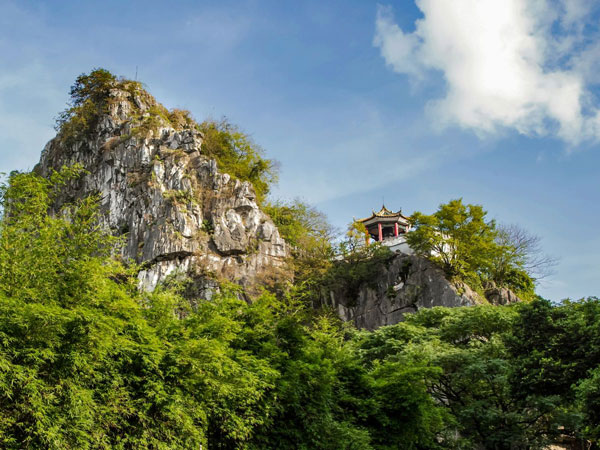 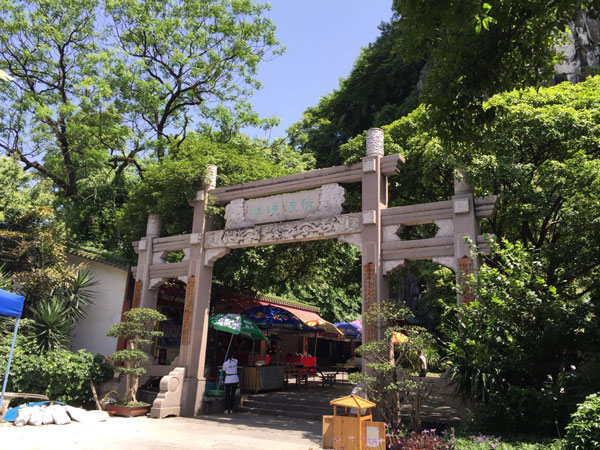 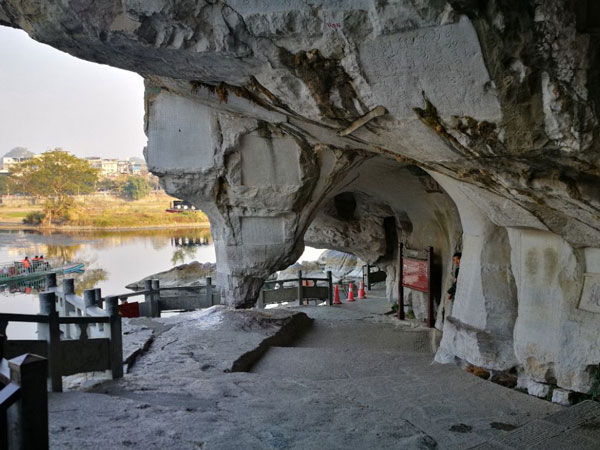 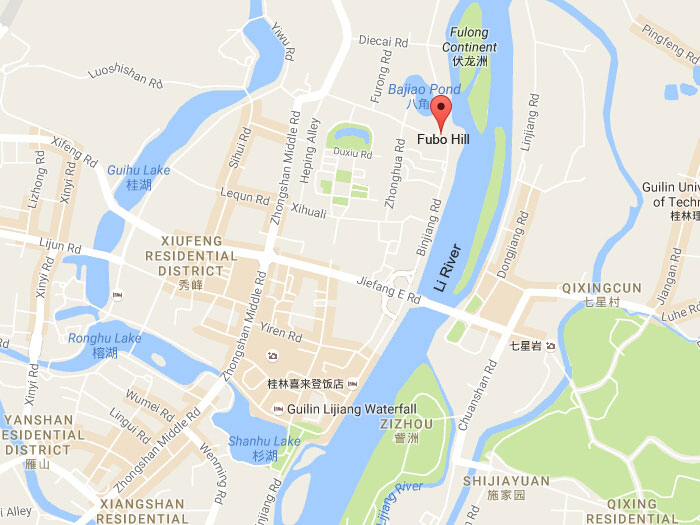 The beautiful Fubo Hill, in the northeast of the Guilin city, is well known as the "Wonderland on Wave" with its exquisite peak rising high and its foot half in water and half on land. The east of the cave curbs the river stream, causing the formation of a deep pool, so the hill is named Fubo Hill (Wave-Curbing Hill).

At the southern foot of the hill is a garden full of bamboos, palm trees and flowers, a quite and interesting place.

There is a stone path on the southern side of the hill. Half way up the hill is a Sight-Seeing Terrace from which you can see the Old Man Hill northwest to it, resembling an old man in the hood looking up to the south. It is so life-like that you can even distinguish his brow and beard. The way from the Sight-Seeing Terrace to the summit of the hill can be compared with the way to the West Peak in the Hua Mountain. It is narrow and steep. Only the brave ones dare to scale the heights and find the climbing interesting.

At the foot of the hill is the famous Pearl-Returning Cave, which is composed of many side-caves, linked like a labyrinth. A several-meter stalactite column, thick on top and tapering downwards, hangs all the way from the ceiling the ground. It is so strange that no visitors will see it without amazement. Since the space between the column and the ground seems to be the result of a sword cut it is named Sword Testing Stone. The step beside the Sword Testing Stone wind their way up to the Thousand Buddha Cave, in which are more than 200 Buddha statues made in the Tang Dynasty.

Fubo Hill is located in the edge of the Li River, the mountain half lying in the water. When in Tang dynasty Fubo General Temple was built on the hill. Inside Fubo Mountian, park pavilions is ready that it is a rare comprehensive tourist attraction. Now there is Guishui pavilion, Tingtao Pavilion (Listening to Wave Pavilion), Sword Testing Stone, Thousand-Buddha rock and other places of interest, and in front of the corridor there is set up pavilion.

【Fubo Winding Corridor】
Fubo corridor is in Fubo hill second level platform, and is "U" shape veranda architecture form which form a two-stage platform in a slope that in front of Fubo mountain, in order to make the two in harmony for an organic whole. Along the southeast edge of veranda, it naturally formed a yard with the retaining wall on the north side of the platform. Inside the courtyard there were planting flowers and trees. Along the corridor downstairs and climb up to third floors platform, platform, tea house and yard is connecting with each other.

【Pearl-Returning Cave】
Pearl-Returning Cave is located in the mountainside of Fubo Mountain, in ancient times there was only one entrance of cave in the side of the river, if people who want to enter need to take boat there. Then people digged two entrances in the west and the south, so that can walk from land into the cave. The cave is 4 meters to 6 meters tall, 6 to 8 meters wide, total length of 120 meters, covers an area of more than 600 square meters.

The most precious relic is the self-portrait of Mifu carved on the rock, one of the four great calligraphers of the northern Song dynasty, which is 1.2 meters high. It is worth mentioning that Mifu was the first to draw Guilin landscape.


How to Get to Fubo Hill