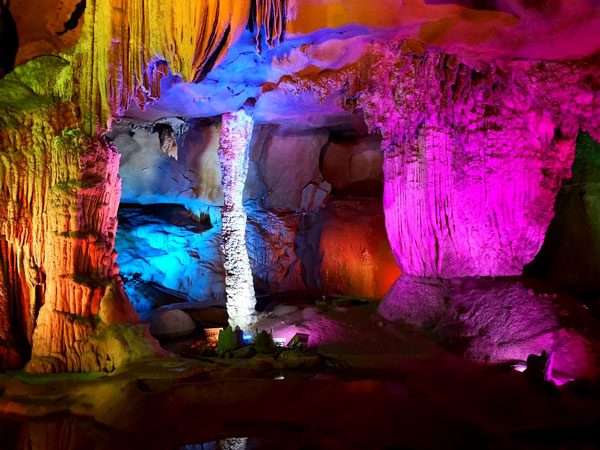 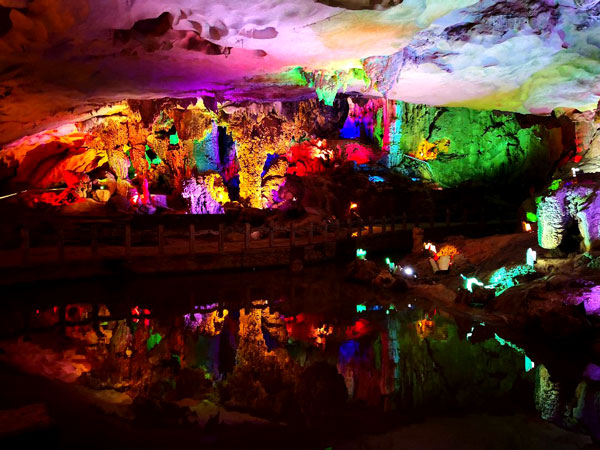 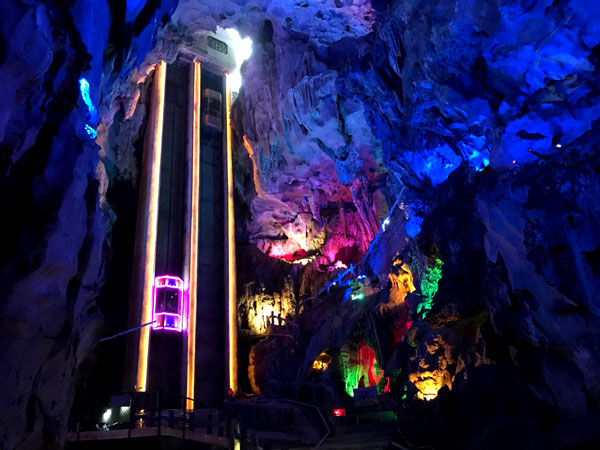 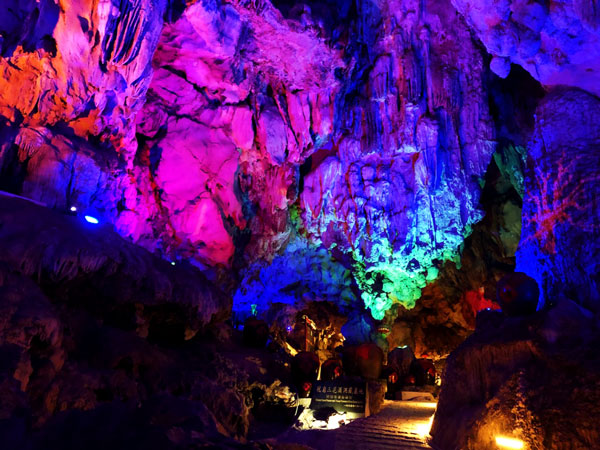 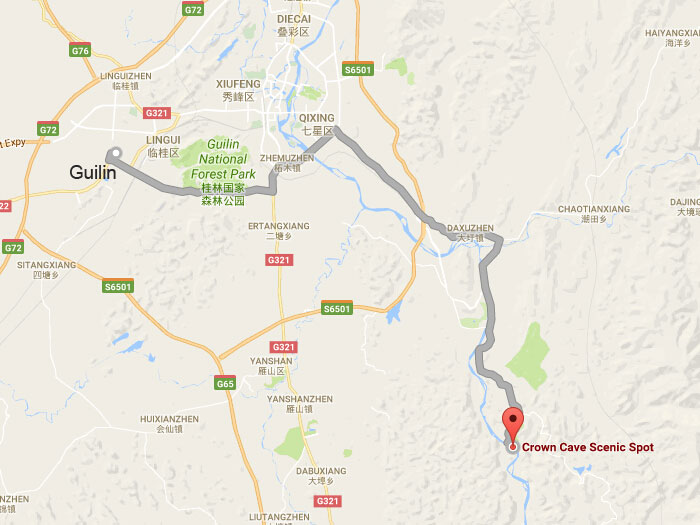 A famous underground karst caves along the Li River


Guilin Crown Cave is a magnificent karst cave in Caoping Hui Nationality village about 29 km from Guilin. It is a part of Crown Mountain. The Crown Cave scenic area covers an area about 4000 hectares. Integrating natural scenes, meeting and holiday facilities, accommodation and dining service into one, the Crown Cave is reputed as “Li River Pearl”.
The overall length of Crown Cave is 12 km (7.5 miles). The 3 km (nearly 1.9 miles) near Li River has been developed and opened to the public. Stalagmites and stalactites are illuminated by an interior lighting system. The cave has been fitted with a sightseeing elevator, small trains and a kind of roller coaster designed for sightseeing. You can also take a small boat in some parts of the cave.
There is a sentence describing Crown Mountain as following “Cruising to the Weimu Mountain and then seeing the shining crown”. The crown here is referred to the Crown Mountain. The entrance of this crown cave is the exit of the underground river. The cool river always runs from this cave all year around,
The best way to do sightseeing in Crown Cave is by boat or bamboo raft. To the first cave, a 10-meter-high cave with stalactites. And then, tourists will cruise into the second cave, during the rainy season, this cave may be immersed by water. The entrance of the third cave is lower than the second one. While the forth one is easily to come.

Xu Xiake was attracted thousands years ago in 1637, becoming the first famous people to explore the Crown Cave. In "Travels of Xu Xiake" detailing the Crown Cave and the name of Crown Cave gained its name because of Xu Xiake. Tang dynasty Mo Xiufu wrote "Guilin Local Condition Notes" recorded the Crown Cave. On November 12, 1985, the Sino-British joint group's expedition diving caving together, confirmed that the Crown Cave with water came from Nanxu River branch entrance of Lingcuan County. In 1995, Crown Cave was officially opened.

【Underground River Scenic Spot】
Crown Cave is capacious, like a palace, and it is pervious to light front and back, so also called "light cave". Rock inside can be divided into three layers of five holes, piled up layer upon layer; the holes are linked together, rugged twists and turns. The above two layers are dry holes, and there are hanging stalactites of different shapes, about 3 kilometers long. The lowest layer is underground river, about 700 meters long.
Crown Cave Underground River Area is one of the famous tourist caves in Guilin, in the early ninety’s of this century, Crown Cave was carried on the comprehensive development scientifically, according to high standard to design and set up a variety of sightseeing ways, in a total of five ways: walking (about 1000 meters); sightseeing slide (slide back and forth in the cave about 500 meters); sightseeing elevator (sightseeing elevator about 36 meters high, Asia the first ladder); tramcar inside cave (the tramcar is about 30 meters long, can accommodate 108 people, and the whole tour is about 500 meters); taking small wooden boat in the underground river (12 per passenger a boat, the tour distance is about 700 meters. In the cave there is the first cave waterfall, underground river fall). A variety of modern tourist facilities and inner scenery of the cave make Crown Cave became unique cave in the domestic.
【Xiangba Island】
Traditional, modern, avant-garde artistic work combined with the natural landscape, reflects the multifaceted charm, this is the only island paradise in Li River – Xiangba Island landscape art garden. About 500 meters down the Crown Cave of the Lijiang River there is a magical and beautiful island, named Xiangba Island. Island covers an area of five hundred mu, forest coverage rate of 80% above, there are more than hundred acres of forest, large grapefruit forest, peach forest, and dotted with the original bushes. On the island of spring and summer, the trees are lush, flowers are in full bloom; during autumn and winter seasons, full tree of red leaves make the entire island become a red world. And there is pond, clear stream in the island, no industrial pollution. It is a real natural world.
Xiangba Island is located in the most prime location of Li River scenic spots, formerly known as Langzhou Island (in Travels of Xu Xiake called Lanzhou). The name of the Langzhou originated from Song dynasty, because it is surrounded by water, born in waves. The island roughly divided into ethnic customs performance area, landscape art area, dining area, tent area, sketch production area, etc. Island surrounded by the beautiful and magical eight wonders of middle section of Li River: Embroidered Rock, Legend of Langzhou, Donkey Hanging Wall, the Land of Peach Bloom Secret Cave, etc.
In August 2000, the "the Humanities Landscape · People and Things" were organizing hundreds of artists to create art works on the island and the works that those artists created was built as the first Chinese landscape art park - Xiangba Island landscape garden. Xiangba Island is a island with natural scenery, folk customs as the main body, so with tile ceramic art sculpture as the theme that it collects landscape, ethnic construction, characteristic catering, performance, and process of production as a whole. It is sightseeing, leisure landscape garden art.
【Sightseeing Slides】
Crown Cave Scenic Area covers an area of 5000 mu, there is diverse and concentrated landscape, the beautiful nature attracts millions of tourists from home and abroad to visit with an endless stream since it opened. In order to solve the travel fatigue of tourists, at the end of 1999 Crown Cave Scenic Area built the first domestic electric sightseeing slide, so that it is easier for visitors to appreciate the natural beauty of the Crown Cave Scenic Spot and can experience the fun of sliding that touching close to ground.
Crown Cave Scenic Spot electric sightseeing side slide is designed by using the latest technology at home and abroad, which is a domestic initiate. Electric sightseeing slide rail tube section is the arc structure, smooth and natural, the building occupy a less floor space which belong to environmental protection high-tech project; Rely on 45 volts dc drive vehicle, electric sightseeing slide can climb slope and make a turn that is safe and reliable. Crown Cave Scenic Spot electric sightseeing slide is 3.2 km long, the speed can be up to 15 m/s, and visitors will be able to control the speed. And it is easy to operate that is an extremely interesting sightseeing tourism project. Electric sightseeing slide formally opened to the public on June 28, 2000 and it was evaluated as the longest sightseeing slide by the Shanghai great world Guinness headquarters.
【Cloud and Mist Mountain Villa】
Cloud and Mist Mountain Villa is the only resort hotel that it collects modernization and countryside as one in the Hundreds Miles Li River. The biggest characteristic of the mountain villa is that it has beautiful environment, fresh air, the outdoor swimming pool and barbecue places.
【Xiaoheli】
Xiaoheli is a natural small basin 1000 meters long and 500 meters wide, which runs through Crown Cave underground river on the bottom. Xiaoheli is located in the heart of Crown Cave and adjacent to Crown Cave underground river scenic spot.
There is viewing platform and cable car in Xiaoheli, reach the peak and you can have a panoramic view of Li River, rural cottage, countryside scenery. The overlapping and buildings strewn at random and painted a meaningful human life picture scroll with artistic conception.

【Recommended Visiting Time】one and a half hour
【How to get to Crown Cave】 taking Crown Cave Special Line from Guilin Bus Station, the earliest bus departs at 7:30 from Guilin, and latest bus departs at 17:00 from Crown Cave
【The best time to travel Crown Cave】The best season to travel Crown Cave is from April to October every year, and during this period, there is “May 1st” and “October 1st” two golden vacation weeks which is also the peak season of travel. At that time, Guilin with suitable weather will meet a lot of tourists, so the hotel reservation and transportation will be in its climax, the price will be higher than ordinary times.