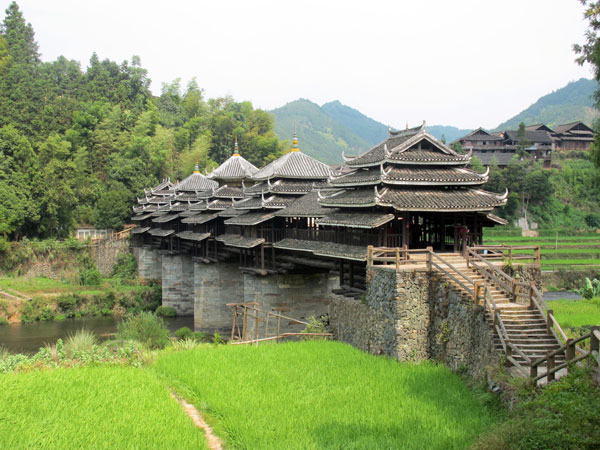 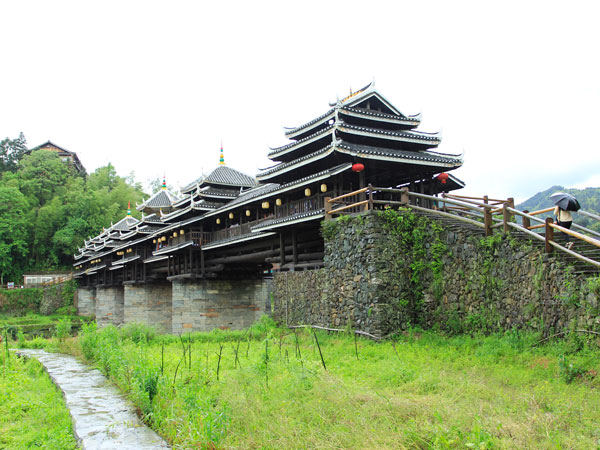 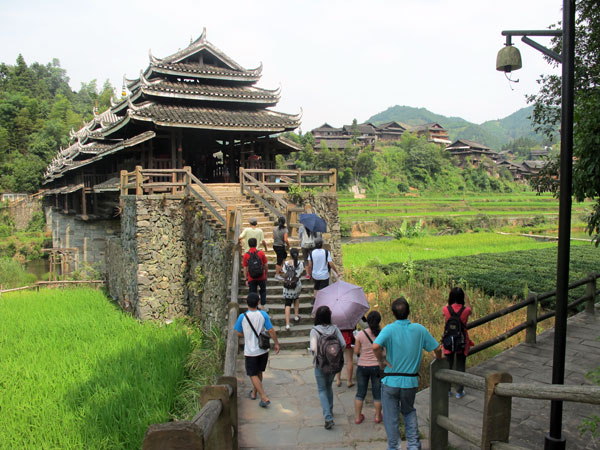 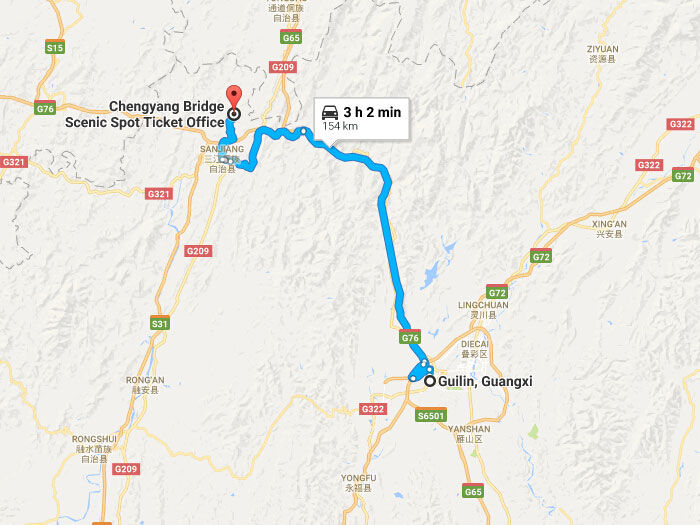 A typical architecture of Dong minority; a good site to see customs of Chinese Ethnic


Chengyang Wind and Rain Bridge can be taken as a symbol of the Dong ethnic architecture. It also can be called Yongji Bridge or Panlong Bridge and takes a very important position in the Chinese architectural culture. Main materials used to build it are wood and stone. With a history about 100 years, Chengyang Wind and Rain Bridge still keeps a complete appearance for people to study the Dong minority culture.
With a reputation as the largest wind and rain bridge and one of the most magnificent wooden architectural structures, the bridge has it unique structure. The most amazing thing in the construction of this bridge is that no single nail was used in the building of the whole bridge. Fir and wood board cover the surface of the bridge. The bridge is a perfect combination of painting, bridge, corridor, veranda and Chinese pavilion. It has two platforms (at the two ends of the bridge), 3 piers, and 4 spans, 5 pavilions, 19 verandas, and three floors. The piers are made of stone, the upper structures are mainly wooden, and the roofs are covered with tiles.
Built in 1916, the bridge is 64.4 meters long, 3.4 meters wide and 10.6 meters high. Bound together by mortise and tenon construction it stretches across the Linxi River. Both the sides of the bridge are inlayed with railing, so the whole bridge looks like a long corridor. Also, there are 5 tower-like kiosks with many horns in the bridge. Long stools were set up on both sides of the bridge for people to rest. From the stools where people sat you could see the Linxi River windingly flowing happily. On both sides of the river it was full of tea forest and green woods on the sloping hills. Also you could see that the peasants were working in the plantations. There is also a reservoir on one side of the river.

Chengyang Wind and Rain Bridge, this kind of architecture that do not use nail and rivet condensed the Dong people's wisdom and sweat, also condenses the moving of legend conjugal love couples who were rescued by flower dragon. Every bridge represents its past and future; and the flowing water or cicada chirp can let you deeply immersed in the chill from the beautiful.
Chengyang, picturesque scenery of Dong county, hand down a legend that flower dragon saved a young couple: one day, a pair of newly married loving young couple walking over the bridge, the river bottom suddenly blowed up a gust of wind and rolled the girl. It turned out to be a river crab like the girl and cause trouble. Her husband was crying on the river, almost want to drown himself in the river to accompany his wife ...His crying disturbed the flower dragon in the bottom, and the dragon was deeply moved by spoony so it flied up and defeated the crab and rescued the girl.
The couple finally reunited. Then later generation in order to commemorate flower dragon they reconstructed the wooden bridge as gallery-type Wind and Rain Bridge, also carved the image of flower dragon in the column, and called it Huilong Bridge (Dragon Bridge). Because this bridge can make people avoid wind and rain, so people renamed it as Wind and Rain Bridge.
Later, the Wind and RainBridge is a good place for lovers to date secretly. Accompanied by the sound of water, sitting on the bridge side by side and looking at the sky is a kind of romance for Dong minority young men and women.

Special and exquisite Wind and Rain Bridge, majestic tall Drum Tower, different style residence, reflected the green mountains and water and formed the picture scroll of the beautiful scene. Chengyang not only famous for Wind and Rain Bridge at home and abroad, also the scenery is concentrated the essence of the Dong culture. On the hillside of Chengyang Bridge, people can see large water wheel turn slowly; Dong stilted building is near the mountain and by the river, row upon row of buildings gathered together as one piece, layer upon layer, it is no wonder that some foreigners who understand the true meaning of cultural tourism came to Chengyang and often stayed here for three to five days, some even stayed ten days and for a month to observe the and experience the slowly life custom of Dong people, and to explore the existence of Dong folk culture.

How to Get to Chengyang Wind and Rain Bridge 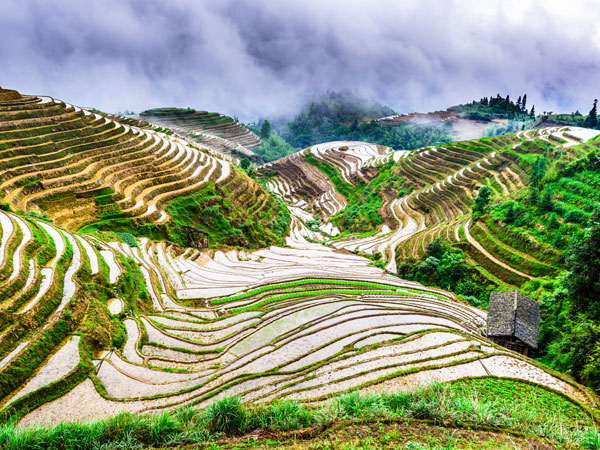 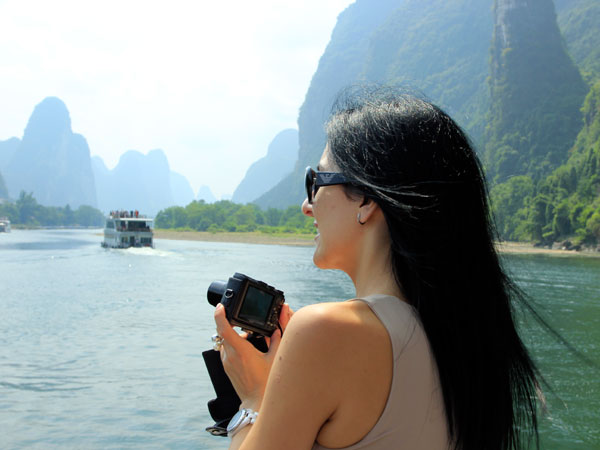