The “Love story” show is large a live performance being staged against the backdrop of real hills and waters. The show combines of dance, music and folk customs and is performed by many boys and girls of Dong minority in the Dong County’s Bird Nest Theatre. The show is original and spectacular with ancient reproduction 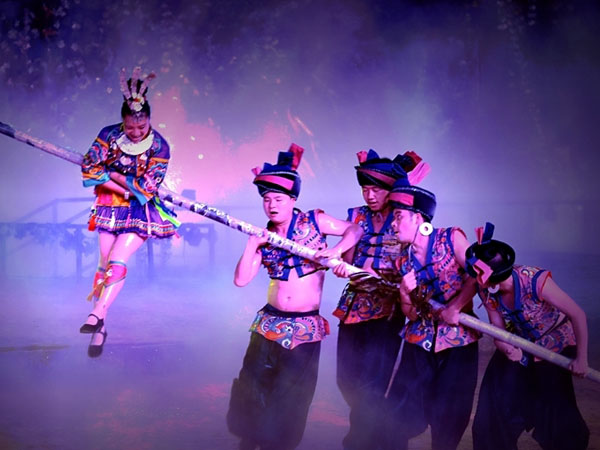 "Love Story”, or known as Zuo Mei in Chinese Pingyin, is a traditional way of loving for the young people of Dong minority in Sanjiang area near to Guilin, Guangxi Province, China, which contains folkway of primitive simplicity, but interesting and colorful. They liked to adorn the happy days with sweet songs, and use a rich lovely chat to start their happy temperament. Their songs were filled in the public square besides the drum tower; Their charming words were running below the Wind and Rain Bridge; Their feelings was to enrich the intriguing story and thoughts stored in wonderful hope for them.

The show is composed of introductory performance, Scene one, Scene two, Scene three, Scene four and the end. The show tells the love story from their first date to get married finally. Singing folk songs are the common way for showing their love to each other. The colorful performance combines traditional cultural elements of Dong Minority, such as the marriage culture in Dong areas, clothing culture of local ethnic minority and song culture, with the country's top modern choreography and sound and light technologies, such as the country's largest and most complex video and LED ladder 1000 Tech fixtures combining to make the performance modern and dynamic. 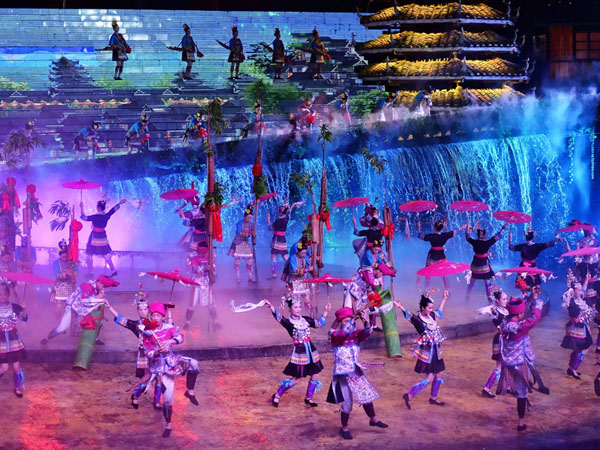 Dong County’s Bird Nest Theatre is recorded into the Guinness World as a wooden architecture. Bird Nest Theatre was founded on June 18, 2009, covering an area of 6,000 square meters. It is shapes cylindrical type, with 88 meters in diameter and 25 meters high. The main structures are made of wood, without a nail or line, but impregnable and magnificent. Just because of this, the nest was listed into Shanghai Guinness World Records in 2010. The entrance and passage of it is decorated by 6816 bamboos and rows of hanging bird cage lighting with chirp sounds. when you enter this unique bamboo door, you will feel like walking into a bamboo forests with nice and beautiful all kinds of chirps. It is divided into three layers inside the builing: The first layer is used for dining and entertainment; the second layer is a large-scale live stage for China's first performances in Dong ethnic style; the third layer is the world's longest painting gallery of farmers.