►In the daytime, fisherman encloses fishes by casting a net first, and then let the cormorants dive into the water to catch fishes.

►Just follow the cormorants downstream along Li River for fishing

► Stay at a pool of Li River, just let cormorant to fish for them.

► The 4th one is the most interesting and attractive one. As night is coming on, they went on their bamboo rafts in group with torches on the bow of the raft, shouting to attract the fish school into their encirclement. Then the trained cormorant jumped into the river to catch the fish. With the development, the torch is replaced by gas lamp. 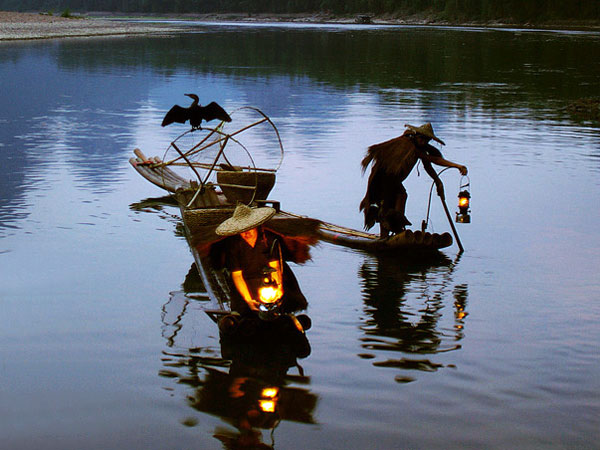 Since the fishes in the river become less and less due to the increasing human activities and fishermen’s life style is changed, it is hard to see such kind of fishing scene in Guilin and Yangshuo. Even though the traditional fishing scene cannot be seen on Li River, cormorant fishing walks into people’s view as a tourism performance. Although it is not as original as before, the performance could also show this traditional way of fishing to people. It is still popular.

How does a cormorant to catch fish for fisherman?

Cormorants are so good at diving that they can go under water for quite a long time. Upon the order form the fisherman, the well-trained cormorants will dive into water to find fish and catch them. When they succeed in getting any fish, they will proudly swim back to the raft and show off to the fish man. The fish man usually award one or two very small fish to encourage them. Of course, the birds also swallow the small fish they catch. Sometimes they do get big carps that weigh 3-4 pounds. With the straw or rope tied around their necks, they would not swallow the big fish they catch. To some extent, this is quite cruel and unfair to the birds. The poor but interesting birds work for man, not for themselves. 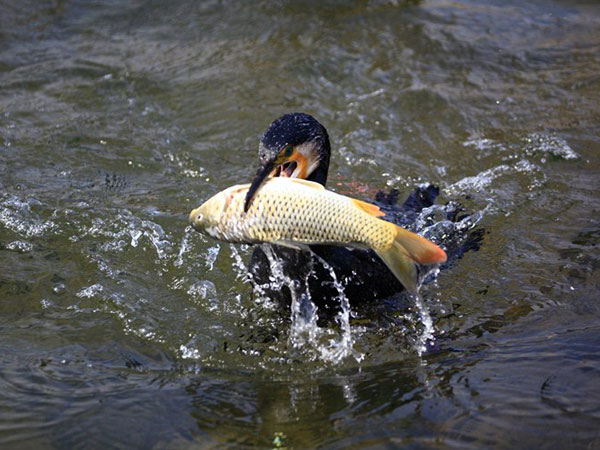 Where can we see cormorant fishing performance when we travel to Guilin?

2. Guihu Lake
Note: this one is included in Four Lake Night Cruise