What is Two Rivers and Four Lakes? It refer the famous sightseeing round-city waterway system in the downtown of Guilin. It connects Li River, Taohua River, Shanhu Lake, Ronghu Lake, Guihu Lake as well as Mulonghu Lake. It is also the largest environmental project in Guilin’s history. Nowadays as Two Rivers and Four Lakes Cruise tour connected the most beautiful scenic areas, it has already become an unmissable activity for domestic or overseas tourists.

History of Two Rivers and Four Lakes Round-city Waterway System
In Tang Dynasty, “Four Lakes” was regarded as the moat of Guilin. The moat was extended to Taohua River in Ming Dynasty. From then on the moat in Tang Dynasty become connected lakes. Tour and Recreation on water had been very much in a fashion in the Tang and Song Dynasty. However, many lakes disappear in the long history. Guilin municipal government decided to start round-city waterway system project to represent the ancient prosperous city of water in Guilin. This idea was proposed in 1998 and the project starts to build in 1999. Finally, it came into public in 2002. 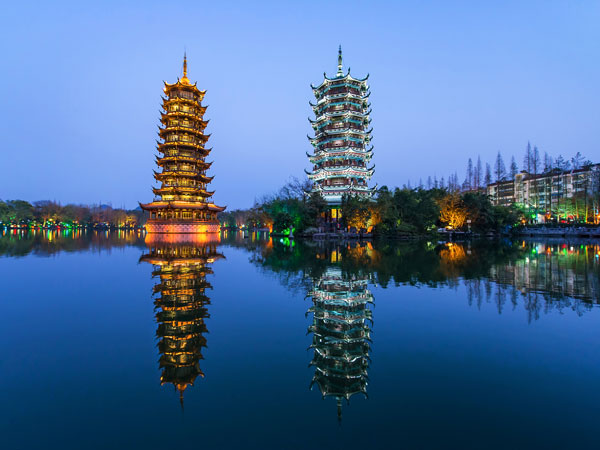 Two Rivers and Four Lakes Cruise during the day

It is not only a tourism project, but also a large municipal infrastructure construction and a environmental projection. It perfectly improves the ecological environment of Guilin by the roots. Meanwhile, it is helpful to provide more comfortable life to citizens. Take a a cruise, tourists could visit three characteristic scenery areas. Ronghu and Shanhu Lake presents the traditional Chinese gardens, Guihu Lake shows the ecological landscape and Mulonghu Lake is a Song Dynasty Cultural Park. Tourists could see famous hills on the cruise boat, such as Elephant Trunk Hill, Fubo Hill, Brocade Folded Hill, ect.

Highlights on the Cruise

►Ronghu Lalke and Shanhu Lake
Ronghu Lake and Shanghu Lake are connected lakes in the center of Guilin. They are separated by Yangqiao Bridge. The east part is called Shanhu Lake; the West part is called Ronghu Lake. Rong refer to banyan tree in Chinese and Shan refers to cedar tree in Chinese. They get the names because there are many banyan trees and cedar trees on the bank of both lakes. The new landmark of Guilin is just in Shanhu Lake, which is Sun and Moon Towers. The Sun Tower is made of bronze in the center of Shanhu Lake with 41 meters height and 9 stories. . It is regarded as the highest bronze tower in the world. 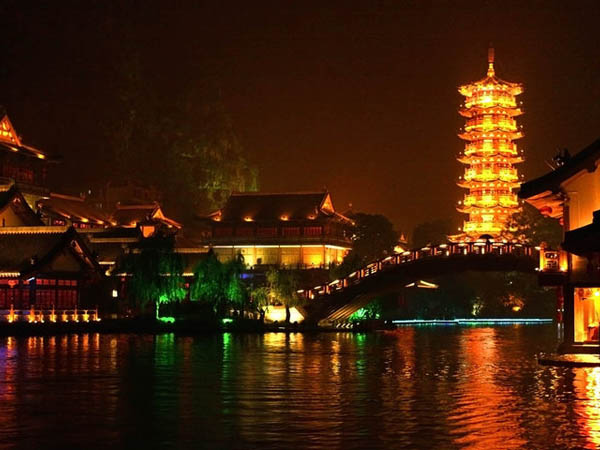 ►Guihu Lake
The West moat of Song Dynasty is over Guihu Lake which is around 1700 meters and 110 meters wide. Guihu Lake was a very important part of Guilin moat in the history. You could find many rare trees, such as banyan tree, gingko tree, cedar tree, lily magnolia. With fine designed landscape as well as the view of Laoren Hill, tourists could feel comfort and peace of Guilin.

►Mulonghu Lake
Mulonghu Lake is man-made lake, blending of the natural sightseeing and history & culture. Depending on the Dongzhen Gate and the ruin of city wall in Song Dynasty, it is built including Song Street, imitated Song City, Mulong Tower.