Inside the Beijing Forbidden City, there are numerous ancient buildings, among which, the most attractive buildings are the three main halls : the Hall of Preserving Harmony (Baohe Hall), the Hall of Central Harmony (Zhonghe Hall) and the Hall of Supreme Harmony (Taihe Hall). 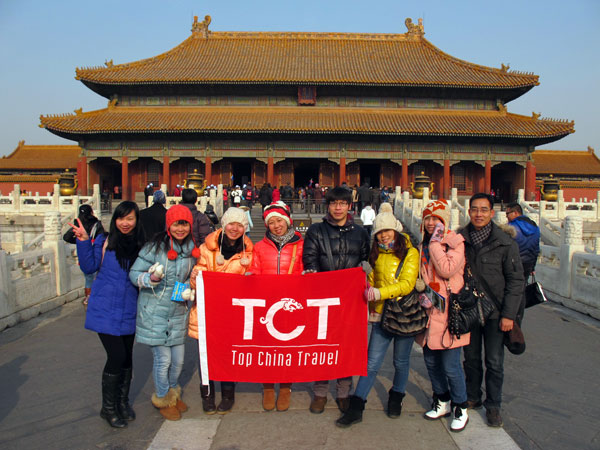 The Hall of Preserving Harmony, located behind the Hall of Central Harmony, was first built in 1420 and first named " Jinshen Hall". It was renamed " Baohe Hall" in Qing Shunzhi 2 Year, which means the single-minded consciousness and maintaining the harmony to get the happiness, longevity and peace for the country. The hall was once the place for the emperor to confer titles of nobility on the queen and the prince in the Ming Dynasty, also the living place for the Qing Emperor Shunzhi and Emperor Kangxi, the place for holding the feudal imperial examination in Qing Emperor Qianlong period. It has the construction area of 1240 square meters, the height of 29.5 meters. It has double eaves and gablet roof; is covered with yellow glazed tiles. Its inner and outer eaves are both decorated with golden dragon patterns; its ceiling is embossed colour painting which is to coordinate with the deep red furnishings and appears luxury and wealthy. 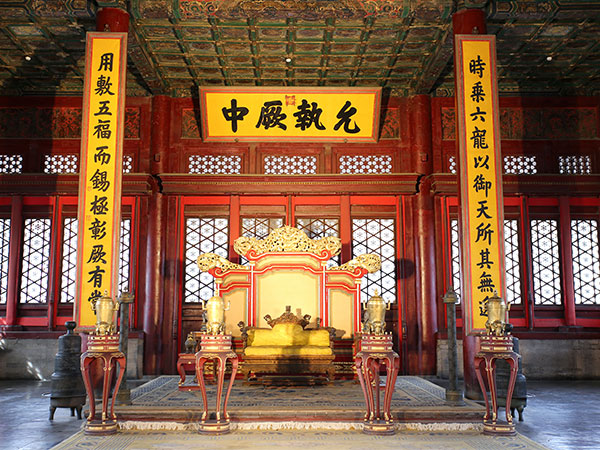 The Hall of Central Harmony, located between the Hall of Supreme Harmony and the Hall of Preserving Harmony, was the place for the emperor to take a rest before holding grand ceremony and accepting officials' worship in the Hall of Supreme Harmony. While holding a memorial ceremony for the heaven and earth, the emperor would review the congratulatory message the day before; also would check the seed and farm implements before the altar of the god of agriculture. Central Harmony means ‘everything should be finished in a perfect way so that the harmony comes into being'. The hall is paved by gold bricks and covers an area of structure of 580 m². Its roof has four sharp angles covered by yellow glazed tiles. Each sides of the palace. All the four sides have stepstone with cloud and dragon embossment imperial road. Both sides of the gate have black brick and sill wall. The outer and inner eaves are both decorated with golden dragon patterns. A land screen throne is located in the middle of the hall. 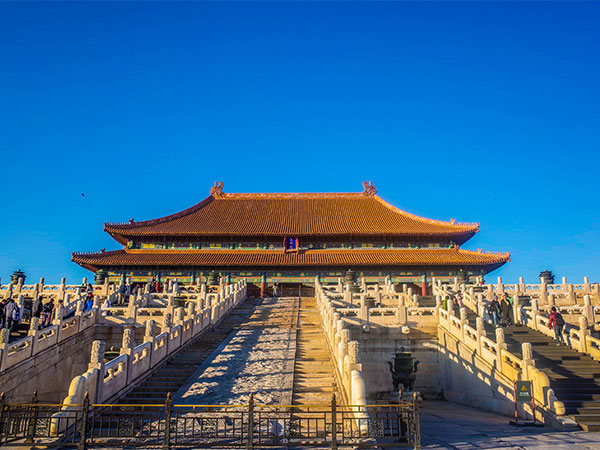 The Hall of Supreme Harmony, also known as the Hall of Golden Chime, is China's existing largest wood wood structure palace. It is located in a powerful and influential position of the north-south main axis in the Forbidden City. It was first built in 1420 and through many times destroy by fire and rebuilt. It was used to hold grand ceremony by the 24 emperors in Ming and Qing dynasties, such as the enthronization of the emperor, the wedding of the emperor, crown empress, etc. The high building regulation and perfect decoration method of this hall can be said to be the top in Chinese ancient buildings. It is decorated with 10 carved beasts which is the most and unique in Chinese palace architectural history, showing its sovereign and important position.