Things to Do at Night in Beijing

There are many interesting things for you to do at night in Beijing. Here TCT offers some info about what to do in Beijing at night, including night shows to watch, shopping, where to have fun at bar street, where to watch beautiful night view, etc.

Watching Chinese Kungfu show will be a breathtaking experience and unforgettable memory of you Beijing tour. Shaolin Kungfu with its international fame will be performed by many artistes here to tell you what is the strong spirit melted in Chinese souls. Kung Fu is a commonly used term for all the martial arts styles in China. Perhaps more than any other practitioner, Bruce Lee opened the eyes of the Western world to the fascinating practices of Chinese martial arts, now the worldwide followers of the various related disciplines number in the millions. Chinese Kungfu show is performed in Red Theatre every day. You should book tickets in advance through local travel agent or by yourself. 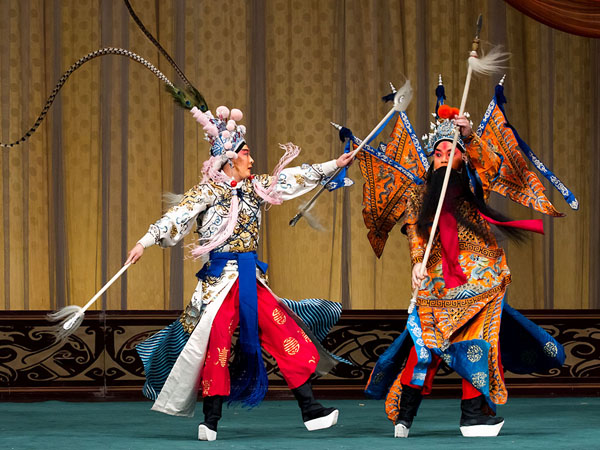 Peking Opera is a traditional style of Chinese theatre performance that combines music, vocal performance, mime, dance and particle acrobatics. It is regarded as the quintessence of Chinese culture. It enjoyed its greatest popularity beginning some two hundred years ago and was extremely popular in the Qing Dynasty court where it came to be regarded as one of the cultural treasures of China. Beijing opera features four main types of performers; with their elaborate and colorful costumes, performers are the only focal points on Beijing opera's characteristically sparse stage. Popular theatre to watch Peking Opera is at Li Yuan Theater, Zheng Yici Opera Theatre, Hu Guang Hui Guan Opera Theatre, Mei Lan Fang Grand Theatre and Chang'an Grand Opera House. You may pick a nearest place to your hotel to enjoy this classic performance. 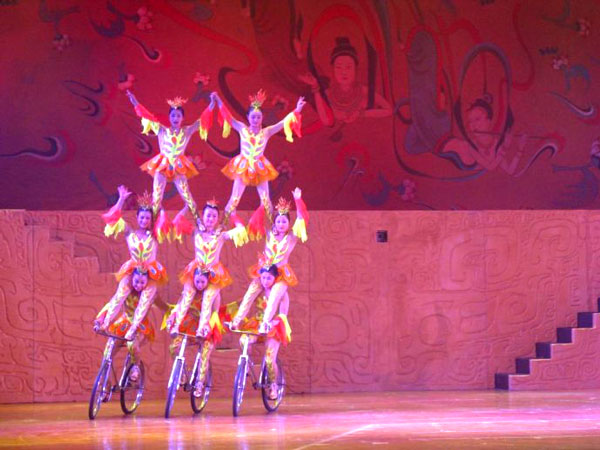 Acrobatic is the performance of extraordinary feats of balance, agility and motor coordination. It can be found in many of the performing arts, and in many sports. In China, acrobatics have been a part of the culture since the Western Han Dynasty, over 2,500 years ago. Acrobatics is now an important part of modern Chinese variety art, where items include the universally recognized Lion Dance, oral stunts, pagoda of bowls, juggling, wire walking etc. Unlike western magicians, whose props are part of a stage set, and employ smoke, mirrors, electronics and lighting effects, a Chinese acrobatic conjurer has to carry these items upon their person throughout their act, concealed beneath a loose gown till the climactic moment when they produce them to a stunned audience.

Popular places to watch Acrobatic Show include Chaoyang Theatre, Tiandi Theatre, Cultural City of Beijing's Night. Among them, Chaoyang Theatre is the most famous one. You’d better book tickets in advance, or it may be sold if you purchase in spot.

Go Shopping at Night in Beijing

As one of the largest and most bustling city in the country, Beijing has a lot of shopping malls, commercial areas and shopping streets. 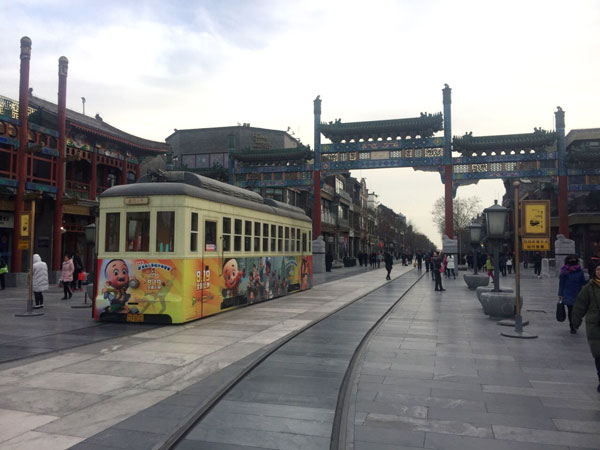 Wangfujing Commercial Street, a 700-year-old commercial street in Beijing, has maintained its position as the number one choice for shoppers since the mid-1980s. It has long been acknowledged as the largest, most fashionable one-stop shopping center in Beijing. It is filled with large shops, hotels, specialty shops and its illustrious old-time Beijing shops. It has a total length of about 1.5 kilometers, running North/South between Wangfujing Nankou and the Sun Dong An Plaza. At night, when Wangfujing Street turns on its ever increasing number of neon advertising signs, even more crowds flock to soak up the atmosphere. The neon can now be compared to those of any major city in the world and are very popular with the tourists, especially those coming from less developed parts of China. Most shops stay open till around 9pm and sometimes there will be an impromptu night market. 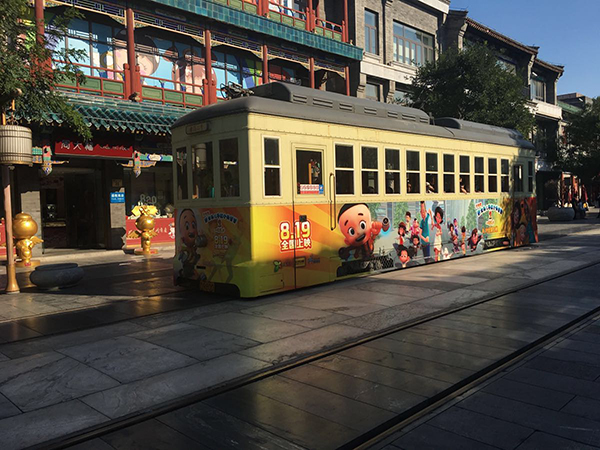 Xiushui Street (Silk Street), the Leading Foreign Trade Market, attracts domestic as well as foreign tourists with commodities at a cheap price. No matter you want to buy the good only belongs to China or popularizes in the world, this market can meet you need with variety commodities, including curtains, tablecloths, bedding, earrings, and watches as well as clothes, inexpensive caps, and shoes of excellent workmanship. If you want to buy something, you should check with more than one store and haggle over the price.

Xidan Commercial District, known as one of the three most famous commercial centers in Beijing together with Wangfujing Dajie and Qianmen Da Zha Lan, is a modern, international, commercial site for shopping, dining, recreation and culture. It is called 'the second Wangfujing' in Beijing. Starting from Xuanwu Gate in the south; the commercial street is 5.4 kilometers long. The central area is Xidan Cultural Square, the largest venue for cultural entertainment along Chang'an Street, composed of underground restaurants, markets, cinema, bowling alley, swimming pool, rock-climbing club and the largest mirror palace in the country. The commodity sold here is fashionable and fit for the young people, so it is also nicknamed as the Shopping Paradise of the Young.

Having Fun at Bar Streets at Night in Beijing

After the tired sightseeing activities in the day, you may want o grab a cup of drink in a pub? There are two top well-known bar streets in Beijing: Sanlituan and Houhai.

Sanlitun Bar Street is the most famous bar street in Beijing. Located in Changhong Bridge, Ease Third Ring Road in Beijing, Sanlitum Bar Street is known to most of the foreigners traveling to Beijing. The embassy district is in the north of the bar street. As the most famous foreign area in Beijing, 77 embassies gather in Sanlitun. Otherwise, UNDP, Population Development Program and other international agencies, foreign-related hotel, foreign trading companies are also near here. So you can find many foreigners visitors here. Compared with bar street in Houhai, Sanlituan is much noisier.

• Houhai Bar Street
Houhai is located in the center of Beijing; it’s only four or five stations from Tiananmen.In recent years it has become famous for nightlife because it is home to several popular restaurants, bars and cafes. Until recently Houhai only consisted of a few restaurants. Houhai first become popular with modern establishments on the newly constructed Lotus Lane in 2003. 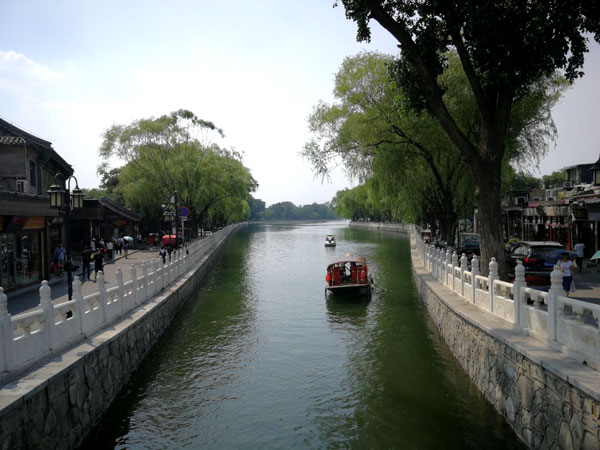 The night view of Beijing City is quite attractive, with decoration of colorful lights. There are quite many sites to see attractive night view in Beijing. Here recommends some classic one for you to explore. 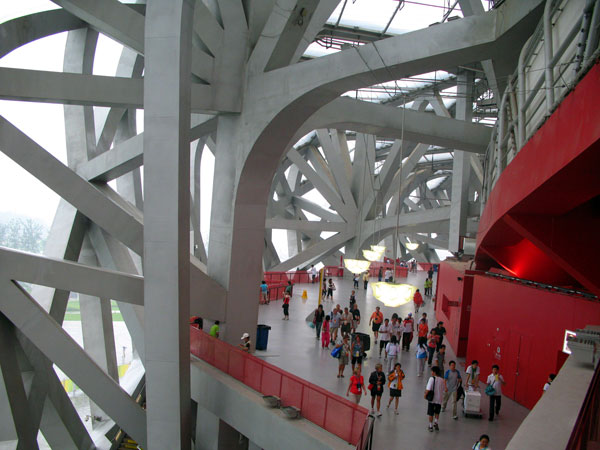 • Chang’an Avenue
Chang'an Avenue was considered to the longest and widest street in the world. This street has a very important status in China. The symbol of China - Tian’anmen Square and Tian’anmen Squares are sited in the Chang'an Avenue, as well as the Great Hall of the People, Zhongnanhai Government Office, the Ministry of Public Security, Ministry of Commerce and other central government offices. Chang'an Avenue starts from Dong Dan Street and ends at Xi Dan Street, with a length of about 8 kilometers. Tian’anmen Building is right in the middle of the Avenue in the north, and the Tian’anmen Square is in the south. There are many other famous buildings along the avenue, such as the National Museum of China, Forbidden City, National Grand Theatre, Beijing Concert Hall, Chinese Military Museum, etc. There are many key business districts on both sides, such as CBD, Dongdan Shopping Mall, Wangfujing Commercial Area, Xidan, Shopping Mall and Financial Street. China's central bank - the People's Bank of China is also on the Chang'an Avenue. So this avenue decorated with colorful streamers is a must visit for your night trip.


• Shichahai
There are quite a large number of typical Hutongs and courtyard houses around Shichahai Lake. You can tour along the Hutongs to savor the ancient buildings of old Beijing and read the history of this ancient capital. The night view of Hutongs and courtyards decorated with red lantern looks quite different from those high-rise buildings. Taking a leisure walking along the lakeside would be a romantic thing for the couples to do. Here also collects all kinds of bars and pub. You may nip into one and have a drink.

• Qianmen Street
Qianmen Street is a famous commercial street in Beijing with a long history. Along the street collects many time-honored brand shops, such as Tong Ren Tang Pharmacy, Zhang Yi Yuan Tea House, Nei Lian Sheng Shoes Shop, etc. This is also one of the most prosperous and bustling places with rich nightlife in this city. 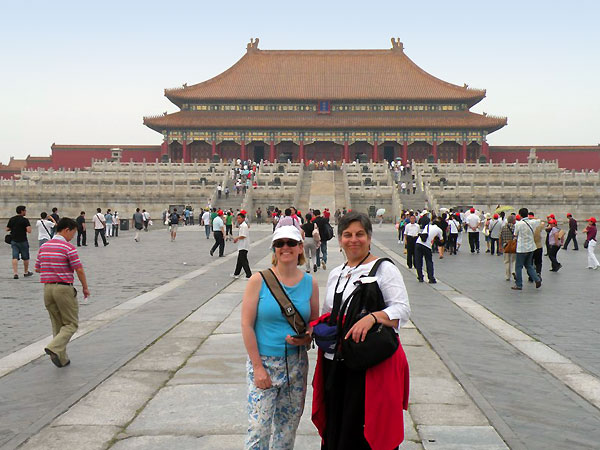