The Central Axis of Beijing 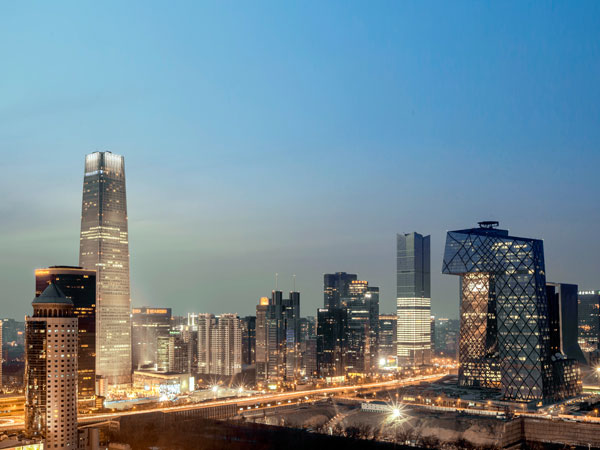 Origin of the Central Axis of Beijing
The Central Axis of Beijing was officially formed in Yuan Dynasty. It was located in the center line of old Drum Tower Street the axis and the southern extension line of it at that time. It passed the center of the palace in the east of Taiye Lake. To the Ming dynasty, the kind made the Beijing central axis move eastward by 150 meters, and it eventually formed the layout of today.

The establishment of the axis aims to emphasize the centrality of the feudal emperors at that time, as the name of China means the "central country of the world". Overall urban layout of the city is center with this central axis, with the imperial ancestral temples to the left, altars of Land and Grain to the right, the courts in front of it and the markets behind. Thus, Beijing is one of the brilliant cities in the world with the most brilliant urban layout.

Layout of the Central Axis of Beijing
The Central Axis of Beijing starts from outer urban Yongding Gate in the south, via the inner urban Qianmen Gate, Zhonghua Gate, Tiananmen, Duanmen Gate, the Meridian Gate, Gate of Supreme Harmony, then go through the Hall of Supreme Harmony, the Hall of Preserving Harmony, Palace of Heavenly Purity, Palace of Earthly Tranquility, Gate of Divine Might, cross Longevity Hill, Shouhuang Temple, Drum Tower, and leads to the Bell Tower in the center. This axis connects four important places of the city, that is, the outer urban Beijing, the inner urban Beijing, the Imperial City and the Forbidden City. It is like the backbone of Beijing city. It reflects the thought of the "unique” of the feudal emperors.

In addition, the Temple of Heaven, Xiannongtan Altar, Dongbianmen Gate, Chongwen Gate, Xuanwu Gate, the Imperial Ancestral Temple, Donghua Gate, Xihua Gate, Xizhimen Gate, Dongzhimen Gate, Andingmen Gate and Deshengmen Gate are distributed symmetrically with the symmetry axis. All royal palaces, altars, government office and other important government buildings are attached together with this axis. The buildings are both a symbol of the ancient capital of Beijing, and it is a symbol of Chinese civilization.