The Back Three Palaces in Forbidden City 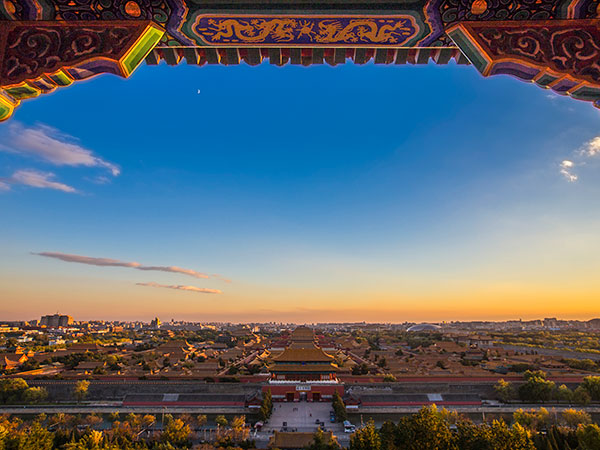 The Palace of Heavenly Purity (Qianqing Palace), the Hall of Union and Peace (Jiaotai Hall), and the Palace of Earthly Tranquility (Kunning Palace) are in the center of the imperial palace in Forbidden City. They were the residence of the queen and princess, and the place where the emperor dealing with everyday concerns. The building style of the front part in these palaces presents the emperor's supreme, solemn, dignified, glorious and majestic kingship, while the building style in the back part is lively which has many small gardens, study rooms, pavilions and rockeries.

Palace of Heavenly Purity (Qianqing Palace or Qian Qing Gong), one of three imperial harems, is the main hall of the imperial palace in Beijing Forbidden City. It is the place for the residence and the day-to-day public affairs of Ming and Qing emperors in the Forbidden City. It is the first of the three imperial harems, locate inside the Gate of Celestial Purity. "Qian" means "Heaven", and "Qing" means "Purity"; the name of this palace means: lucid sky - a symbol of national stability, also a symbol of the emperor's clear and magnanimous behaviour. Palace of Heavenly Purity has double eaves, hip roof, yellow glazed tiles, located above the single-layer white marble pedestal, covering an area of 1400 square meters. There are 9 spinal animals on the eaves angle, decorated with golden dragons pattern. The palace was paved with gold brick. In the spacious front of the palace, on both side of the platform, there are copper turtle, the copper crane, sundial, grain measure, 4 gilding incense burners. 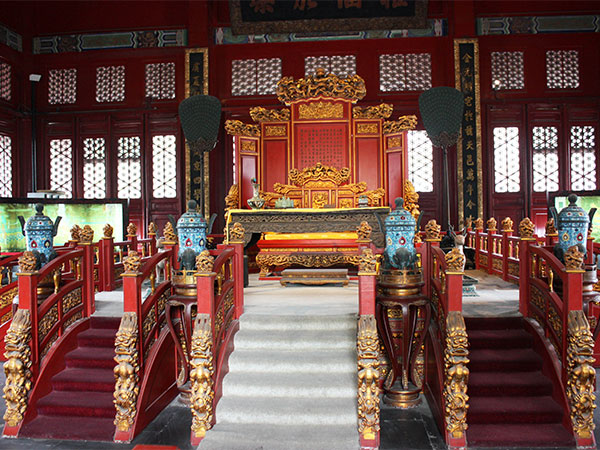 Palace of Earthly Tranquility (Kunning Palace or Kun Ning Gong), the internal construction of the Forbidden City in Beijing, is one of the queen's palace. Since Emperor Yongzheng of the Qing Dynasty, Kunning palace was nominal main palace, but the actual use was the shamanic's ritual spaces and the emperor's wedding bridal chamber. Palace of Heavenly Purity represents masculine gender, and Kunning palace represents feminine gender, combining them means combination of masculine and feminine. There appears to be 9 rooms in this palace; the main entrance is not centered but inclined to east side; the partition door is boarded door; the windows are hanging windows. Both the ends of the eastern and western have passageways; the east room is the emperor's wedding bridal chamber room and the west is place for sacrificing the god.

Hall of Union and Peace

The Hall of Union and Peace (Jiaotai Hall or Jiao Tai Dian) is in the middle of the Palace of Heavenly Purity and the Palace of Earthly Tranquility. Its name means ‘the union of the heaven and earth, the health, safeness and happiness". Built in the Ming Dynasty and rebuilt in 1798, the hall is a square palace with gilded roof and decorated with dragon and phoenix patterns. During Ming and Qing dynasties, it was the place where the queen held birthday party.