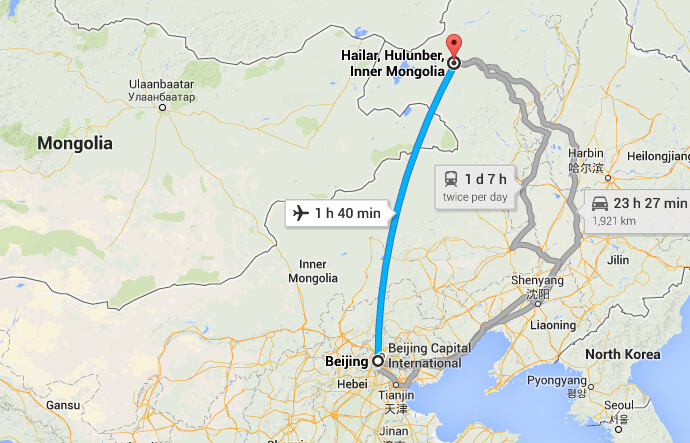 Hulun Buir Grassland is located in Hailar District in Hulunbuir City, in northeastern Inner Mongolia, in the People's Republic of China. Hulunbuir City borders Russia to the north and west, Mongolia to the south and west, Heilongjiang province to the east and Hinggan League to the direct south. It is about 2017 kilometers away from Beijing.

If you want to travel to Hulun Buir Grassland from Beijing, there are a couple of ways for you to choose.

Travelling to Hulun Buir Grassland from Beijing is the fastest way. It only takes about 2 hours. There are flights every day departing from Beijing Capital International Airport and arriving at Dongshan Airport. The airport is only 5 km to the city center with airport shuttle buses. You can also take a taxi to or from airport for around RMB25. You can easily get to the glassland area for Hailaer.

Hailar Dongshan Airport (HLD) in Hailar District has daily flights to Beijing, Hohhot, Shanghai, Shenyang and more. You can check the flight information before your departure.

Hailar Railway Station is in the northwestern part of the town. A taxi ride from the station to a hotel in city center costs about RMB12.

Summer from June to early September is the best time to travel to Hulun Buir Grassland.