Beijing, with a hundred of large and medium-sized shopping malls, is the only inland city which was selected as one of the top 15 world's shopping cities. The Wangfujing Commercial Street, Qianmen Dashilan, Xidan Commercial Street are Beijing's traditional business districts; China World Shopping Mall, Oriental Plaza and Zhongguancun Square are new commercial hubs in recent years. If you are interested in a curio, you can stroll in the Liulichang or Panjiayuan Antique City. If you have a soft spot for the apparel trade, you can not miss the Xiushui Street and Yaxiu Clothing Wholesale markets. Top China Travel has listed the Best Shopping Street in Beijing for your reference, hence, you can have a good choice for your shopping during your Beijing Tours.

Xiushui Street, as one of the most popular destinations to overseas tourists in Beijing, attracts domestic as well as foreign tourists with commodities at a cheap price. It is several hundred meters long and is also known as the Leading Foreign Trade Market. Since 1987, more and more vendors began to sell traditional Chinese silk products and crafts at here. Its repute spread fast, and more and more customers and travelers are attracted by the reasonable price of its products. When you shopping in this market, you can heat that the assistants promote their goods in various languages. No matter you want to buy the good only belongs to China or popularizes in the world, this market can meet you need with variety commodities, including curtains, tablecloths, bedding, earrings, and watches as well as clothes, inexpensive caps, and shoes of excellent workmanship. If you want to buy something, you should check with more than one store and haggle over the price.

Wangfujing, a 700-year-old commercial street in Beijing, has maintained its position as the number one choice for shoppers since the mid-1980s. The Wangfujing Department Store has long been acknowledged as the largest, most fashionable one-stop shopping center in Beijing. It is filled with large shops, hotels, specialty shops and its illustrious old-time Beijing shops. It is famous for its celebrated long-established shops selling the shoes of Neiliansheng and Buyingzhai, the hats of Shengxifu and Majuyuan, the silks of Ruifuxiang, the scissors of Wangmazi, the writing brushes produced in Huzhou and ink sticks produced in Huizhou of Daiyuexuan, the antiques and jade wares of Jiguge, the tea leaves of Yuanchanghou, the cakes of Daoxiangchun, Guixiangcun and Xiangjugong, the roast ducks of Quanjude, the pickles of Liubiju, the pork cooked in soy sauce of Tianfuhao, the traditional snacks and Hongluo preserved fruits are sold in the shops along this street of old Beijing. 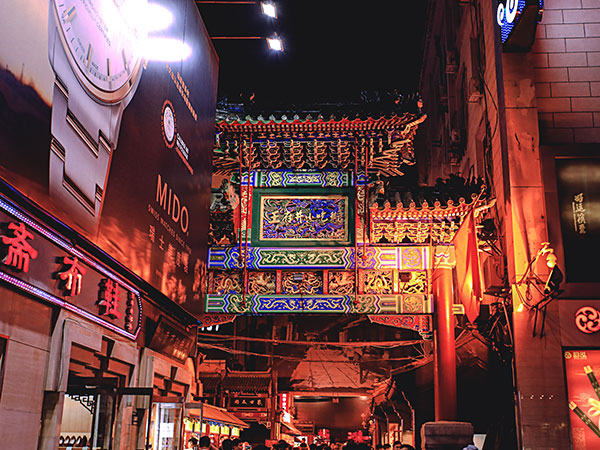 Qianmen Commercial Street, is a flourishing old street with many special time-honored shops passed down from older generations. It is considered one of the most popular places for visitors to Beijing. As the birthplace of many time-honored domestic brands such as Quanjude Peking Roast Duck and the China Bookstore, Qianmen Street has long been the commercial hub of the capital. And there are so many time-honored domestic brands in the street, such as Tongrentang (tóng rén táng), Chinese Herbal Medicine Pharmacy; Ruifuxiang Silk and Leather Store (ruì fú xiáng), Zhang Yi Yuan (zhāng yī yuán), a tea shop; Go Believe (gǒu bù lǐ) baozi, etc. And now that many foreign brands, including Swedish fashion chain H&M and Zara from Spain have established a presence there, the street is becoming more international. 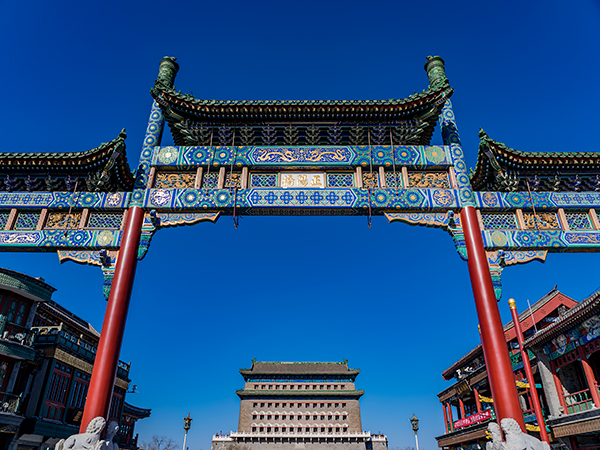 Xidan Commercial Street, located 2 kilometers (1.2 miles) west of Tiananmen Square, is known as one of the three most famous commercial centers in Beijing, together with Wangfujing Dajie and Qianmen Da Zha Lan. It is a modern, international, commercial combination of shopping, dining, recreation and culture which consists mainly of food markets, clothes stores and commodities. The central area is Xidan Cultural Square, the largest venue for cultural entertainment along Chang'an Street, composed of underground restaurants, markets, cinema, bowling alley, swimming pool, rock-climbing club and the largest mirror palace in the country. Here, there are many shopping malls, such as Xidan Market, Xidan Shopping Center, Xidan Scitech Shopping City and Zhongyou Department Store, and some long-established shops such as Guixiangcun food shop, Wanli shoe shop, Yuanchanghou tea house and Beijing Book Building.

Liulichang Street, known throughout China and the world for its ancient books, calligraphy, paintings, rubbings, ink stones and ink, and many other traditional Chinese curios, is now the best place to find these items in Beijing and is the right place if you are interested in antiques or Chinese cultural commodities. With brightly painted doors and eaves and gracefully curved black-tile-roofs, Liulichang still bears the appearance of a Qing Dynasty market street and retains a little of the style of old Beijing. The China Bookstore, Rongbaozhai, and Jiguge are the most famous antique stores in Liulichang. The China Bookstore enjoys a reputation of being the place in Beijing to find second-hand foreign language books. 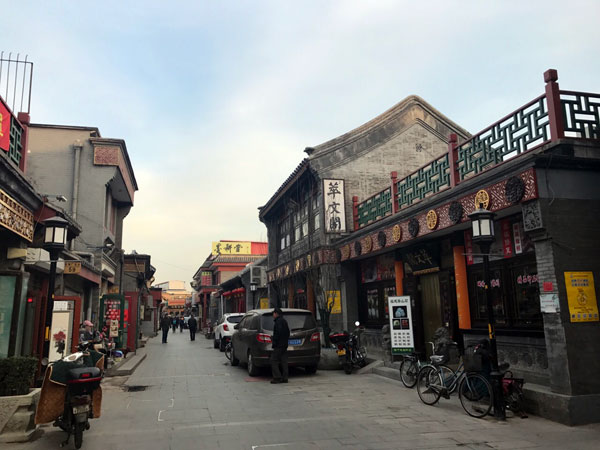 Panjiayuan Antiques Market, deals mainly in antiques and arts and crafts, also has the reputation of being the most inexpensive antiques market in Beijing, attracting foreign and domestic tourists. It is the largest antiques market of its kind both in China and Asia. Whether you want to sightsee, window-shop or buy collectors' items, there really is something for everyone. Secondhand goods, arts and crafts and antiquities are the main transactions in the market. Also on offer are antique furniture imitations, what is known to the Chinese as the "Four Treasures of the Study" (writing brush, ink stick, paper and ink slab), old books and paintings, agate, jadeite, ceramics, ancient Chinese and foreign coins, bamboo and animal bone sculptures, leather puppets for shadow play and a wide range of Chinese opera masks. 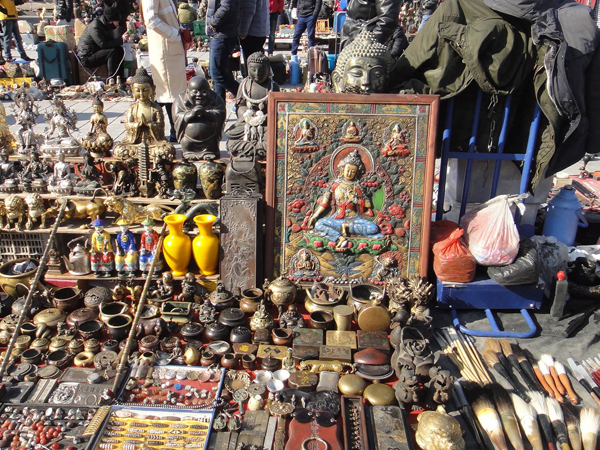