Building Style of the Forbidden City

The Forbidden City was built by the rule of “palace in the front and bedroom behind" in《Rites of Zhou》. From a single brick and tile, the whole Forbidden City shows the supreme kingship. It constructs an integral whole with shape-shifting and undulating technique. It shows the feudal hierarchy of ancient China. Also, it is a rotational symmetry layout with a shape-shifting artistic effect. 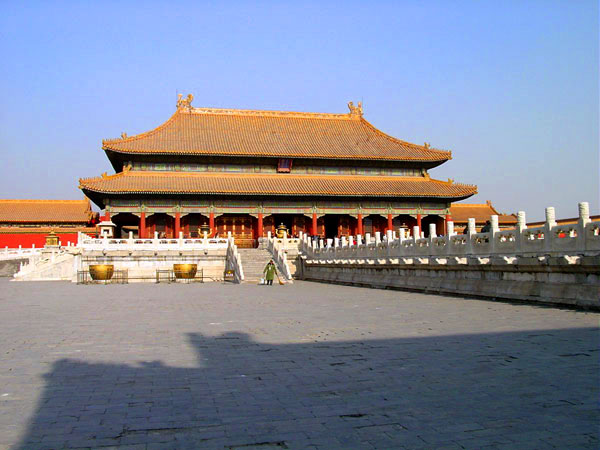 There are lots of style about roofs in Chinese building’, and there are over 10 types of roofs in the Forbidden City. Using the three main palaces in the Forbidden City as an example, which have different sorts of roof. Most roofs are covered with colorful glazed tiles. Yellow is the main color of main palaces and green is the color of those living building for princes. Other colors such as blue, purple, black, peacock green, jewelry blue are wildly used in gardens or coloured glaze walls. The two sides of the main ridge in the Hall of Supreme Harmony have two coloured glaze shibi with their opened mouths holding the ridge. With their beautiful design, they are both constructional element and decoration. Some Tile pieces have shapes like dragon and phoenix, lion, sea horse or some other animals, which stand for luck and majesty. 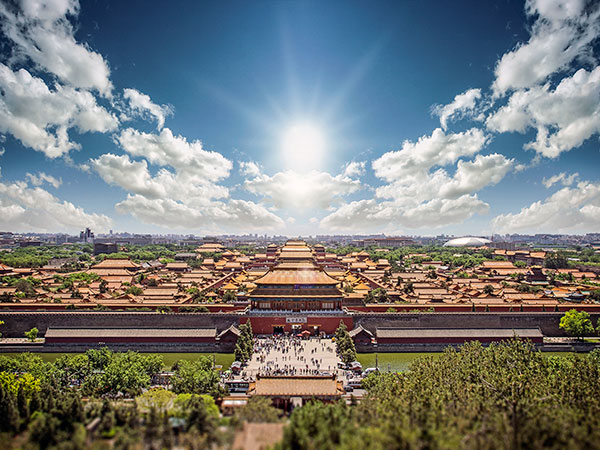 The front palace in the Forbidden City was required to be built into a great style with broad yard to represent the supreme of kingship. The Hall of Supreme Harmony is in the centre of the Forbidden City with 40 lively auspicious beasts on the four angles of the roof. However, the inner imperial palace has deep yard and tight buildings. Those palaces all have their own doors and high walls which were relatively well-ordered. There are also many palace lamps and embroider beds in each palace which were the necessary furnish of the high life. And the back garden has many pine, cypress and rockeries which gives a silent and peaceful living environment.