The Beijing-Shanghai High-speed Railway which can be called Jinghu High-speed Railway is one of the great projects in China. With a total length about 1,318 kilometers, this high-speed railway is a tie connected two major economic zones in the People's Republic of China: the Bohai Sea Rim and the Yangtze River Delta. This project had already began in 2008 April and lasted for about 2.5 years. It will be finished in the October 2011 according to the schedule as a milestone in China railway industry.
The new Beijing-Shanghai line is being built to improve journey times and ease pressure on existing railway corridors between the two cities. At the very beginning, construction of this project was expected to take five years. But till the end of 2010, this high-speed railway line had been in a comparative mature stage and it may be open in the next October with a 3.5-year project time.
With an aim to serve a train runs in 380km/h, once till this railway is open, it will be named as the world’s fastest one — the position currently occupied by the trains of the Wuhan–Guangzhou line, which opened in December 2009. The non-stop train from Beijing South to Shanghai Hongqiao is expected to finish the 1305 km journey in 3 hours, 58 minutes, averaging 329 km/h. 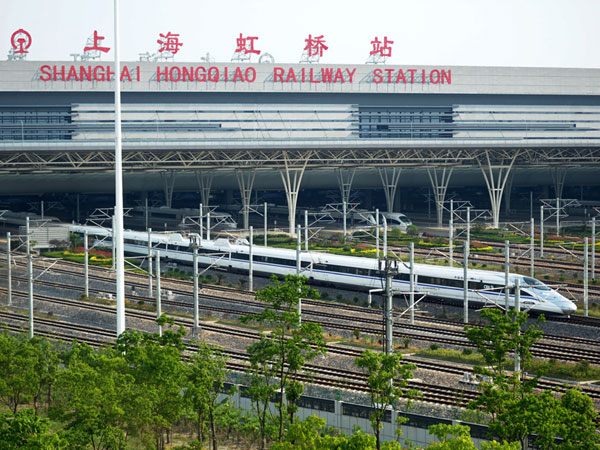 *The Project of Beijing-Shanghai High-speed Railway
After about 10 years to discuss since 1998, this high-speed railway project had been started in 2008. With the announcement of Premier Wen Jiabao in the opening ceremony on 18th April 2008, the railway project with the largest investment, the highest technique and the advanced world constructed level started its first footprint.
According to the situation along this line - more than a quarter of the country's population lives close to the line, which accounts for 10.2% of passenger transport and 7.2% of freight, this project is a chance for China to help the domestic economic field as well as tourism industry enter into a rapid developed era.
In the past, people who took trains to Shanghai from Beijing had to spend 14 hours. While this high-speed railway will reduce this journey time into 5 hours with a transport volume of about 220,000 passengers per day
*Infrastructure
With the original project plan, the Chinese Ministry of Railways prepared to build this high-speed railway with the domestic technology only. However, in May 2006, the Ministry opened an invitation to tender for contracts to the foreign market, with particular interest in the German and French high-speed railway technology.
From the data referred, Beijing-Shanghai high-speed railway will built about 21 from the Beijing South Railway Station to the Shanghai Hongqiao Railway Station via many provinces with some stops there.
According to the present process of it, the high-speed rail with maximum speed of 380 kilometers per hour crossing the 1,318 kilometers of Beijing to Shanghai line required higher and more precise requirements over the track.
Two thirds of the new route is expected to be constructed on embankment, with the vast majority of the remaining third being laid on bridges. Two major river crossings, of the Yellow and Yangtse rivers will be needed.
*Specifications
The Beijing–Shanghai High-Speed Railway Co., Ltd. is in charge of construction. The project is expected to cost 220.9 billion yuan (about $32 billion). An estimated 220,000 passengers are expected to use the trains each day, which is double the current capacity. During peak hours there should be a train every five minutes. 1060.6 km, or 80.5% of railway will be laid bridges. There are 244 bridges along the line. The 164-km long Danyang–Kunshan Grand Bridge is the longest bridge in the world. The 113.69-km long viaduct bridge between Langfang and Qingxian is the second longest in the world, and the viaduct between Beijing's Fourth Ring Road and Langfang is the fifth longest. The line also includes 22 tunnels, totaling 16.1 km. 1196 km of the length is ballastless.
According to Zhang Shuguang, the deputy chief designer of China's high-speed railway network, the continuous operating speed is expected to be 350 km/h (220 mph), with maximum operating speed up to 380 km/h (240 mph). The average commercial speed from Beijing to Shanghai will be 330 km/h (210 mph) and cut the train travel time from 10 hours to 4 hours. The rolling stock used on this line will be the CRH380 trains. CTCS-3 based train control systems will be used on the line, to fulfill the requirement of 380 km/h of running and the minimum train interval at 3 minutes. 16-car trainset will be used, the power of each trainset will be 20 MW, at capacity of about 1050 passengers, each passenger from Beijing and Shanghai consumes less than 80 kWh in average.
To ensure the safe, high-speed and stable operation of the train, the Beijing-Shanghai high-speed rail line utilized the Chinese Railway Type II slab tracks, the world's most advanced track system. These tracks replaced the traditional railway ballast by concrete paved board with the base structure to reduce the vibration noise of the high speed rail with sound track geometrical conditions that will provide better comfort for passengers. 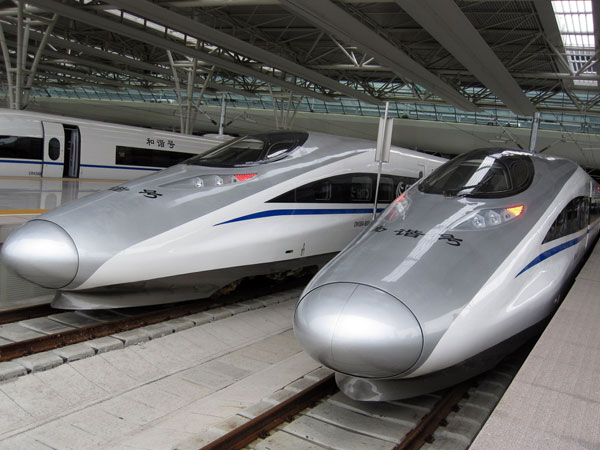 In June 2011, Beijing-Shanghai High-Speed train may be launched and officially open to the public at the end of June. And the trial prices had been announced as following: