Beijing Sanlitun - The Most Famous Bar Street in Bejing

Sanlitun Bar Street is the most famous bar street in Beijing. Located in Changhong Bridge, Ease Third Ring Road in Beijing, Sanlitum Bar Street is known to most of the foreigners traveling to Beijing. The embassy district is in the north of the bar street. As the most famous foreign area in Beijing, 77 embassies gather in Sanlitun. Otherwise, UNDP, Population Development Program and other international agencies, foreign-related hotel, foreign trading companies are also near here.

The File of Sanlitun Bar Street

In 1993, the Sanlitun District office makes Sanlitun Road extended 260 meters to the north, in order to develop the economy. They built 36 business rooms in the East Road to use for operating crafts, gifts, flowers, clothing and porcelains trade. Due to the small scale of operation and miscellaneous varieties, this street had been in a half-dead state. In April, 1995, two young people invested several hundred thousand yuan to open the first bar “Swing Bar” in Sanlitun North Commercial Street. Swing Bar brought vitality to the deserted commercial street. However, as foreign culture with bars, most Chinese people do not know much about it, so most of the people who came to the bar were guests with the embassy. And the bars were closed at day. As people got to know more about the bar culture, more and more Chinese go to the bar to enjoy their spare time too. The bar street came to be famous during this time.

Sanlitun district is near to the Beijing Second Embassy District, so the majority of customers are foreigners. In addition, many foreign companies gather around the place and there are a lot of white-collar executives. And there are also media workers, entertainers and young people stroll around. With the constantly development of Sanlitun, there are upscale restaurants and shopping centers everywhere. Many foreigners drive or take taxi to come here every day. And not only foreigners like to come here, but many Chinese people also take their friends to come here as communication place. 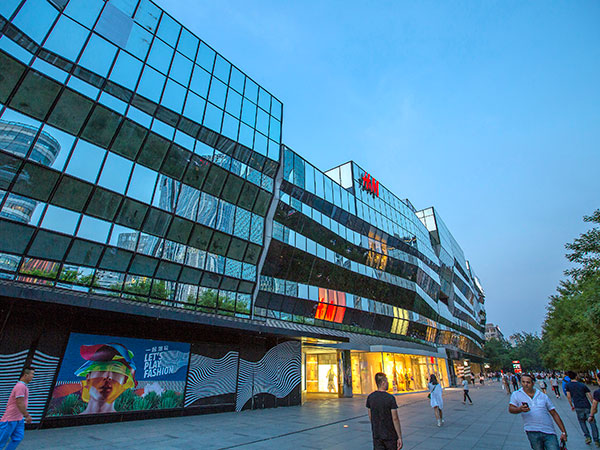 • Boys & Girls BarBoys & Girls Bar is the large bar in Sanlitun Bar Street, and also the first to provide on-side cabaret bar. The line of Boy & Girls bar is quite clear with flashing neon lights. The silvery metal door is like a boy wearing fashionable dressing, while the upper curved hollow glass like a whirling skirt sexy girl. Besides the elongated bar counter in the bar, this place is fill with small square tables and boys and girls who are drinking wine and playing games.
Address: No.68 Sanlitun North Street

• Swing Bar
Swing Bar is regarded as a Rock Bar. There is a huge abstract painting in red and brown on the pitched roof, with a indigenous painting style. On the black metal walls sticks posters of famous rock bands, such as ROLLING STONE, GRUNSU ROSE and so on.
Philippines Band is the distinguishing feature of Swing bar. Their cheerful music makes you indulge in the environment. Their sounds sometimes make you seethe with excitement, sometimes bring you away with romantic lyric.
Address: No.68 Sanlitun North Street

• Jass Ya
Jass Ya is a bar that features with western-style and Japanese cuisine. Jass Ya provides customers with more than 150 kinds of main dishes and 200 kinds of drinks. Therefore, the varied diet is also charming to the drinkers. What also makes you enjoyable is the sound effect in the bar. You can either enjoy your cocktail at the bar, or dine in the relaxing jazz atmosphere. You can stay here just like staying in the home of your friends, as there is a feeling of comfort you could not help but want to sit there longer. You can experience the collision and exchange between western and eastern culture in the small shop filled with blue music.
Address: Sanlitun North Street

• Day Off Bar
Day Off Bar is located on the prime place in Sanlitun Bar Street, with Boy& Girls Bar in the right and Milan Club in the left. The bar is quite popular in the area. It was opened up in 1996 and owns 120 seats. The decoration of the bar contains with some kind of the favor of the American western cowboy. The bar counter is oval U-shaped. Beside the brown oak tables stand black bar stools. And around the dancing floor casually stands wooden table and chairs, which looks quite simple. The cross of iron and wood on the roof reflects t he strength and wildness of the bar. Day Off Bar plays the classic dancing CD that come from many countries. Some of the CDs were gave as presents by those who often danced here. Among these CDs, the Turkish dance CD given by the Turkish embassy is the most popular one. It is said once the CD was played, people could not help themselves but dance together. Day Off Bar of one of the few entertainment places in Sanlitun Bar Street that require tickets. But it does not charge everyday and it depends on the number of guests.
Address: No.8 Sanlitun North Street

Do you like bars? Are you a fashion follower? If yes, just come to the Beijing Sanlitun Bar Street to enjoy the bar ambience.