Beijing Central Business District (or Beijing CBD) is the primary area of finance, media, and business services in Beijing, China. Covering an area of 3.99 km2 of the Chaoyang District, it is sited in the east of the city center and sandwiched between the 3rd Ring Road and 4th Ring Road. It is a commercial center like Manhattan of New York, the Central of Hong Kong, nor La Defence of Paris.

It is the city's largest, most international center of commerce. Hundreds of multinational companies and financial institutions have offices in the CBD, including Motorola, Ford, Hewlett-Packard, Samsung, UBS, IBM, PricewaterhouseCoopers, and a great many more. There are also a number of world-class shopping malls, including China World Trade Center Mall, Guiyou Building and more, and five-star hotels and gleaming office buildings in this district.

Beijing CBD is home to many of the executives living and working in Beijing, with both a high cost and a high quality of living on offer. The elites living in the CBD tend to hold to the standard of "high income, high consumption, and high class" in all aspects of their lifestyles. The are plenty of Western dining and shopping options in the CBD, and for families the large collection of international schools in the Lufthansa Area are little more than a stone's throw away.

【Management Function】By gathering a variety of domestic and multinational headquarters, it plays the role of corporate strategic planning and production decisions of the central role of the instructions. It issues investment, operation and production organizations to achieve regional economic operation of radiation control, which make itself an important space node for the global economy cycle network.

【Distribution Function】
It attracts domestic and multinational financial and insurance institutions, well-known media companies and other professional services organizations to the establish convenient international capital markets and accelerate the transfer and use of information it brings together a number of international and domestic high-quality talents, so the central business district become a distribution of various economic resources and important areas of production factors.

Skyscrapers in the Beijing CBD

【CCTV Headquarters】The attractive CCTV Headquarter which was completed on Jan 1, 2008 is a 234 m (768 ft), 44-storey skyscraper in the Beijing Central Business District and serves as headquarters for the China Central Television. Rem Koolhaas and Ole Scheeren of OMA were the architects in charge for the building, while Arup provided the complex engineering design. The CCTV Headquarters won the 2013 Best Tall Building Worldwide from the Council on Tall Buildings and Urban Habitat.

it's said that a taxi driver first came up with its nickname dà kùchǎ (大裤衩) for its shape, roughly translated as, "big boxer shorts" .Locals often refer to it as "big pants". 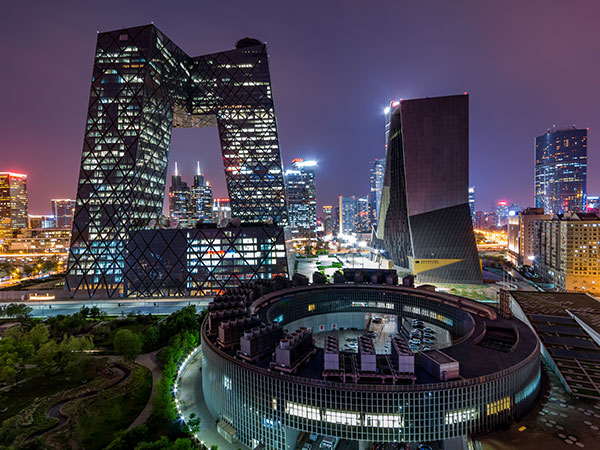 【China World Trade Center】
China World Trade Center is the central business district of Beijing, China. it is the largest building complex of Beijing consisting of around 14 components including hotels all of Shangri-La, shopping malls, offices, apartments, convention rooms, and an exhibition hall. This building is well known for being the largest up-market commercial mixed-use developments in the world and for keeping its reputation as an internationally friendly community.

Connecting the three towers is a podium which comprises of various world class facilities, including numerous high-end luxury boutiques, conference and banquet facilities, Chinese and Western restaurants, a modern fitness centre and a healthy spa.

You can easily get there by taxi. You just need to write down the Chinese address and give it to the driver. Or you can take Subway Line 1 or Subway Line 10 and get off at Guomao Station.