In Tibet, there are many famous high mountains, which constitute the basic skeleton of the plateau topography and are also the center of the ancient and modern glaciers. The peaks of mountains with an altitude above 5000 meters, are perennially covered with snow. Glaciers have develop widely among the mountains after decades. The mountain ranges of Tibet can be divided into two types, east-west and south-north mountain ranges. The mountain ranges are mainly spread in arc, trending apart in middle and close in both ends, which form Pamir plateau mountains at west and Hengduan mountains at east.

Himalayan Mountains
Winding at the south part of Qinghai-Tibet Plateau, it is a mountain range similar to east-west arcs. It is constituted by many parallel mountain ranges. The main body of the Himalayas is along China, India, and Nepal’s border lines. The himalayas is totally 2400 km long, 200 to 300 km wide, and its average altitude is above 6000 m. Among all the peaks, over 50 of them are over 7000 meters above the sea level.

Mount Everest, with an altitude of 8848.13 meters, is the highest mountain in the world imposing at the border between China and Nepal.  Around Mount Everest, there are 4 peaks over 8000 m above the sea level, 38 peaks above 7000 m. It is rare to see so many high peaks gather at one place in the world. It is also reputed as “The Third Pole” of the world. The natural landscape here is magnificent and it’s a place to explore the mystery of earth. 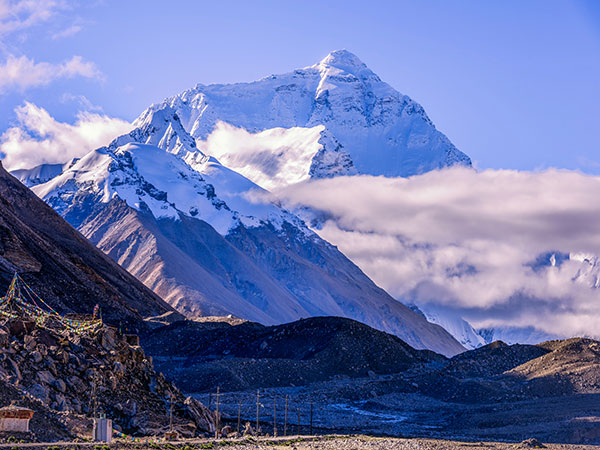 Gangdise - Nyenchen Tanglha Mountains
Located at the middle part of Qinghai-Tibet Plateau, Gangdise - Nyenchen Tanglha Mountains is a huge mountain chain extending from east to west. It is the boundary of South Tibet and East Tibet, and also the boundary of exterior and interior rivers. The mountains is 1500 km long and 80 km wide with an average altitude from 5000 to 6000 m. There are 25 peaks with altitude over 6000 m. The main peak of Gangdise mountains – Mount Kailash is 6656 m above the sea leavel. And Mount Nyainqentanglha of the Nyenchen Tanglha Mountains is 7717 m above the sea level. Mount Kailash is the famous pilgrimage site of Buddhism.
Kara Kunlun – Tanggula Mountains
Kara Kunlun Mountains’ main body is located at the borderline between Xinjiang Uygur Autonomous Region and Kashmir. Only its east extending part is in Tibet with an average altitude above 6000m, and connects with Tangula Mountains. Tanggula Mountains is the border mountain range between Qinghai and Tibet. The highest peak, Gradando Peak, is 6621 m above the sea level. The mountains is also the birthplace of the longest river in China – Yangtze River.
Kunlun Mountains
Kunlun Mountains is located at the north edge of Qinghai-Tibet Plateau. It is the border between Tibet and Xinjiang Uygur Autonomous Region. Kunlun Mountains start from Pamirs Plateau and extending east to Sichuan Basin. It is 2500 km long and 15 km wide with an average altitude around 5500 to 6000 m. It is the skeleton of Western China. As its height and length, it is reputed as the “Backbone of China”.

Hengduan Mountains
Hengduan Mountains is the general name of the south-north mountains of East Tibet, west Yunnan and Sichuan provinces. The several mountains in Tibet are named Boshula Mountain, Taniantawen Mountain and Mangkang Mountain. It is the extension of Nyenchen Tanglha Mountains and Tanggula Mountains. The altitude of the mountains is about 4000 to 5000 m. Among all the mountains, there are deep river valleys. The altitude differences between peaks and the valleys is about 1000 to 2000 m, froming precipitous terrains. 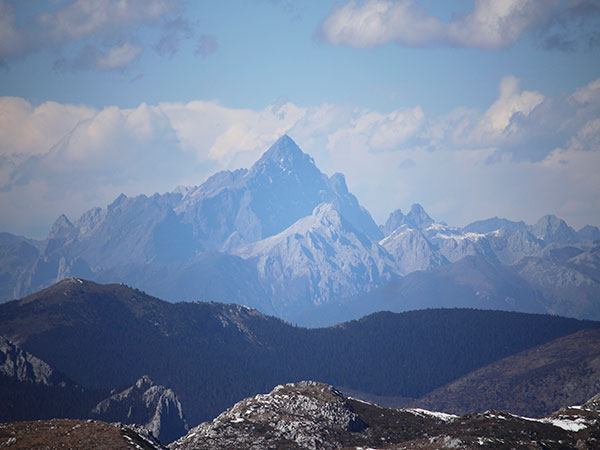 Except for those large and high mountains, there are also many branch mountains, making the plateau full of mountains. The mountains on the plateau usually are with high altitude but with low absolute height. The altitude difference between the plateau and the mountain is just thousands meters. So the plateau looks like a plain when you are on this land.