Luoyang is located in the west of Henan province, China. Known as the ancient capital of 13 dynasties of China, it is home to plenty of historical sites. The famous Longmen Grottoes is situated in Luoyang， which is one of the world's treasure trove of stone carving art. The White Horse Temple is the first Buddhism temple in China. What’s more, Luoyang is particularly well-known as the birthplace of peony. Peony is regarded as the city flower of Luoyang, which attracts tourists and photographers from all over the world to admire its beauty at the florescence.

Peony (scientific name: Paeonia suffruticosa Andr.) is a plant of the ranunculaceae and paeonia species, a perennial deciduous shrub. It is native to China and Japan, which is often used to symbolize wealth, auspiciousness, happiness and prosperity. Peony is the king of flowers and known as "national beauty". The flower is bright and beautiful, with red, yellow, white, pink-purple, green, blue, and some different colors.

When to Photograph Peonies in Luoyang

Peony often blooms from April to May, before or after the Grain Rain (the 6th solar term). Every year, Luoyang will host the Peony Festival from early April till early May, and the best time to photograph peonies is from April 13 to April 25. During that period of time, all peonies with different species and colors are blooming. Luoyang becomes the city of peonies with the fragrance of peonies floating in the air. 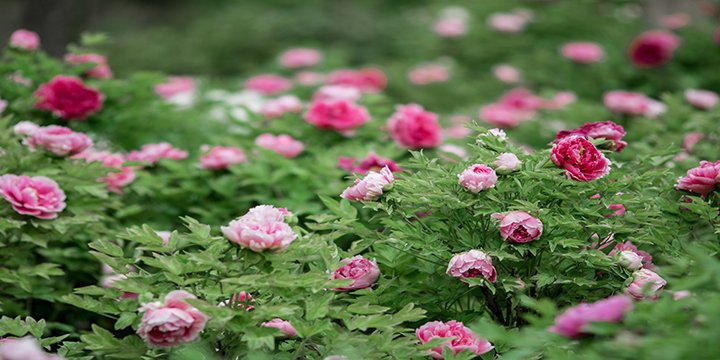 Where to Photograph Peonies in Luoyang

Luoyang is reputed as the peony city where there are many peony parks open to the public. During the Peony Festival, the whole Luoyang city is lit up with peony makeup, and tourists who admire flowers flock to the peony parks. Wangcheng Park is a classic place for enjoying peonies. The white peony fairy statue is surrounded by colorful peonies, and the femininity of women is vividly displayed. China National Flower Garden was built on the ruins of the ancient city of Sui and Tang Dynasties, the classical buildings and the graceful peony flowers are in harmony with each other. If you miss the blooming season, the International Peony Garden and National Peony Garden are good places to enjoy the late-flowering peonies. It can last until the May Day holiday.

Wangcheng Park is the first heritage park in China, one of the largest comprehensive parks in Luoyang and even Henan Province. The park is composed of several parts: ancient cultural area, peony garden, and zoo etc. It is also the main venue of the Peony Festival. The peonies cultivated in Wangcheng Park are mainly early-flowering species, the first florescence is around April 9 and blooming florescence is around April 13. It is a popular place to photograph the early-flowering peonies.

China National Flower Garden is based on the historical culture of Sui and Tang Dynasties and takes peony culture as the main content. It integrates historical culture, peony culture with the garden landscape, which fully shows the beauty, purity and tranquility of peonies. More than 1,000 varieties of peonies are currently planted in the garden, which makes it the largest peony garden in Luoyang with many early-flowering peonies species. Photographers who are interested in peony and ancient historical buildings photography, China National Flower Garden is a must-see place.

International Peony Garden is the largest late-flowering peony garden with domestic and foreign peony species. It is composed of Huaxia Garden, Wanfang Garden, Jinxiu Garden, Jiushi Garden, and Chinese Herbaceous Peony Garden. There are more than 300 domestic and foreign valuable species of peony in the garden, but the flowering time is 7-10 days later than the urban peony gardens blooming, 3-5 days later than the peonies in Mt. Mangshan. The blooming time is generally after April 20. In addition, there are more than 300 kinds of Chinese herbaceous peonies in the garden. Therefore, the International Peony Garden is also the largest herbaceous peonies garden in China.

The Sui and Tang Dynasty Town Botanical Garden is built in 2005, an important place for tourists and citizens to sightsee flowers and entertain. Qianzi Peony Garden is home to over 1,200 peonies species, occupying an area of 54 acres where you can photograph varieties of peonies.

Light is the soul of photography modeling, when shooting peony, sidelight, back sidelight and backlighting should be used according to the scene shooting environment.

Composition determines the success or failure of photography

Compared with other flowers, the stamens of peonies are the most moving and fragrant, giving the beauty of texture and detail. It is suggested to use a macro photography lens.

If you love to see peony in Luoyang, this article about photography tips for Luoyang Peony will be helpful. By knowing the flowering period, you may decide your travel date and book everything ahead of time. It's also a great idea to take part in the Luoyang Peony Festival.

Please feel free to contact our travel advisors if you have any questions about your tour, we're happy to help you out. You can also enjoy a hassle-free tour in Luoyang by telling us all your requests.