We had a Guilin trip with the help from Top China Travel Agency. As soon as we arrived in Guilin airport then took the airport shuttle bus, we got to Guilin City within one hour from the airport. No stop in Guilin, we bought the tickets from Guilin to Longsheng, and after two hours we reached Longsheng County.
Sky began to darken slowly, we decided transfer to Longji Terraced Fields directly. The entrance fee of Longji is RMB50/P.P, the bus climbed about half way up a hill, we need to change bus- scenic spot’s shuttle bus. The exchange fee is RMB30/P.P. After 11 kilometre‘s climbing, we reached Ping’an village which is the most famous Longji rice terraced fields located in. we stayed at a small hotel which was made by wood. There were a TV and a separated bathroom in our bedroom. And the price was very cheap; what is more, the hotel was closed to the best platform for appreciating the scenery. It means we can stay at a suitable place and see the sunrise at the first time. So we went to sleep after we finish the dinner.
We woke up in the morning and the sky was still black. Look out of the window, we prayed today will be a good day. I walk slowly to the attraction and no anybody else except me. I reached the platform. The Terraced Fields became withered and yellow in winter. 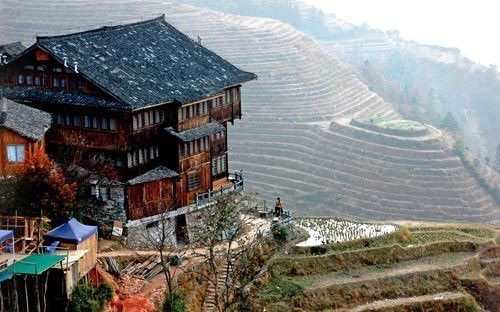 This was the house which I stay in. it just cost 10 min from hotel to the platform by walking. 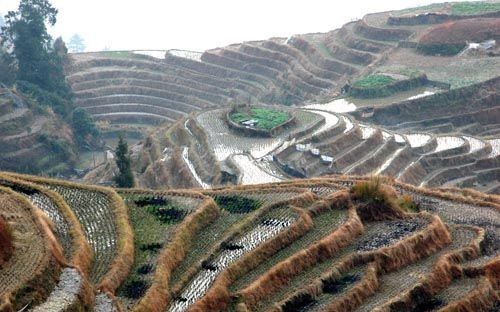 This was the famous “Qi Xing Ban Yue”. What I like most is all the Terraced Fields are flooding and the rice seedling are verdant. But it is winter, there was very little water. Ducks were searching for food in the field. 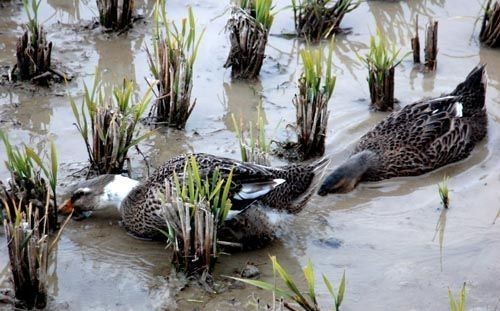 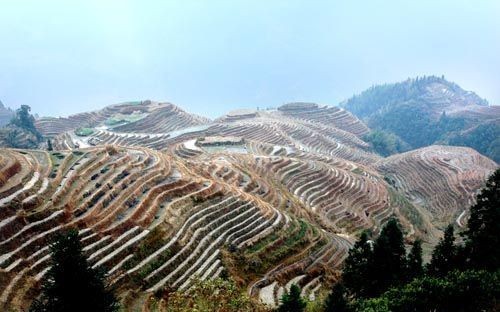 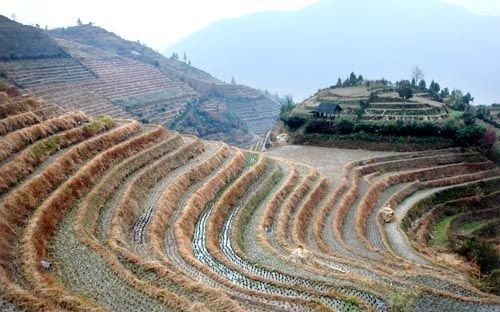 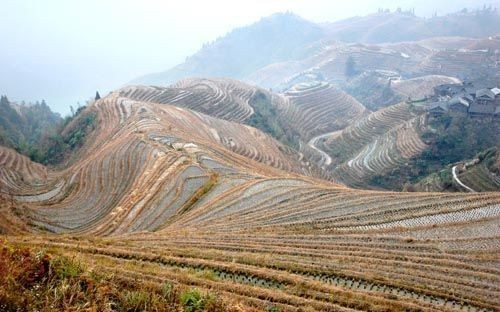 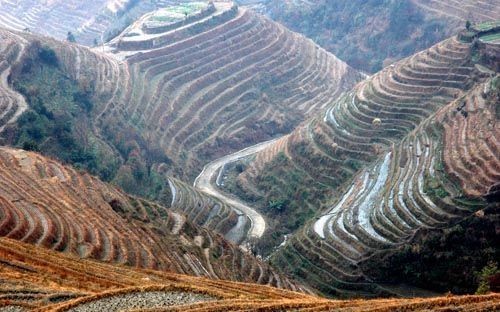 Looking at the spectacular terraces fields at Ping’an village, I really feel that in order to survive they reclaimed those wasteland which now really become works of art. In the acts of forward, I met three person – they are red-minority people who come from Zhongliu village. They came to Ping’an village to do the business of selling some trinkits. There was no highway at Zhongliu village, no car, no carriage, no bicycles, nor the cart, the only traffic was walking. The basket on the back is the tool which can loading everything. One of them want to be my guide to show me the way but I rejected. He on one side was follow me and the otherside was telling me the road was how difficult to walk, and how many branches were. And he can guide me as long as I pay him RMB20. Finally I pay him to be my guide. We went forward and passed through their village – Zhongliu village. And I bough Two bottles of water - RMB3/bottle. 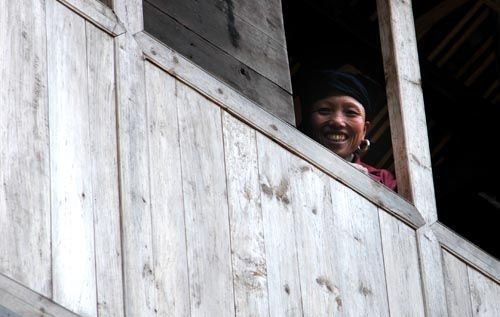 The wooden house of Red-minority people and shy woman. 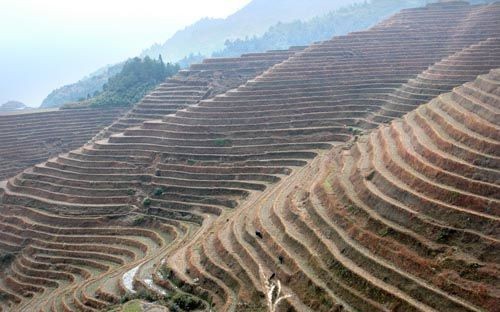 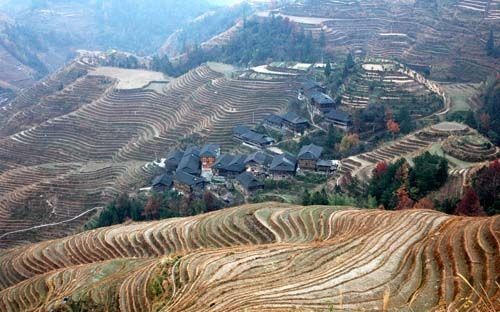 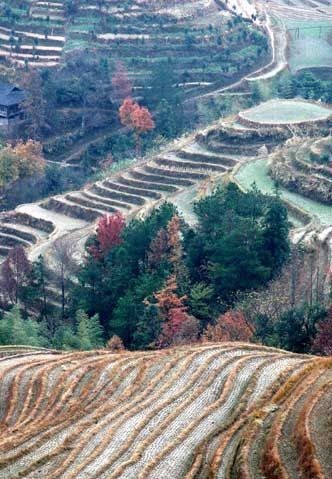 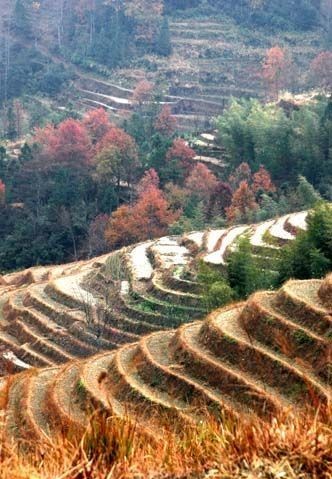 The terrace fields at Dazhai village were really more spectacular. Looking at those terrace fields on the hillside, I really fount that I was so small. The old Red-minority women are doing the crafts. 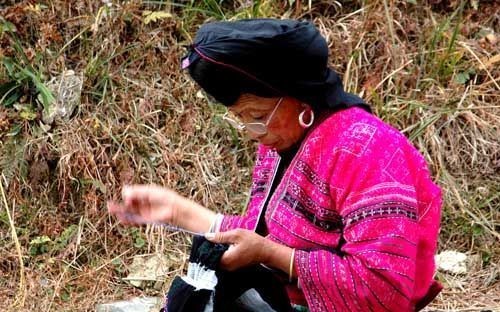 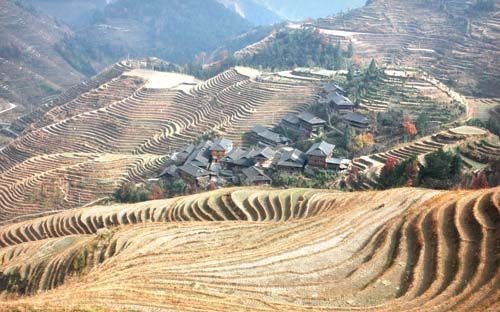 A short stop, I began to return. It cost me 3 hours from Ping’an village to Dazhai village. We came back to Zhongliu village, and I asked my guide to go home and I began to walk alone. In the village I met a enthusiastic people. He asked me to tast oil-tea at home. 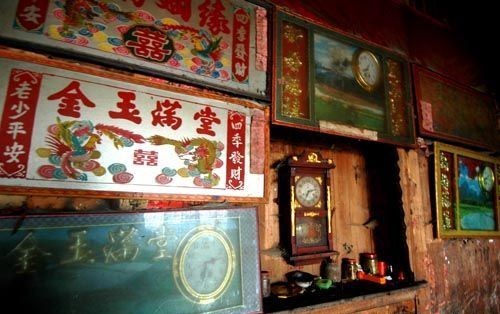 Those were the presents when the host getting married. 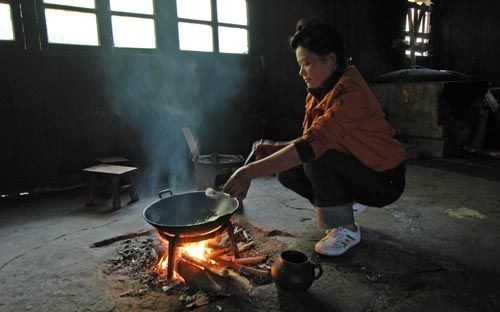 The master is doing the oil-tea 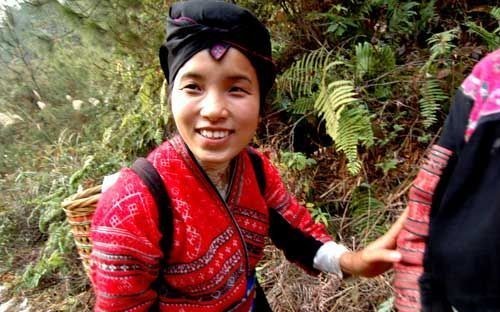 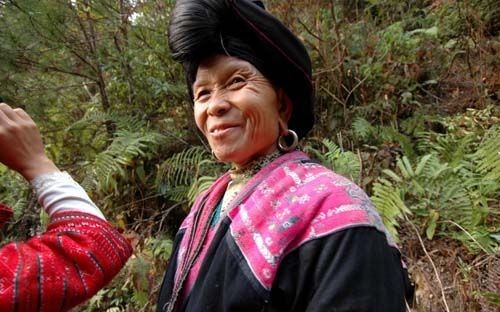 There was a old tradition of Red- minority people that the girls when they grow up to eighteen need to cut their hair and from then on they will never cut the hair anymore. And the hair which be cut also need to disk on head. This was the hair which was never be threw away.
It was 5pm when I came back to Ping’an village，the sky was getting dark. And I came back to the hotel and finished my whole day Trekking. 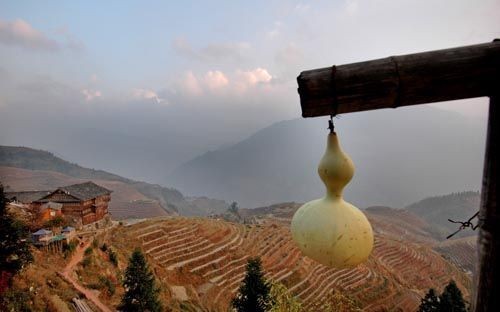 Next: Li River Hiking Trip (from Yangdi to Xingping)