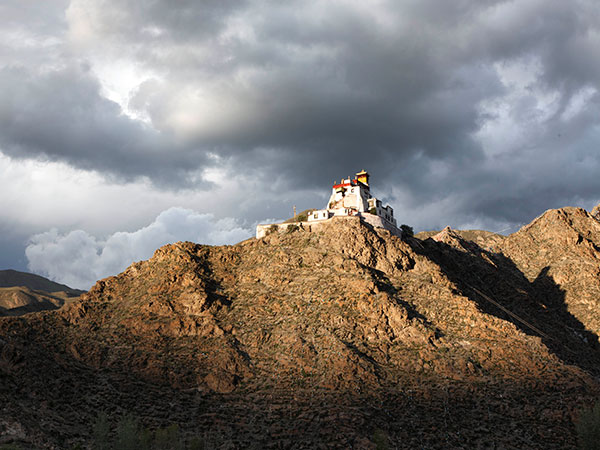 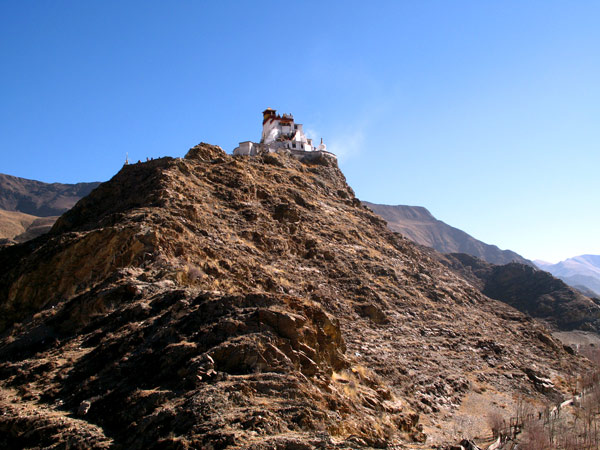 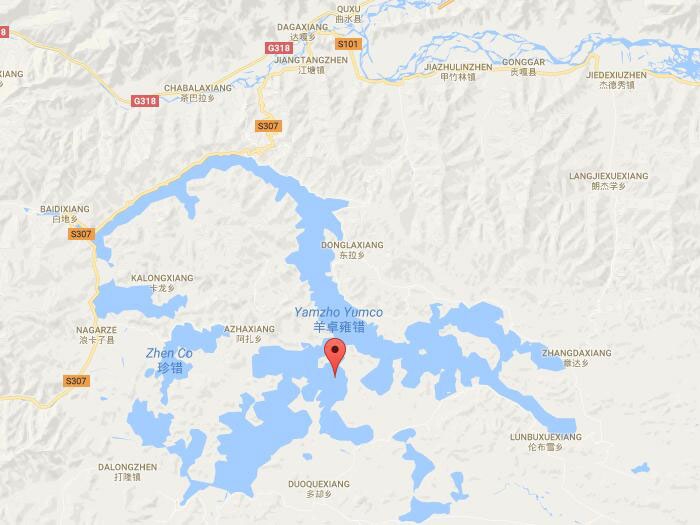 The oldest architecture in Tibet.


Perched on the summit of the Jormo Zhaxi Ceri Mountain on the east bank of the Yarlung River, Yumbulagang is the first palace in Tibet. It was built for the first Tibetan King by Bon believers in the 2nd century, and became the summer palace of King Songtsan Gampo and Princess Wencheng. Then the 5th Dalai Lama changed it to the temple of Old-Yellow Hat Sect.

According to a legend of followers of the Bon Religion, Yumbulagang was erected in the second century BC for the first Tibetan king Nyatri Tsenpo, descended from the sky. During the reign of the 28th King Lha Thothori Nyantsen in the fifth century a golden Stupa, a jewel (and/or a form to the manufacture of dough-Stupas) and a Sutra, that no one could read, felt from the sky on the roof of the building and should have called a voice of the sky: 'in five generations one should come, that understands its meaning.' Later, Yumpulagang became the summer palace of the 33rd king Songtsen Gampo and Princess Wencheng in the Tang Dynasty. After Songtsen Gampo had transferred his seat to Lhasa, Yumbulagang became a Chapel and under the reign of the 5th Dalai Lama, Ngawang Lobsang Gyatso, a monastery of the Gelugpa School.

The castle is divided into two precincts of front and rear precincts. The front is a three-storey building while the rear is dominated by a tall watchtower. Enshrined at the palace are the statues of Thiesung Sangjie Buddha, King Niechi, the first King of Tibet, Songsten Gampo and other Tubo kings.

【Watchtower style architecture】
Located in the east side of the building in the middle and it is the earliest building built by Nyatri Tsenpo. 11 meters high, 4.6 meters long from north to south, and 3.5 meters wide. Look from outer it seems like five floors, but internal as well as three floors. The first floor is 1.2 meters high, 0.6 meters wide passage lead toVajrasana, and on the second floor there is a small door go to the top of hall, third floor originally has the goldentop added by fifth dalai. The wall is thick, the building inside space is narrow, the first floor is only 2.28 square meters, second and third floor are 4.18 square meters.

【Palace】
It is said that the palace was built by Sontzen Gampo, and originally there was three floors but now repaired for tow floors.

Second floor Dharmaraja Hall also divide into two parts, the original front part has two rooms of north and south, north room is vacant and the south is stair hall. The rear part size is the same with the underlying buddhist chapel, behind the wall is a multigrid Buddha cabinet, there are maitreya, tsongkhapa, mother Buddha, padmasambhava, manjusri bronze statues. In the front of multigrid Buddha cabinet is a dharmapala cabinet, and the front of it is four vajrapani figures. Right wall has a column of bookcases, placed with Kangyur and other scriptures.

【Vihara (sleeping quarter) and annexe】
The south side of the palace is vihara, the first floor vestibular southeast corner there is one door, out of the door after folding stage and go west leads to the vihara. And the second floor close to the palace is the bedroom successive Dalai Lama lived when they had liturgy, now the room was repaired. In the more than 400 meters valley in the northeast Yumbulagang Palace, there is a glimpse of spring that not dry up all the year round, it was said that the spring was found by Sontzen Gampo senior minister Garer Stong-btsan (Blon-stong-btsan) so people still call it "Ga spring". People who visit to Yumbulagang Palace for liturgy will also visit to this spring, it is said that drinking this spring water can cure all ills.

Since it is not far from Yumbulagang to Tsetang Town of about 10 kilometers, visitors can choose a variety of ways to go. In Tsetang town there are many Santana taxi can go this route, charge 100 RMB / car back and forth. And there is still a cheaper way, which is taking motor tricycle. Of course, visitors also can ride a bicycle. The Tse-Yum road is a great black cement road, it is good even you can walk there.

When bargain with driver, you must first tell the driver how long you will stay around Yumbulagang Palace, you have better make the appointed time longer than the time you need (an hour is enough for visitors who don not take photos), so as to avoid dispute of price due to the time delay, no matter which type of car only stop to the foot of the mountain, visitors still have to climb mountain about 10 minutes.