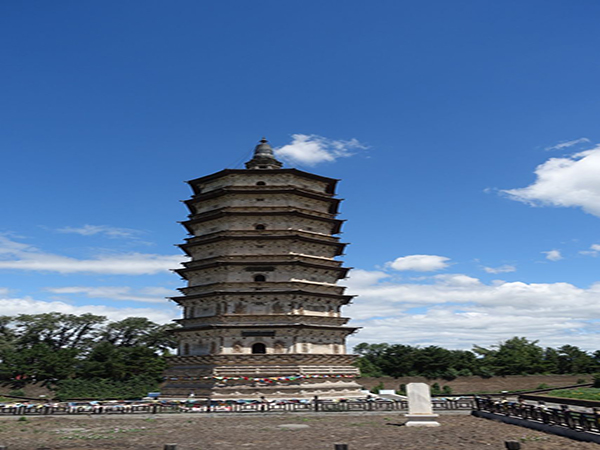 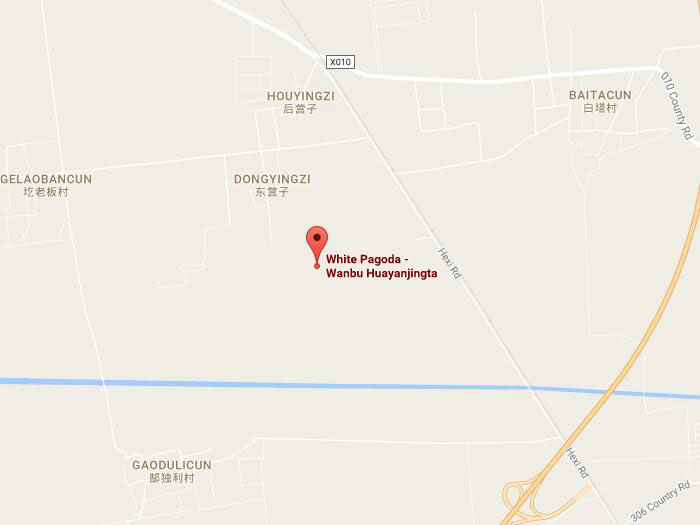 On the plain of the eastern Hohhot, there is an outstanding white pagoda penetrating the sky from the ground straightly. This pagoda is the world-famous one – Wanbu Huayanjing Pagoda (Chinese name: 万部华严经塔). Because the whole pagoda is in white color, so it is also called White Pagoda.

It is located about 18 kilometers east of downtown Hohhot and is one of eight famous sightseeing spots in the city. It is said that the 55.5-meter-high pagoda was built to preserve Buddhist scriptures. However, these are now no longer in the pagoda.

Commonly called White Pagoda, the Wanbu Huayanjing Pagoda was said to be built in Emperor Shengzong's reign (983 -- 1031) of the Liao Dynasty (916-1125). It has a high pedestal, with supine lotuss on the top, and there are spiral stairs inside and you can climb up to look far into the distance. There are two half-round arches and two square false doors on each floor. The first and second floors enshrine figures of Heavenly Kings, Hercules, and Bodhisattvas. Carved adeptly, these vivid statues are excellent artworks in the Liao Dynasty. There used to be nine contribution steles built in the Jin Dynasty (1115-1234) embedded in the first floor, but now only six remain extant. Multi-layer interlaced beams on the inner and outer walls and the center form a complete wooden frame.

Each story of the pagoda has two gates. On the door head of the south gate of the first story is embedded a plaque with the inscription, 'Wanbu Huayanjing Pagoda'. Originally, nine Jin Dynasty (1115-1234) steles were preserved on the first floor. Only six remain extant today. Inside the pagoda are also preserved some inscriptions of the Jin, Yuan, Ming and Qing Dynasties which are written in Chinese or languages of other ethnic minorities.

Bus No. 12 cam tale you to the Wanbu Huayanjing Pagoda from Hohhot directly.