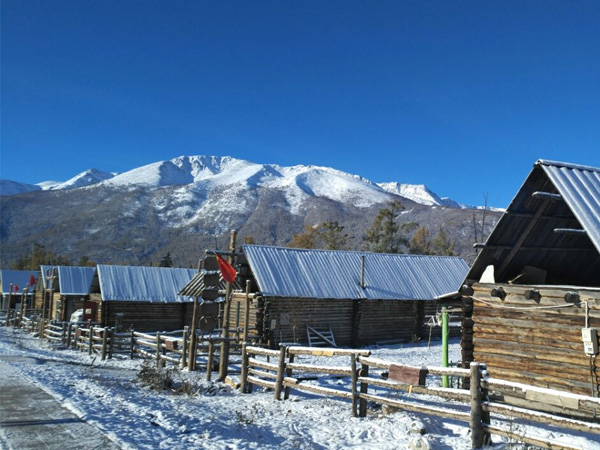 
In the beautiful Kanas Lake in Xinjiang, there are 1400 Tuwas. Kanas scenic area before development people there live in isolated world. Tuwa Kanas Village is located in the southern bank of the Kanas Lake river valley zone, 2-3 kilometers around the beautiful scenery. The environment here is very beautiful at an altitude of 1390 meters, and it is a place that must be passed from Burqin County to Kanas Lake.

In the distant Burqin County, Xinjiang Altai Kanas Lake district, home to about 2000 Tuwas. Tuwa people carry on the traditional way of life as before. Tuwa Village located between two mountains, a narrow valley just for so more than 80 people to live. It seems to be wide, because the mountain is not high, and therefore the valley village also appears serene. Behind the Village is hill, the top of the hill is snow. During the summer, snow peak is covered by light green forest. Accompanying by the afterglow, cabin with spire, Swiss style in Tuwa Village reflected a little bit warm golden glow. Cabin next to the pine trees spread scatteredly, all are tall and straight. In the village there are white birchs, scatter in the middle of the pine tree, and because of white stems, they are very conspicuous, combined with booming canopy make they like big umbrella. Behind Tuwa village is the Friendship Peak on the border between China and Russia, with Siberia wind blowing from Friendship Peak and as the terrain becomes lower with the sudden warming to breed the thick trees.
Tuwa village is a long bar shape of the village, because the wooden hut is square, the village looked square. The village path extends to the pine trees around the village. Look around this village, surrounded mountains like a pair of big hands to caress the village in the palm.
♦ History
Kanas Tuwa village residents claim to be the Mongolian, Tuwa also called “Dewa”. With a long history, it was recorded as early as in ancient literature, Sui and Tang dynasties were called “Dubo”. Some scholars think that Tuwa were left soldiers who were old, weak, ill and disabled when Genghis Khan made western expedition. Kanas village elder said actually Tuwa here and Tuva from Russia’s Tuva Republic belong to the same nation.
Tuwa who preserved its own unique lifestyle and language, Tuwa language belongs to the Altaic Turkic similar to the Kazak group, so the Tuwa people can speak the Kazak which is different from Mongolian language. School in Tuwa is basically popularized Mongolian teaching. On the habits and customs, except for the traditional Mongolian Aobao festival, there is local Zoulu Festival (winter’s day) the same as Chinese Spring Festival and the fifteenth day of the Lantern Festival. Tuwa embrace Buddhism but Shamanism also have deep influence on them.