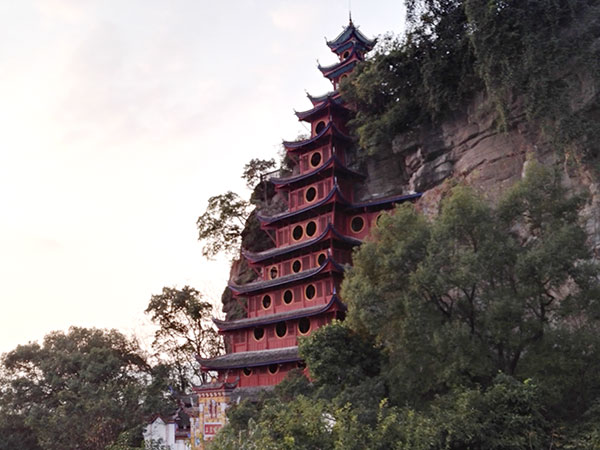 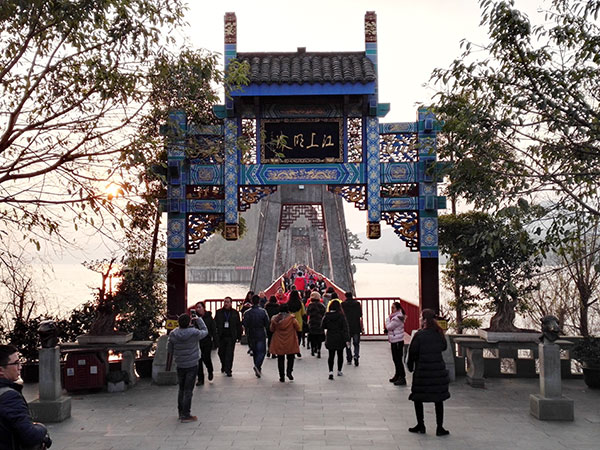 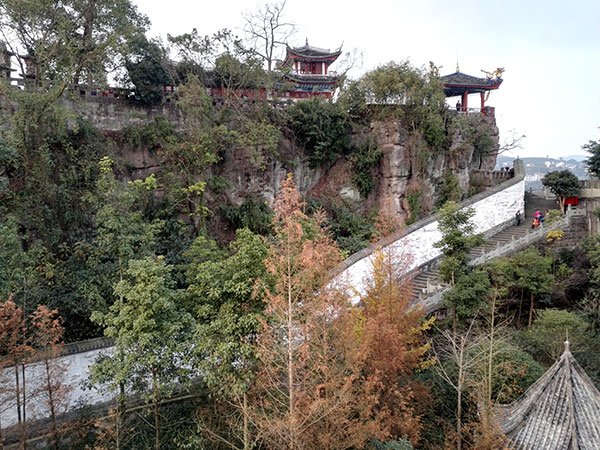 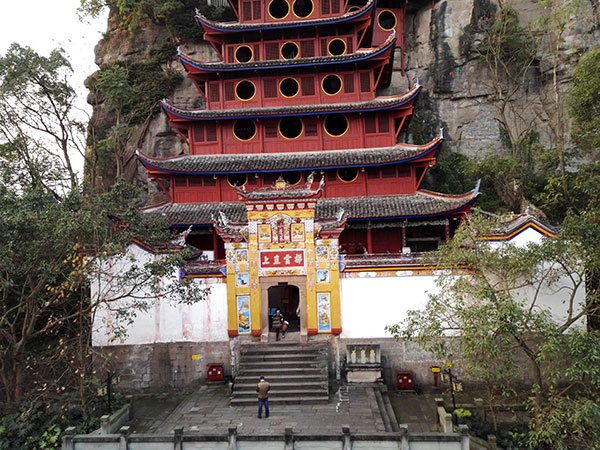 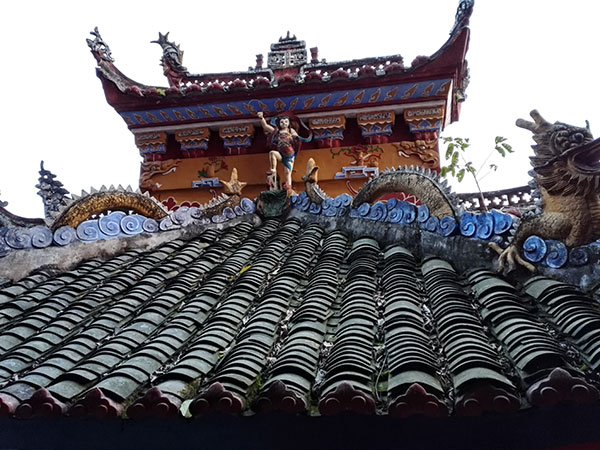 
Shibaozhai (Chinese Name: 石宝寨), literally means Stone Treasure Fortress, located in Zhong County at the south bank of the Yangtze River, 278 kilometers away from Chongqing City. It was first built in Qing Dynasty in 1750. Shibaozhai is one historical site that has a new appearance since 2009.

When the lake formed by the Three Gorges Dam is completed, most of this bluff will be under water and the temple will sit close to the lake's edge on a newly formed island. The wooden architecture stands on the riverside. It is built by catch upon a rectangular rock with sheer cliffs with a height of 56 meters and 12 stories. And every floor of the wooden structure contains interesting artifacts. Each of the 12 floors of Shibaozhai is dedicated to a famous general of the Three Kingdoms period (220A.D.-265 A.D.), a local scholar or a renowned Chinese poet.

Climbing the 12 stories is not as difficult as it may sound because you will need time to look at the paintings and sculptures on each level. Nowadays, it takes about 1.5 hours to climb from the pier to the top of Shibaozhai and round back from a back footpath. from our perspective, the statue enshrined in temple on the top flat looks not quite uniform, the reason local people enshrine GuanYu (who is known as military god in Chinese) in the first room of the temple is there was local troop gathered here, and in the second room, the Yu Huang and the baby-birthing god, maybe the enshrined statues are what the local people need most rather than what you seen in Fengdu.

In addition to the murals, sculptures in the wooden architecture, the view of the river and the farms and village below is terrific. And there were two unusual interesting features of the Shibaozhai fortress. The first is the Duck Well at the top of the hill. Supposedly you can take a duck and drop it down the well and it will re-appear swimming in the Yangtze far at the bottom of the hill. The Rice Flowing Well is the second feature. Legend has it that enough rice would flow out of the small well hole each day to feed the monks that lived in the temple and their guests. The "Stone Treasure" name is linked to this legend. However, one day a greedy monk chiseled a bigger hole in the rock, thinking he would get more rice. Of course, the rice flow ceased forever.

Ming dynasty peasant leader Tanhong was uprising, and his troop occupied here as fortress, so it named Shibao Village. Shibaozhai built during Ming dynasty, more than four hundred years ago; the village buildings built around the mountain, the eaves wings are very spectacular. The Shibaozhai pavilion, a total of 12 floors, 56 meters. On the top of Shibaozhai, there is ancient emperor temple, the wall built along the rock, lofty hall and palace, and there are showroom for cultural relics and Duck Cave and Liumi Cave, etc.

Shibaozhai is famous for its strange buildings and many interesting legends. It was listed as "one of the eight singular buildings" in the world. Since opening to the outside world in 1979, the year reception foreign visitors are nearly 220000 people, known by Chinese or foreign passengers as the "pearl upon the river".

Shibaozhai is a rising cutting butte. Early years of the Qing dynasty Qianlong period, with the aid of iron chain in the cliff, the temple was at the top of the mountain. In Jiaqing period, the emperor hired a skillful craftsman to research how to replace the iron chain and go up the mountain, and then this nine floors pavilion was built. From then on, the pilgrims and tourists may prevent climbing up by iron chain; they can go upstairs to the top of the mountain. In 1956, the pavilion was rebuilt to 12 floors, now it has become "small Penglai (a fabled abode of immortals)” that tourist scenery overlooking the Yangtze River.

Shibaozhai is located in Yangtze River north shore, Zhonggxian County, Chongqing City, 45 km from Zhongxian County. Close to the river, there is a rising huge rock over more than ten zhangs (a unit of length=3.33 meters). It is said that the rock was for a missing multicolored stone when goddess mending the sky, therefore it was called "Shi Bao (Stone Treasure in Chinese)". This stone shapes like seal, also known as the "jade seal mountain".

How to Get to Shibaozhai

【By water】 join in Yangtze River Cruise from Chongqing to Yichang, get off at Shibaozhai. Or taking speed boat from Chaotianmen Dock for 4 hours to arrive in Zhongxin County, and then transfer to bus in Zhongxian County Bus Station to Shibaozhai.

【By bus】 taking coach from Chaotianmen Transport Square Bus Station, 3 hours can reach Zhongxian County. Then transfer to bus (30 minutes a bus for about 50 minutes, and then walk for about 7 minutes can see it.