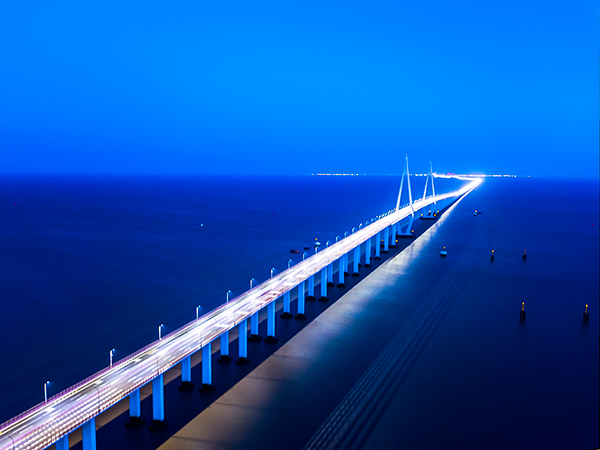 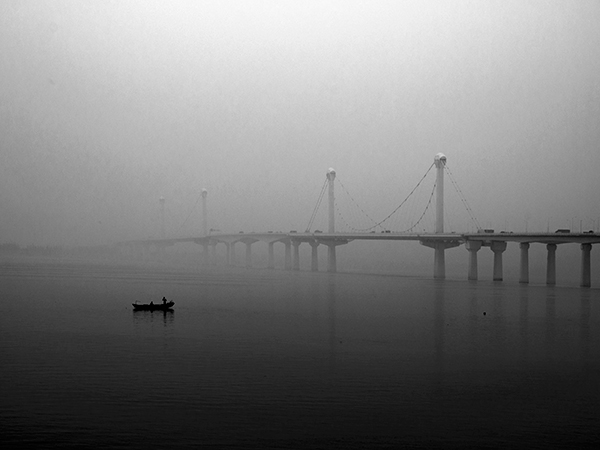 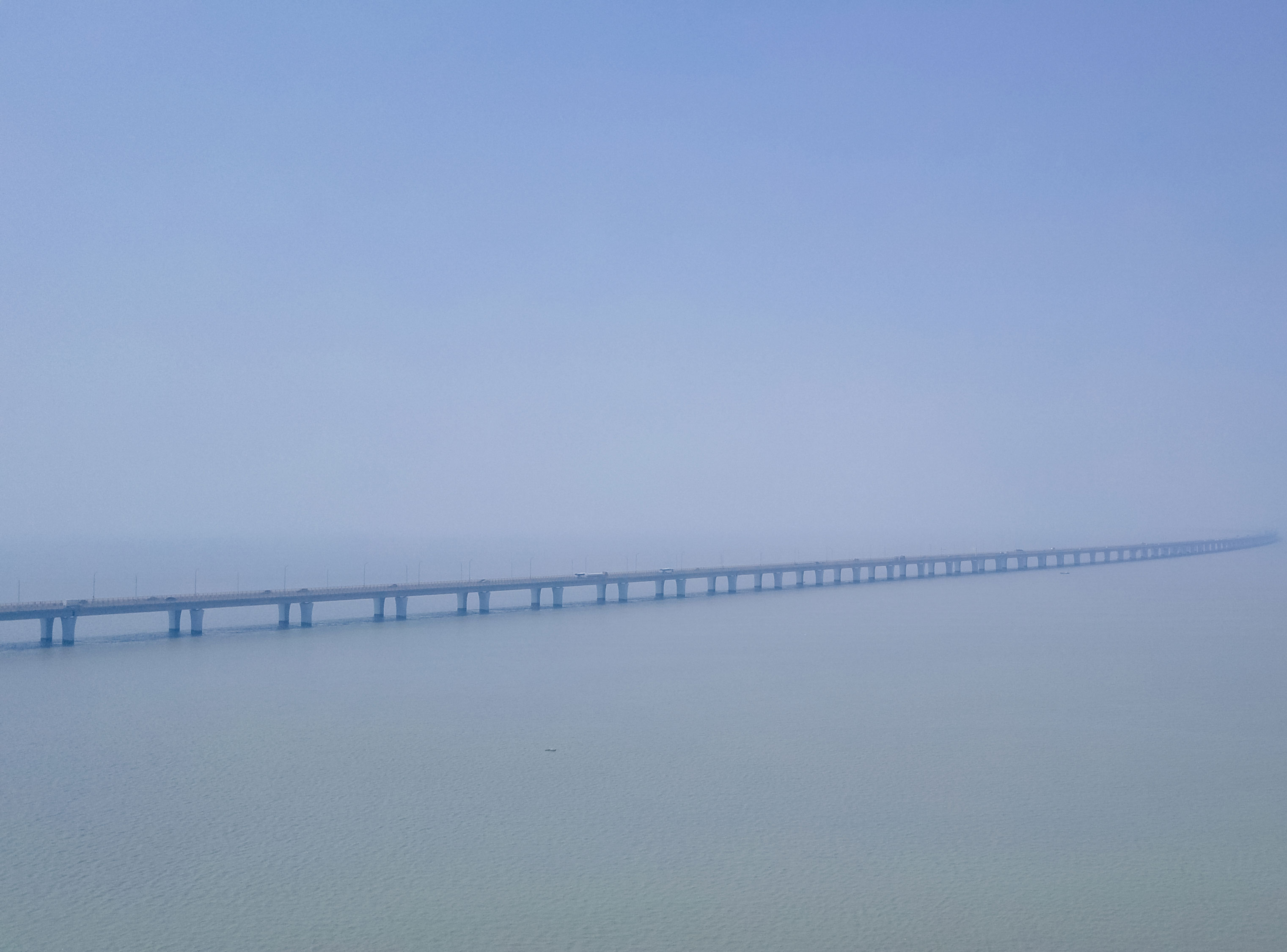 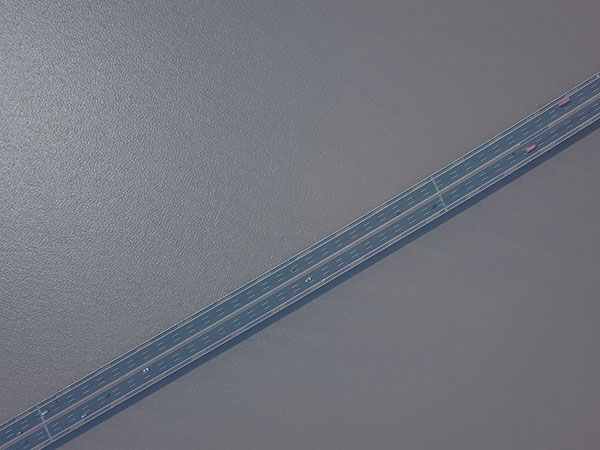 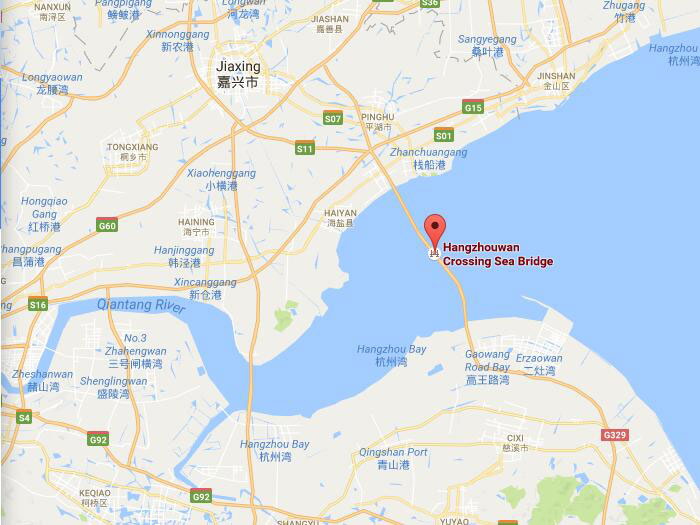 The third longest cross-sea bridge in the world.

Hangzhou Bay Bridge (Chinese name: 杭州湾大桥) is a large-scale sea-crossing bridge connecting the Zhengjiadai in Jiaxing in the north to the Shuiluwan in Ningbo in the south of Zhejiang Province, with the totally length of 36 kilometers. Hangzhou Bay Bridge ranks as the second longest cross-ocean bridge in China, next to Hong Kong- Zhuhai-Macau Brigdge, and the Lake Pontchartrain Causeway in America is the third one. Hangzhou Bay Bridge is a long highway bridge with a cable-stayed portion across Hangzhou Bay in the eastern coastal region of China.

According to the words of Wang Yong, chief director of the Hangzhou Bay Trans-Oceanic Bridge Construction Command Post, said the bridge would be one of the most important, not only in China but in the world "for it is not only the longest one (over a sea) but also will be built in the world’s most complicated sea environment, with one of the three biggest tides on Earth, the effect of typhoons and the difficult content of the sea soil".
This significant bridge shortens the highway travel distance between Ningbo and Shanghai from 400 km (249 mi) to 280 km (174 mi) and reduced travel time from 4 to 2.5 hours. With a six-lane and two-direction design, Hangzhou Bay Bridge gets a 100-year, service guaranteed with a 100km/h speed limit.

The first preparations for planning the bridge started a decade ago; close to 600 experts spent nine years on designing the Hangzhou Bay Bridge. Although the construction of the bridge had been completed on June 14, 2007 and held an opening ceremony on June 26, 2007, the bridge was not opened to public use until May 1, 2008, after a considerable period of testing and evaluation. This S-shaped bridge carried about 50,000 vehicles per day in its first year of operation.

When this important project began, there were many practical difficulties waiting to be overcome. Although there were nine-year research prepared by almost 600 experts, the challenges which were encountered during the process. The first challenge was the offshore construction. The way to solute this problem was to complete the parts and then transported them to the area for which they were built. Some components that were constructed using this process were piers, box girders (bridge panels), and even the bridge foundations.
Another challenge was the weather in the region. Aimed to prevent the erosion of the materials influenced by the wet condition, engineers used a cloth-covered template over the concrete. This would improve the color and density of the pieces, making them both more aesthetically pleasing and sturdier. To reduce cracking, engineers used low-strength early-stretching technology when constructing box girders. This technology involves casting (molding) the girder, or bridge panel, letting it harden for no more than three days, and then squeezing it before it reaches its full density. This gives the girder more room to stretch after the bridge is constructed, preventing cracks in the concrete over time.
The third major challenge faced by designers and engineers was an area of toxic methane gas that was discovered roughly 50 meters underground below the location of the bridge. No drilling could be completed before the gas pressure was alleviated. To do this, steel pipes measuring 60 cm in diameter were inserted into the ground, slowly releasing the methane six months prior to drilling.
The toll fee is 80 yuan per vehicle. As the bridge has six lanes in both directions, you can be quite sure that you will have a smooth ride. The speed limit is 100 km/62 mile.