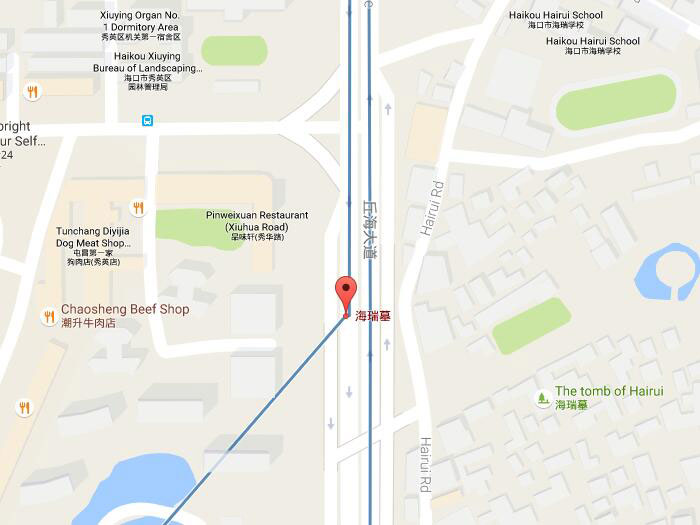 
Located in the Yabin village, Xiuying district of Haikou city, Hairui Tomb is the key national cultural protection unit, as well as one of the "Eight Sceneries" of Haikou. It has become a famous place of interest known as "Yue Dong Zheng Qi" (the integrity and upright). Hairui, the famous official in Ming dynasty, was born in Qiongshan and was known as "Hai Qingtian" (which means incorruptible official).
The tomb was built in 1589 and it is said that when people was carrying Hairui's coffin, suddenly the rope broke, and then people considered that this should be the very place where Hairui himself had chosen to be his place. Hairui Tomb has an area of 7.4 acre and all the architectures around this tomb form a solemn, simple and unsophisticated style. In the middle, there is a high honorific archway on which written four eye-striking scarlet Chinese characters "Yue Dong Zheng Qi". The grave path was paved with granites and there are three memorials on the way. On the sides of the path leading to the tomb, there stands stone statue shaped like sheep, horses, lions, tortures, and human beings. Hairui Tomb was completely built by granites, with a round top, six-angled base, a height of 3 meters, and a reducing size from up to down, thus it looks like an ancient bell. All kinds of evergreen trees were planted around the cemetery, such as coconut trees, pines, and cypresses. Hairui Cultural Exhibit Hall is also in the cemetery for visitors to look at with reverence.