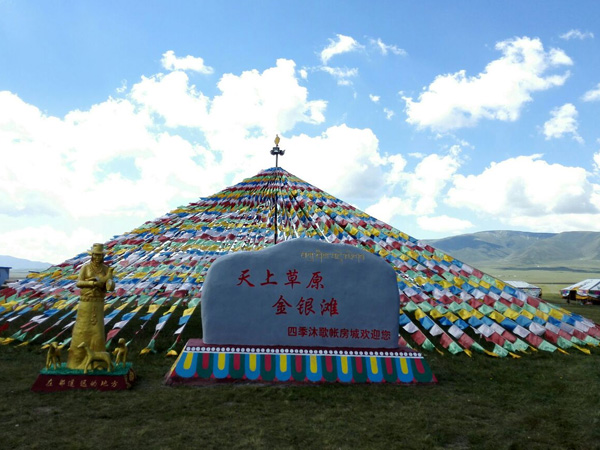 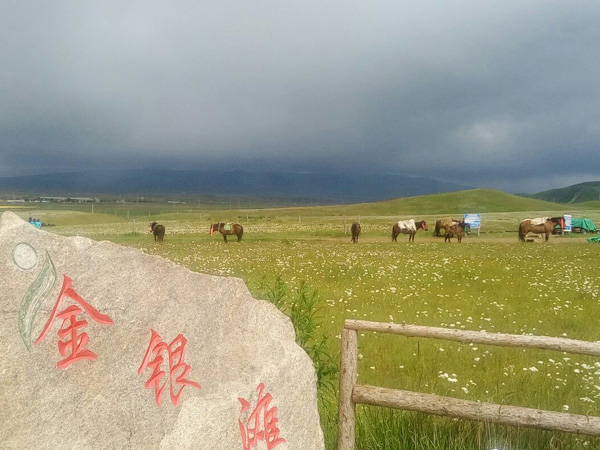 
Gold and Silver Grassland is located in Haiyan County in Haibei Tibetan Autonomous Prefecture, Qinghai Province. It is a place with a carpet of green grass. Here, the blue sky, the flowing cloud, green grass, leisurely flock of sheep or goats, flying and singing birds give tourists a poetic and picturesque feeling.

The grassland covers nearly 1200 square kilometers. In its north is the snow-capped Qilian Mountain; its south is the wide Qinghai Lake, its east is connected with Xining City; and its west is the boundless Qaidam Great Basin. This tourism area has vast and beautiful grassland, enthusiastic and romantic herdsman, quite and bleak snow plateau, and ruins of Xihai County which has 2000 years history - Triangle City.

The Golden Beach is divided into Gold Beach and Sliver Beach; its average elevation is about 3200 meters. On the north grass land there are full of golden flowers; therefore, it is called the gold beach. On the south grass land there are full of silver flowers; hence, it is known as the Sliver Beach. Each summer, the wild flowers in full bloom, look like a golden and silver grass land, hence, the grassland got its name "Gold and Silver Grassland".

The Gold and Silver Grassland is a typical pastoral area. Tibetan brothers have lived in this hot spot from generation to generation, and more than 0.3 million flocks and herds are living here. Also, it is China's first nuclear weapons development base.

The Golden Beach is a wonderful place letting a person producing a variety of suspense. The golden season to travel here is on July, August and September; while during these months, the flowers are in full bloom and the birds is flying, especially the lark birds are singing, beautiful and charming. The flock of sheep or goats looks like flowing cloud; the brown and black yaks stroll in the grass and wild flowers.