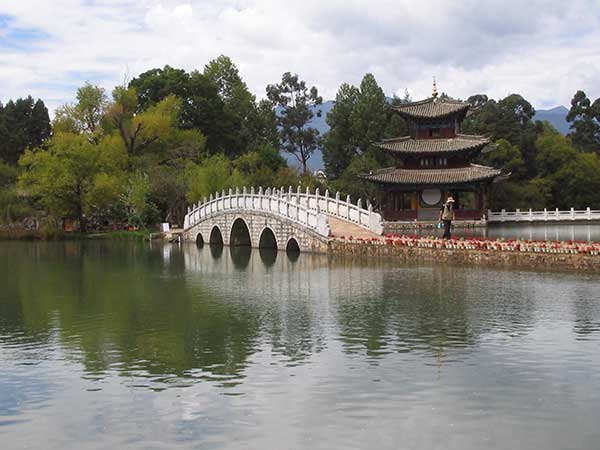 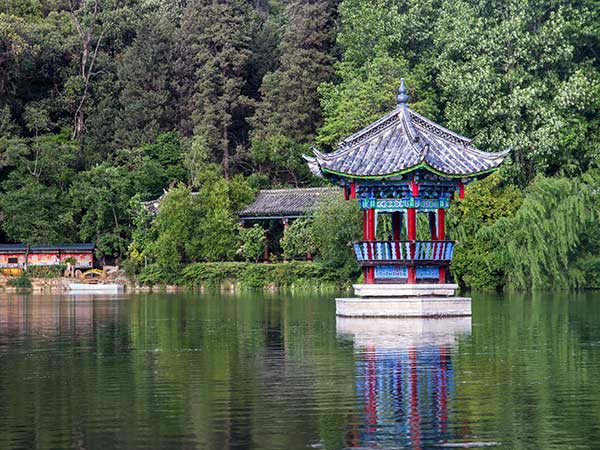 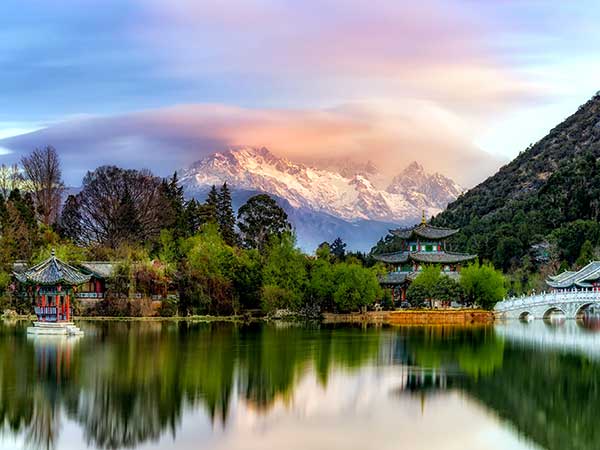 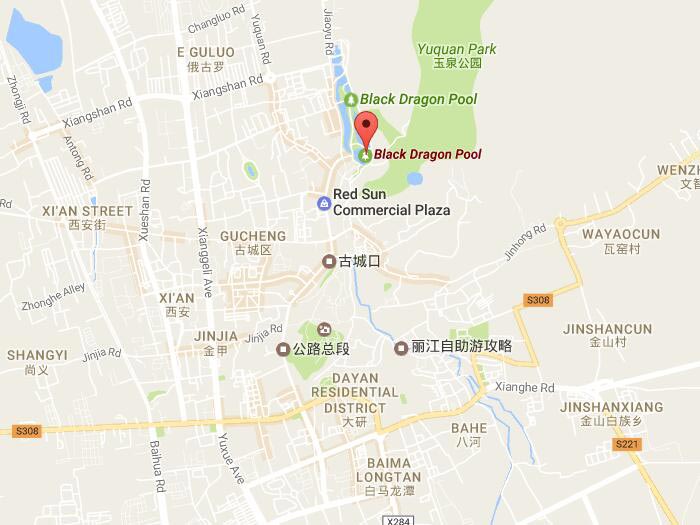 
Black Dragon Pool (Chinese Name: 黑龙潭) is the landmark of Lijiang. The pool is listed in the Collections of Famous Pools of China because of its exquisite beauty. Its surroundings are all green with grass and shaded by swaying willow trees. In its waters, the Jade Dragon Snow Mountain is reflected. At the far side of the pool, there are renovated buildings used for art exhibition such as the Moon-Embracing Pavilion with its own white marble bridge across the water, and the Five-Phoenix Temple built during the Ming Dynasty.

An ancient legend lends the Black Dragon Pool its name; it is said that a long time ago there were ten wicked dragons that caused much destruction and did great harm to people. One day, one of the Eight Immortals of the Chinese legend "Lu Dongbin" subdued nine of the dragons and jailed them in a tower. Only the youngest black dragon was left, charging with protecting and benefiting the people as the price of its freedom. This dragon is believed living in the Black Dragon Pool till today. The pool is divided into two parts by a bridge, and although the water is connected, the two sides are different colors and the fish in either side never swim to the opposite part of the pool. Moreover, for hundreds of years, this wondrous pool has never dried up, even in drought years.

One can see arbours and pavilions beside the pond, temples hidden in the trees and variegated flowers found everywhere. “A tree of cherry blossom accompanies a tree of willow, while a rose climbs to the tip of one of a tree's twigs." That is how the calm and exquisite view of the place is described. In Black Dragon Pool Park, the water is lucid as jade and reflects those elegant traditional garden buildings. Along the river bank, a natural flower carpet decorate fairyland. It is therefore praised thus “At Yuchuan the flowers of the four seasons are like embroidered brocade.”

Black Dragon Pool was built in the Qing dynasty Qianlong period second year (1737), and in Qianlong period sixtieth year and Guangxu period eighteenth year Black Pool was repaired according to the records. Its old name was Longwang Temple (King of Dragon Temple), because emperor Jiaqing and Guangxu named "god of dragon", so the temple later renamed Black Dragon Pool.

Black Dragon Pool is located in the northern suburbs of Kunming city at the foot of Longquan Mountain. "History of Han · Geography" recorded, there is a Heishui Temple in the northwest of Dianchi County Yizhou Prefecture. That is, Heishui Temple of the Han dynasty is Black Dragon Pool Taoist Temple now, and it is the first historic interest in Yunnan province. Because according to legend that dragon king of Yunnan—black dragon’s palace was in here, and the pool was not exhausted all year round, so it was called "Black Dragon Pool".

Since the Tang and Song dynasty, people in Kunming region went to Black Dragon Pool to pray for rain. The early Ming dyansty, Yunnan loyal official Mu largely built many buildings here, and changed the name of “Dragon Shrines” to the “Black Dragon Palace”, and the whole Dragon Pool Temple began to take shape. Since then, during the Ming and Qing dynasties, Yunnan civil and military governors repaired Dragon Pool Temple for many times, and improved regulation constantly. During the period of the republic of China, here was called Dragon Pool Park.

Now Black Dragon Pool buildings are divided into up and down two Taoist temples. Down temple "Black Dragon Palace", which was said that built in 1454, was a type of building with one hall with two enclosed courtyards. Outer courtyard had a censer, engraved with eight diagrams, on both sides are the big dipper figure, these are the Taoism used to ward off evil spirits. In the inner courtyard patio pool there is a vivid paddled black dragon carving. Legend has it that it is the Du Dragon King in charge of Yunnan clouds and rainfalls.

In front of the Black Dragon Palace is the pool. Two pools in the front and back are interlinked, separated by a stone bridge in the middle. On the left is the muddy pool, it is the area of 2600 square meters, the depth of the water up to 50 centimeters.

On the right is the clear pool, with 600 square meters, the average water depth is 7 meters and the deepest can up to 11 meters, storage capacity of 4400 cubic meters. It is Black Dragon Pool. Two pools connected to the water, and due to distinct color of water, it looks like a Taoist diagram of the universe. This is mainly because the clear pool is deep, springs come out by the pool bottom, so the water is clear; And muddy pool water is shallow and have mud into the pool after raining along the hillside, so the water is muddy. Standing on the bridge can find a rare sight: “there is no interaction of fishes between two pools, a bridge cut the water from two pools and the colors in two pools are different.”

【Dragon Shrine】
Dragon Shrine is the main building of Black Dragon Pool, including stage, Deyue Building (Getting Moon Building), distributed on the axis line. Dragon Shrine faces west, it is a type of building with quadrangle courtyard and two patios, and there is gate, two wing-rooms and hall. The hall is single eave hipped-gable roof, three rooms wide, in the front is platform, and verandas surrounded are connected.

【Activity in Black Dragon Pool】 in every March there is dragon king temple fair.

【Best Time to Travel】 from May to November is the best time to visit Black Dragon Pool, people can see mountain flowers in full bloom in summer, enjoy the fresh air and clear sky in autumn. Autumn is also the most beautiful season in Lijiang, moderate temperature, clear sky and crisp air, colorful trees and flowers, silhouetted against Jade Dragon Snow Mountain far away.

【How to Get to Black Dragon Pool】 In Kunming city, peole can take public buc No.9 to the park directly, in the North Railway Station, there is midibus to the park.