Yandunjiao, also called Beacon Corner, a small fishing village in Rongcheng City, is located in the easternmost end of the Shandong Peninsula. In the Ming Dynasty, a beacon tower ("yandun" in Chinese) was built on top of the mountain, from which Yandunjiao got its name. Yandunjiao is adjacent to the Huanghai Sea, Bohai Sea, and Donghai Sea, which owns the advantage of rich aquatic resources. The abundant marine resources and the warm temperate monsoon climate provide it a natural and good winter environment for whooper swans, which makes it the largest wintering paradise. Rongcheng Swan National Nature Reserve locates in Yandunjiao.

This is a fishing village that the man is in harmony with nature. Since hundreds of Whooper Swans live here through the winter every year, people can have close contact with swans, which crowns Yandunjiao a good reputation of Swan Village and attracts many shutterbugs'admiration. This article will show you some practical tips for a photography tour to Yandunjiao. 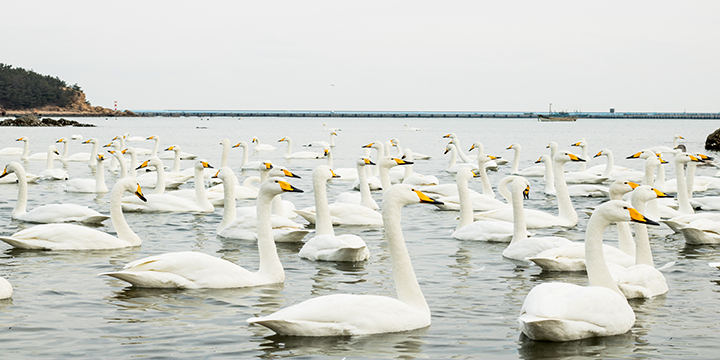 Whooper Swan (Cygnus Cygnus): A migratory bird belongs to Aves, Anatidae, Cygnus, no subspecies differentiation. It owns a large figure with a length of 140 to 165 centimeters (55 to 65 inches), a wingspan of 205 to 275 centimeters (81 to108 inches) and a weight of 8 to 12 kilograms. It has a more angular head shape and a beak that always shows more yellow than black, while the Tundra Swan has more black than yellow. Like their close relatives, whooper swans are vocal birds with a call similar to the Trumpeter Swan.

The Whooper Swan lives in the shallow and open waters where aquatic plants flourish. They like clustering and often live in groups except for the breeding period, especially in winter, often show the activities as a family group. They mainly eat leaves, stems, seeds, and roots of aquatic plants. In addition to plant food, they also eat a small amount of animal food, such as mollusks, aquatic insects, and other aquatic invertebrates. 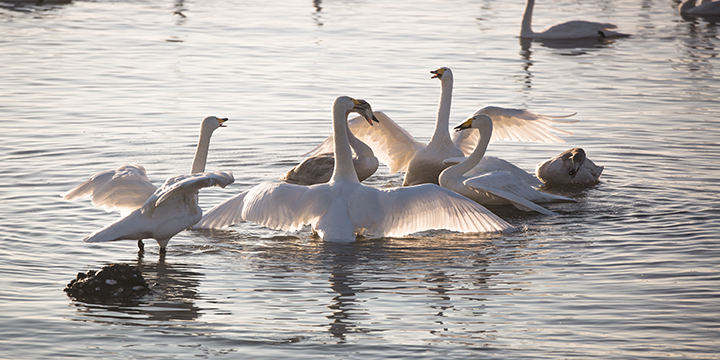 Best Time to Shoot the Whooper Swan in Yandunjiao

The Whooper Swan is the migratory bird. In late September, they start to leave the breeding ground and migrate to the overwintering area and arrive in late October to early November. At the end of February and early March of the next year, they leave the overwintering area to migrate to the breeding area and arrive at the end of March and early April. They often move as small groups or family groups of more than 6-20. Their flying altitude is high, and the formation is neat, often in the form of "I", "Y" and "V". The migration mainly follows the lakes, rivers, and other water areas, with continuous stops and foraging along the way, so their migration lasts for a long time. 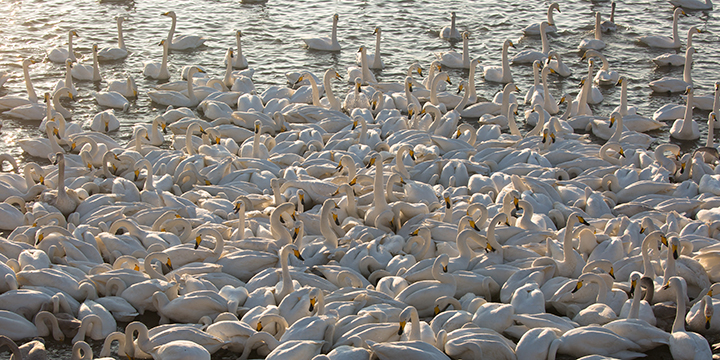 Every November, the Whooper Swan migrates from Siberia to Rongcheng. They stay in Yandunjiao until March next year. This is the best time to shoot the swans. If there is heavy snow, it will be a rare good time to shoot swans in the snow.

Where to Shoot the Whooper Swan in Yandunjiao

In Yandunjiao, people could not only feel the pleasure of the dancing swans, but also could live in seaweed houses with a history of hundreds of years, savoring the special fishing folk customs. There are several places in Yandunjiao where are the perfect combinations of natural scenery and elegant swans. 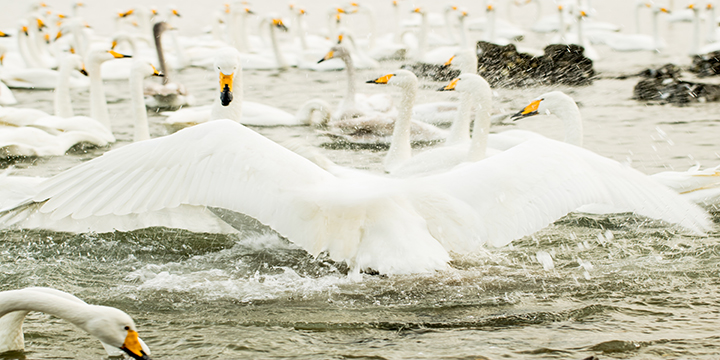 Yandunjiao Swan Lake is located in a small bay of the Huanghai Sea, covering less than one square kilometer. There are two freshwater streams flowing into the bay on both sides. The clear water, soft waves, and abundant marine resources provide a suitable natural environment for the inhabitant of the swans. The groups of swans come here for overwintering at snowing season. In the bay with blue waves, they chase the streams, sing loudly, soar in the air, and dance in the sky, which makes people feel like being in a fairyland. The fishermen in the village regard the swan as a good friend, everyone is close to the swan, and everyone loves the swan. The advantage of natural condition and people's attitude make Yandunjiao the first option for the photographers.

Rongcheng Swan Lake is a national AAA tourist attraction, and it is also one of the largest overwintering habitats of swan in northern China. Swan Lake is a natural lagoon with an average water depth of 2 meters. The average water temperature in January is 0-9 ℃, and the lake surface rarely freezes. There are a large number of small fish, shrimp, and plankton in the lake, which is the ideal place for the Swan to live in winter. From November, the swans continue to fly here for the winter, at most in January next year, as many as tens of thousands, and the whole lake turns white. White swans are lofty and holy, lying or standing, swimming or walking, flying or running, rubbing their necks, and singing with their wings, which is a magnificent view. If the lake were frozen and it was snowing, the swans and the vast snow would form a romantic picture.

How to Choose the Photography Equipment

It is recommended to bring the photography equipment to shoot the whooper swans.

How to Use the Light

Early morning and dawn would provide the best light to shoot the swans. The sunrise will have a good performance in the condition of direct light and backlight. The exposure should be changed with the environment, and the exposure shall be reduced in the smooth light and increased in the reverse light.

How to Associate the Photometry, Focusing and Shutter

How to Compose a Picture

Plan a Photography Tour to Yandunjiao

It is convenient to get to Rongcheng from other cities with many flights and high-speed rails. And it is only 35 km (40 mins driving) from Rongcheng to Yandunjiao. Usually, we would recommend a 4 Days Winter Photography Tour to Yandunjiao as below: