Poyang Lake is China's largest freshwater lake, located in the north of Jiangxi Province, with an area of 4,125 square kilometers. The Poyang Lake scenic area contains 41 islands and 7 nature reserves. There are more than 300 species of migratory birds in Poyang Lake reserve, nearly one million birds, including more than 50 kinds of rare birds. Poyang Lake has already been the largest bird reserve in the world.

What is White Crane

The white crane, also called the Siberian white crane, (scientific name: Grus leucogeranus) belongs to a large wading bird, which is slightly smaller than the red-crowned crane, with a body length of 130-140 cm. When standing, the whole body is white, the chest and forehead are bright red, the mouth and feet are dark red. When flying, the wingtips are black, and the rest of the feathers are white. They inhabit in the open plain marsh grassland, tundra swamp, large lake rock and shallow water swamp acting alone, in pairs, or in family groups. The migration season and winter season often integrate large groups of tens or even hundreds of white cranes, especially at the stopover stations and overwintering sites. They mainly eat the stems and roots of plants such as bitter grass, kohlrabi, carex and water chestnut, etc. They also eat leaves, buds and aquatic plants, small amounts of mussels, snails, mollusks, insects, crustaceans and other animals. White cranes are majorly distributed in China, India, Iran, Afghanistan and Japan.

When is the Migratory Time of White Cranes

The good wetland ecosystem and biodiversity in the Poyang Lake area provide white cranes with a suitable habitat and rich food supply. At the beginning of November, the White Crane usually starts from Siberia through the eastern migratory route like Inner Mongolia, Jilin and finally reaches Poyang Lake. They stay at Poyang Lake for almost 5 months every year. 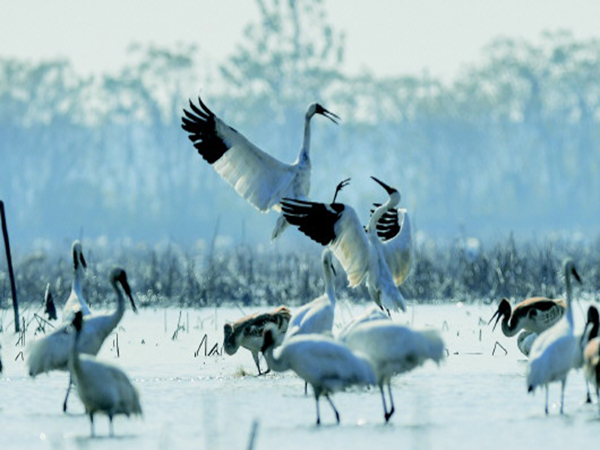 Where to Shoot the White Cranes

The National Poyang Lake Migratory Birds Reserve was built in Wucheng, Yongxiu County, and Wucheng is a famous reserve center for shooting migratory birds. Lakes such as Dahuchi, Benghu in Wucheng, the grasslands around the lakes and beaches are ideal places for migratory birds to overwinter. White cranes and the world's largest swarm of wild geese inhabit here, forming a magnificent view of hundreds of birds flying together. Therefore, it is one of the best places to shoot the white cranes.

Gongqingcheng City is a famous hometown of abundant fish and rice on the shore of Poyang Lake. The South Lake Wetland Nature Reserve is located in Gongqingcheng. Every autumn, there are tens of thousands of 29 species of national first-level and second-level migratory birds gathered here and more than 70% of the white cranes in the world overwinter in Gongqing South Lake Wetland Nature Reserve.

The Shahushan Migratory Bird Watching Area is the main wetland where the wintering migratory birds of Poyang Lake inhabit. More than 100 species of migratory birds come here for wintering, including white cranes, oriental white storks, white-tailed sea eagles, cygnets and little swans etc. It is one of the largest migratory bird wintering places in Asia.