Dashanbao Nature Reserve is located in Dashanbao Town, Zhaotong City, Yunnan Province, with an average elevation of 3,000 meters. Dashanbao is of the subalpine wetland ecosystem with the highest height for the wintering black-necked cranes in China. There are large swamps in Dashanbao which are known as the "Kidney of the Earth" and have become the ideal wintering habitats for the endangered black-necked cranes in the world. If you're looking for great birding spots in China, we suggest you have a photography tour to Dashanbao.

Dashanbao is selected as the "Hometown of Chinese Black-necked Cranes". About 1,400 black-necked cranes overwinter here every year, accounting for about one-sixth of the global total. At the same time, there are a large number of other migratory birds such as bar-headed goose, red duck and mallard overwintering here, as well as a large number of gray cranes and red-billed gulls waiting for transit in Dashanbao. Therefore, Dashanbao is a popular destination to photograph migratory black-necked cranes and other migratory birds.

According to the research, the black-necked cranes' migration routes can be divided into the eastern, central and western route. The migration of the eastern route is from Zoigai Songpan Grassland along the Minjiang River Basin and Mt. Qionglai from the north to the south, through Leshan and Yibin, and overwintering in the lake and reservoir in Mt. Wumeng area. Dashanbao is one of the major reserves of Mt. Wumeng area. The straight-line distance is about 800 kilometers. The eastern route has the largest number of breeding and wintering black-necked cranes, which is from Longbao Beach in Qinghai to Napa in Yunnan, the distance is similar to the eastern route , about 800 kilometers.

The most special one is the western route, which is a cross-border route that crosses the roof of the world. The black-necked cranes move to the south or southeast from the plateaus of southeastern Xinjiang, western Qinghai, northern Tibet, and northwestern Tibet. Part of them goes to the lower middle elevations of the Yarlung Zangbo River and its tributary valleys, while the rest fly over the Himalayas to Bhutan for winter. Although the straight-line distance of the western line is the shortest, their flying height is beyond the reach of other cranes in the world. 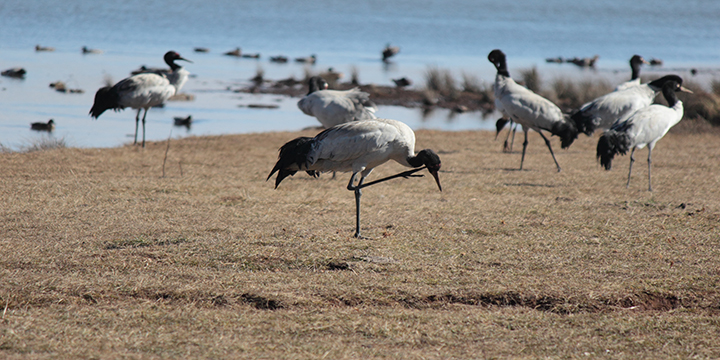 The black-necked crane (scientific name: Grus nigricollis), also called Tibetan Crane, is a large wading bird with a body length of 110-120 cm and a weight of 4-6 kg. The body feathers are grey, the head, front neck and flying feathers are black, and the tail feathers are brown-black. The bare area in front of the head is dark red.

Black-necked cranes inhabit plateau swamps, lakes, and floodplains at an altitude of 2500-5000 meters, and mainly eat plant leaves, rhizomes, hydrangeas, tubers, algae, corn and sand. They breed in Ladakh, Tibet, Qinghai, Gansu, and northern Sichuan, winter in northeastern India, southern Tibet, Guizhou and Yunnan. As we can see, the black-necked cranes are the only birds in the world that breed and winter in plateau areas.

When is the Migratory Time of Black-necked Crane

Every year in October, the temperature on the plateau starts to drop sharply, and the black-necked cranes will bring the young birds that have just grown up and form groups with other families, fly over heavy mountains then reach the plateaus with a warm climate.

Where to Shoot the Black-necked Cranes

The Tiaouedunhe Reservoir is located in the west of the Dashanbao, 6 kilometers away from the township government. It was built in 1989. The water collecting area is 17.7 square kilometers, the water storage area is 3.375 square kilometers, and the reservoir capacity is 12.36 million cubic meters. It is the largest wetland in Dashanbao and one of the important overnight and foraging places for black-necked cranes.